Please ensure Javascript is enabled for purposes of website accessibility
Log In Help Join The Motley Fool
Free Article Join Over 1 Million Premium Members And Get More In-Depth Stock Guidance and Research
By Will Healy – Aug 17, 2021 at 10:59AM

AMC Entertainment has made investors money, but can it turn small investors into millionaires?

AMC Entertainment (AMC -2.96%) captured the attention of retail traders earlier this year when it caught a meme stock wave and shot up from a low of just under $2 per share in January to a high of about $72 per share in May. At its current price in the low $30s per-share range, it has fallen by nearly 60% from its highs. However, since it still trades 16 times higher than its January low, one might question whether it holds the potential for something more.

Can stock in this movie theater chain help some of its shareholders become millionaires by 2030? 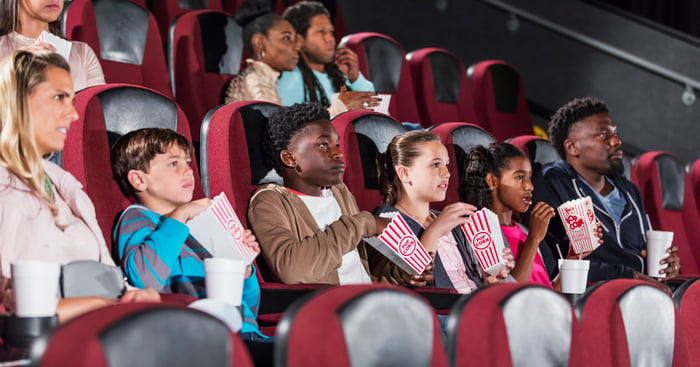 The state of AMC Entertainment

AMC faced unprecedented pain in 2020 as the COVID-19 pandemic forced theater closures around the world. To get through this challenging time, it resorted to a massive share issuance. At the end of June 2020, shares outstanding stood at just above 104 million. Today, the company has 513 million shares available to trade. Unfortunately, AMC issued most of those shares before the spike in the stock price.

Moreover, home theaters have become popular as sound and video systems have become more advanced. This gives moviegoers less of a need to visit theaters. Furthermore, amid COVID-19 closures, studios released many movies straight to streaming, bypassing theaters that usually held a claim on new releases. Fortunately for AMC, a recent agreement with AT&T's Warner Bros. to give theaters 45 days of exclusivity on new releases beginning in 2022 could help mitigate that issue.

AMC by the numbers

Still, the pandemic continued to have lingering effects on revenue for the first two quarters of the year. AMC's revenue over six months, which came in at $593 million, fell 38% compared with the first six months of 2020. Nonetheless, with 62% lower operating costs during that period, the company cut its net loss by two-thirds during that period to $911 million.

Additionally, the company reported a record $2 billion in liquidity. While its corporate borrowings of $5.5 billion remain a burden, they have fallen from $5.7 billion at the end of 2020 as the previously mentioned stock issuances helped keep the company afloat.

Management also said on the second-quarter 2021 earnings call that attendance was at 23% of 2019 levels. However, while the company did not offer specific guidance, admission revenue has reached 57% so far in Q3, up from 18% in Q2. Also, the company forecasts positive theater-level cash flow by Q4.

Nonetheless, even as the revenue gain points to a recovery in the business, investors have to wonder what comes next? The Reddit online investing-focused forum WallStreetBets has fostered discussion among a passionate group of AMC bulls. Their support of the stock helped to take it to record levels in May. However, the fact that the stock has lost most of its gains since that time could point to the limited influence of these traders.

Moreover, we now live in a world where people can turn to other entertainment options such as online videos and the increased options for gaming. Such trends will likely become more pronounced by 2030.

Additionally, the current stock price points to the difficulty of turning small shareholders into millionaires with this stock. Suppose a trader was fortunate enough to buy 5,000 shares at $2 per share in January, creating a $10,000 initial position. That investor would need AMC to rise to at least $200 per share to manifest a $1 million position. Also, this scenario does not consider those who invest $10,000 in AMC today. They would need the share price to rise above $4,000 per share to reach millionaire status.

On the outside chance that AMC stock could keep doubling in value four times in seven months, as it has since January, reaching a $1 million position by 2030 is a reachable feat for any investor. However, doubling values come much more easily at $2 per share than at $32 per share. Also, with the aforementioned business conditions working against AMC, it is difficult to envision how the company will derive the sustained revenue and earnings growth necessary to reach and maintain such growth levels.

Few investors believed AMC would reach $72 per share early this year. Hence, with enough momentum, one cannot say that $200 per share or even $2,000 per share is impossible.

However, the aftereffects of the 2020 shutdowns make reaching such share levels highly improbable. And even though AMC continues to recover, recovery does not equate to prosperity. Given the lack of a visible path to sustained growth, investors should not expect help from AMC in their quest for $1 million, and taking the timeline out to 2030 or any other year will likely not help this entertainment stock.