Please ensure Javascript is enabled for purposes of website accessibility
Log In Help Join The Motley Fool
Free Article Join Over 1 Million Premium Members And Get More In-Depth Stock Guidance and Research
By Will Healy – Updated Aug 17, 2021 at 10:08AM

These technology companies should deliver significant returns over time.

A savings of $3,000 will no longer buy a full share of Amazon. However, it can help a technology investor start buying other stocks. Moreover, many tech stocks continue to offer both a reasonable valuation and substantial growth potential. For this reason, stock pickers looking to invest $3,000 productively should consider names such as Broadcom (AVGO -0.70%) and Pinterest (PINS -0.16%). 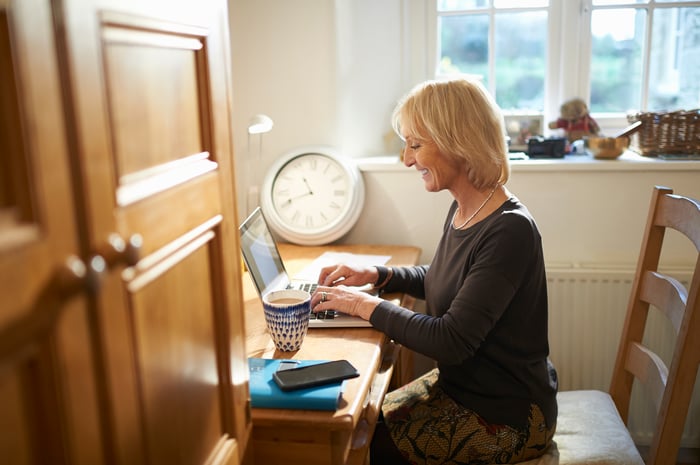 Of the two stocks on this list, Broadcom is probably the least familiar name to the retail investor. Its focus on semiconductors and software gives the company few reasons to market to the general public.

However, it affects the public behind the scenes. Broadcom invests billions in research and development every year on improving processes and developing products. It also employs engineers near its largest customers to collaboratively create products to serve these clients.

During the first two quarters of the year, products from both divisions brought in a combined $13.3 billion in net revenue, leading to a 14% increase compared with the first six months of 2020. Also, its net income of $2.9 billion nearly tripled during the same period as reducing operating expenses by 14% (which includes a 40% reduction in selling, general, and administrative expenses) provided an income boost.

The fact that Broadcom only offered one quarter of guidance may point to some uncertainty. However, it forecasts revenue will climb 16% in Q3 compared with the same quarter in 2020.

Moreover, it maintains a $14.40 per share annual payout that yields a cash return of about 3%. This payout has risen every year since 2010, and the company's $6.4 billion in free cash flow during the first two quarters easily covers the $3.1 billion cost of the payout during that time.

Such conditions could make it worth paying 45 times earnings, especially considering the 50% increase in the stock price over the last 12 months. With a rising dividend and a continuing focus on R&D, it should remain attractive to new investors.

Pinterest is a social media site driven by the imaginations of its users. Users "pin" ideas they like and other hints of inspiration. The company derives revenue through promoted pins, which are ads driven by those bursts of creativity.

The site attracts strong interest from women, though men and Generation Z are its fastest-growing groups. Furthermore, 45% of Americans earning more than $100,000 annually use the site.

Knowing its demographic profile, one can understand why global monthly active users (MAUs) at the end of Q2 came in at 454 million. That was a 9% increase from year-ago levels and accounts for the 5% decline in MAUs in its U.S. segment.

However, investors should keep the unusual effects of COVID-19 in mind. MAUs grew 48% in 2020 compared with the previous year. Now, consumers who spent the pandemic primarily in lockdown have spent more time away from their computers. Nonetheless, this trend has not amounted to an across-the-board negative for Pinterest. On the Q2 2021 earnings call, CEO Ben Silbermann stated that mobile Pinterest use still grew by more than 20%.

Additionally, the average revenue per user (ARPU) remains a success story for the company. Revenue for the first two quarters of 2021 came in at just under $1.1 billion. This was a 102% increase from the first six months of 2020 driven primarily by rising ARPU. In Q2, the ARPU of $1.32 climbed 89% from year-ago levels.

Pinterest also reported a net income of $48 million during that period, a massive improvement from the $242 million loss in the same period last year. Slowing the growth in operating costs helped the company to turn profitable.

Still, with COVID-19 cases surging, the company declined to offer any guidance for future quarters. The fact that the stock has fallen 14% so far this year (amid a 12-month increase of almost 65%) could also give investors pause.

Still, Pinterest's price-to-sales (P/S) ratio of 16 is its lowest sales multiple in more than a year. Moreover, it is only marginally higher than Twitter's 12 P/S ratio and well below Snap's multiple of 34. If it can maintain robust ARPU growth and return to double-digit increases in MAUs, Pinterest stock should easily resume its climb.