Joby is its own company now. Its future is in its own hands -- and that's both good and bad news.

Shares of Joby Aviation (JOBY 1.23%) surged in early trading Tuesday -- up 15% in the first few minutes, then falling as far as flat against Monday's close by about 10:30 a.m. EDT. The shares seem to be perking up again as I type these words, but where they'll end up at day's end is anybody's guess.

Indeed, volatility has been the name of the game at this start-up air taxi service. Since it announced its plans to IPO through a reverse merger with a special purpose acquisition company (SPAC) back in February, shares of the Reinvent Technology Partners SPAC (which at the time traded as a proxy for Joby) have spiked as much as 57%, only to fall back and trade roughly flat against their own offer price for months on end.

Joby stock got another boost last week, when it finally consummated its merger with Reinvent on Wednesday, approaching highs near $14 a share -- perhaps briefly reminding investors why they got excited about the stock in the first place. In the aftermath of the event, however, investors seem to have lost attention. The stock quickly lost steam and fell back toward the SPAC's $10 offer price once again. 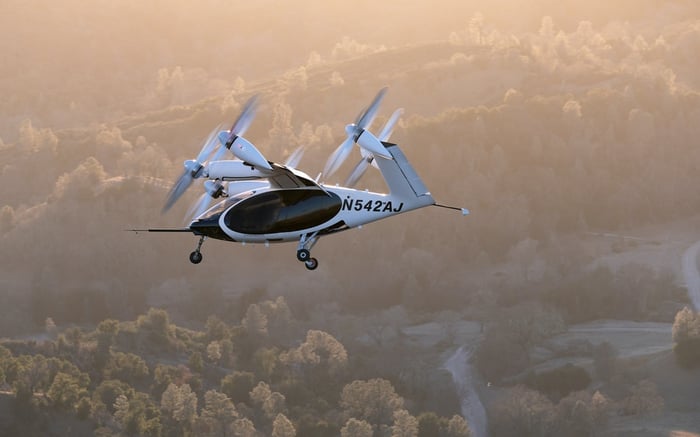 In fact, that's just about where Joby shares trade right now -- $10 a share, give or take a few pennies.

Where will its stock go from here? Over the long run, that will depend on how quickly the company can evolve from a story stock into a company that makes and sells actual, physical products to customers. At last report, the company had no revenue and minimal operational expenses -- but still managed to incur a $128 million loss over the past year due to "non-operating expenses."

The good news is that Joby says the SPAC merger has provided some $1.6 billion in cash with which to fund its shift from story to production. On its present course, that should give the company well over a decade in which to prove its worth.