The news that the Biden Administration would push for booster shots for COVID-19 vaccinations helps the biotech, which paired with Pfizer on a vaccine. 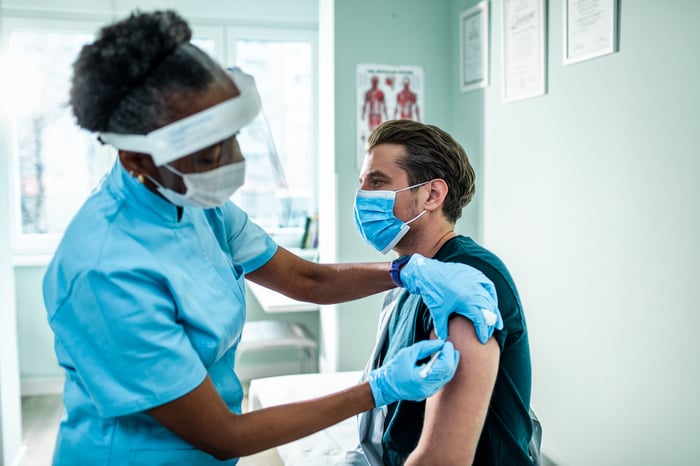 There are two factors helping to drive the stock's shares.

On Monday, the company and Pfizer released phase 1 data saying that its Pfizer-BioNtech COVID vaccine (BNT162b2), when given as a booster shot, appeared to be safe and effective in developing antibodies to fight the beta and delta variants, as well as the original COVID strain. It added that phase 3 data was expected soon. The shot was given to test subjects eight to nine months after they had received their second dose of the same vaccine. The phase 1 results showed that a third dose brought a higher rate of neutralizing antibodies against the regular strain of COVID-19 as well as against the beta and delta variants.

The other bit of good news is that the Biden administration will push for COVID booster shots. According to a New York Times article published Monday, the planned announcement will apply only to those who have had the Moderna or Pfizer vaccines.

Investors had cooled to what they might think is a too-high valuation for BioNTech, but the company's P/E ratio has fallen from above 600 to a reasonable 18.78.

Sales from its COVID vaccine have helped drive profits, but when the company's second-quarter numbers fell short of expectations, the stock dropped. Looking at the big picture, though, the company reported $6.4 billion in revenue, up 159% year over year, and net income of $3.6 billion, up 147.3% compared to the same period in 2020.

It's true that the company's near-term future is intertwined with the need for its vaccine, so there's plenty of risk, but it appears for now that the profits are likely to roll in for a while.