Please ensure Javascript is enabled for purposes of website accessibility
Log In Help Join The Motley Fool
Free Article Join Over 1 Million Premium Members And Get More In-Depth Stock Guidance and Research
By Jeff Little – Aug 17, 2021 at 7:49AM

Maybe the equivalent of an extra full quarter of revenue will get the attention of investors.

Healthcare has become a hot topic of discussion over the past 18 months, including conversations about COVID-19 and its delta variant, debates over vaccination, and dialogues about the innovation and advancement in technologies to bring us more automation.

Bioventus (BVS -3.59%) is a company that specializes in developing innovations in biologics and clinical therapies for active healing. It IPO'd this year and has plans to grow quickly, but will those plans make the company's stock a buy for investors? 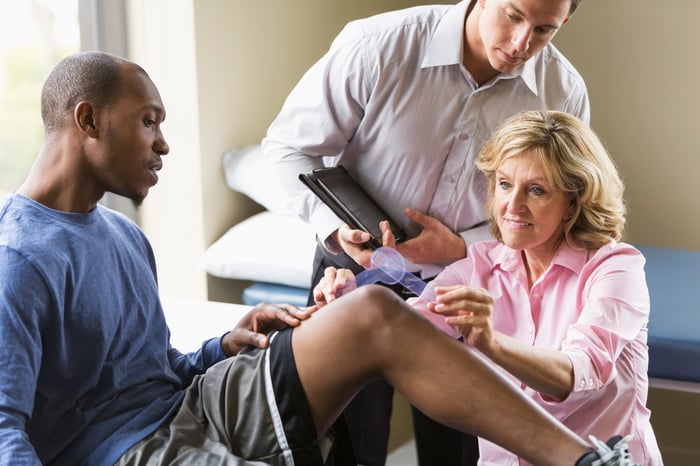 In February of this year, Bioventus opened its doors of ownership to the public by way of an IPO of 8 million shares. Originally anticipated to price in the range of $16 to $18, the company settled on $13, bringing in $104 million. But this is no new start-up making its way on its own; Bioventus was previously the biologics and clinical therapies unit of Smith & Nephew, a long-standing medical company based in the United Kingdom focusing on advanced surgical devices, wound management, and biologics and clinical therapies. Smith & Nephew spun off Bioventus in 2012.

A history of growth

Leading up to the spin-off, Smith & Nephew was experiencing strong growth from the biologics and clinical therapies unit, with annual revenue growing from $52 million in 2004 to $223 million in 2010 for that unit alone.

By 2019, full-year revenue for Bioventus had grown to $340 million, representing a 6.5% increase over 2018. But then came COVID-19, which struck pretty much the entire healthcare industry; as elective surgeries and office visits were canceled or postponed, the company experienced a setback in revenue to the tune of an 8.2% decrease through the first nine months of 2020 on a year-over-year basis.

Since the IPO, Bioventus has displayed a plan of growth through acquisition, looking to take advantage of what is a post-acquisition $15 billion total addressable market in hospitals, ambulatory surgical centers, and office care. In July, the company announced the acquisition of Misonix (MSON), a public company that focuses on ultrasonic medical devices used in the removal of hard and soft tissue; that acquisition will bring additional ultrasonic technologies as well as regenerative medicines to the portfolio of products for Bioventus.

The combined companies' portfolios will allow for expansion of capabilities by utilizing Bioventus' existing footprint for adoption of Misonix's product offerings, expanding a sales force across a larger customer base, and opening international doors for Misonix products by way of direct channels that Bioventus holds in Canada, Germany, the United Kingdom, and the Netherlands.

For a cost of $518 million in a cash-and-stock purchase, the company expects to see a near-term return on investment of $80 million of additional revenue for 2021 from sales of Misonix products by year's end. This is the equivalent of an extra full quarter of revenue based on Bioventus' current annual revenue total of $320 million.

Management also expects to see additional savings, anticipating that by the end of the second full year as a combined entity, it will have achieved $20 million in pre-tax cost savings thanks to overlapping synergies in the areas of public expense, support and systems, and infrastructure.

The acquisition of Misonix follows up a previous smaller acquisition of privately held Bioness. The Bioness acquisition was made just a month after Bioventus went public, and it gives the company a wholly owned subsidiary developer of devices and programs in the orthopedic space.

The company shelled out $45 million up front for Bioness, with the remaining $65 million tied to milestone achievements by Bioness, which include potential U.S. Food and Drug Administration (FDA) approval of a new implantable pulse generator and receiver, called TalisMann.   The additional milestone achievements also call for Medicare coverage, reimbursement, and a $55 million revenue target over the first three years of the product launch. In all, if Bioness meets the milestones agreed upon by the two companies, the total acquisition cost for Bioventus would be $110 million.

Bioventus' CEO Ken Reali has said he sees the purchase as complementary between his company and Bioness because it will bring immediate revenue to Bioventus through an expanded product offering, while allowing for an extended reach of Bioness offerings through Bioventus' existing resources.

Though it's a bit early to know how much the Misonix acquisition will contribute to 2021 sales because it has not fully closed yet, the company provided totals from the Bioness acquisition during its second-quarter (Q2) earnings call. Q2 2021 total net sales were up 89% year over year to $109 million -- an increase of $51 million. Sales from the Bioness acquisition accounted for $11.9 million of that total. Earnings per share also came in stronger than expected by analysts at $0.16, beating Wall Street's estimate by $0.01.

Management also raised full-year guidance for 2021, from an average of $402 million in total net sales to $410 million, an increase of 27.5% year over year; that's made up of roughly $377 million from legacy Bioventus sales plus $33 million from Bioness. That $33 million would make up 73% of the initial $45 million shelled out for Bioness (not tied to milestone achievements) in only the first nine months since the acquisition.

After reaching a high of just below $20 in June, Bioventus stock shares are currently priced at about $15, slightly above the IPO price set in February. The Bioness acquisition is expected to close sometime in the fourth quarter. Fourth-quarter results will shine a better light on whether that acquisition will pan out with near-term positive results.

In the meantime, analysts who follow the company have an average price target of $21 on Bioventus stock, providing investors with a possible 40% gain if that target price is hit. I wouldn't be surprised to see it come close to that number as the year goes on and the date gets closer to the closing of the Misonix acquisition.

Why Shares of Bioventus Fell 14% on Wednesday

Why Bioventus Stock Is Sinking Today
351%