This brings us to the mortgage real estate investment trusts (REITs), especially the leaders in the sector: Annaly Capital Management (NLY -0.41%) and AGNC Investment (AGNC -0.60%). 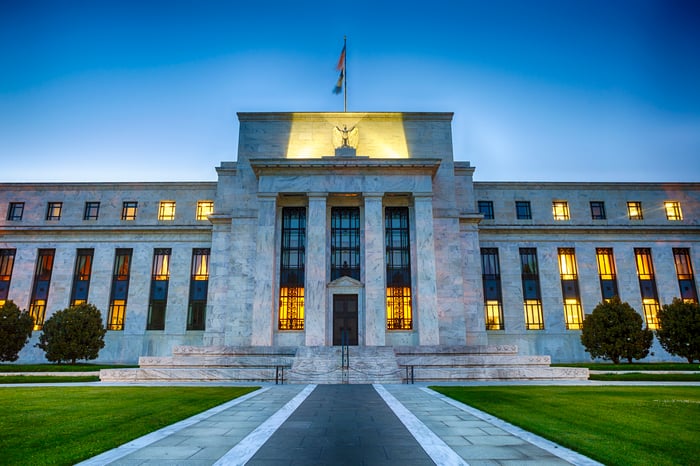 The Fed has a dual mandate, which is to manage inflation while maintaining maximum employment. This means that the Fed will try to hold down rates when the economy is struggling, and raise them during a recovery. In addition, the Fed has been purchasing Treasuries and mortgage-backed securities in the market, driving down longer-term interest rates and boosting the value of bonds and other fixed-income securities. While the Fed has been pretty direct in saying it is nowhere close to increasing interest rates, it is beginning to discuss when to stop or slow its purchases of Treasuries and mortgage-backed securities.

The Fed has been buying $40 billion of agency mortgage-backed securities a month since the early days of the pandemic. These securities are the same type that Annaly and AGNC Investment hold, and that buying activity helps boost the value of their portfolios.

A trip down memory lane to the "taper tantrum" of 2013

We do have a historical record of how mortgage REITs performed the last time the Fed contemplated reducing purchases, which was dubbed the "taper tantrum" of 2013. During 2013, the Fed hinted at cutting Treasury and MBS purchases and ended up announcing its first reduction at the December 2013 open market committee meeting, saying it was cutting its monthly purchases from $85 billion to $75 billion.

Take a look below at the chart of how Annaly and AGNC performed during 2013. While there was discussion of reducing purchases, the most direct hint came during former Fed Chair Ben Bernanke's Congressional testimony in May 2013: "If we see continued improvement and we have confidence that that's going to be sustained then we could in the next few meetings ... take a step down in our pace of purchases," Bernanke said. You can see how Annaly and AGNC reacted -- they were clobbered. 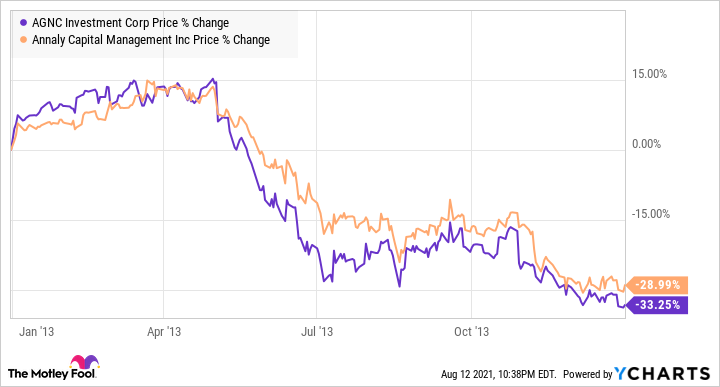 The Fed has acknowledged that it didn't handle things perfectly in 2013, and it wants to ensure that we don't see a repeat. While the Fed may indeed stick the landing and manage to extricate itself from the mortgage-backed securities market without causing too much disruption, a repeat of 2013 is certainly a possibility, and we have already begun to see widening spreads.

Both Annaly and AGNC reported declines in book value per share on their second-quarter earnings calls. Annaly is probably in a little bit better shape than AGNC because it has other investments that will be less sensitive to mortgage-backed security spreads. Both companies also have the institutional knowledge of that period, so presumably they will be better prepared this time around. The bottom line is that changes in Fed policy present a risk for mortgage REITs and investors should keep that in mind.

4 High-Yield Dividend Stocks to Stay Away From
376%