Declines of around 1% aren't a big deal, but they came in dramatic fashion.

The stock market remained relatively flat during much of the day on Wednesday. However, by the end of the day, the Dow Jones Industrial Average (^DJI 2.18%), S&P 500 (^GSPC 3.10%), and Nasdaq Composite (^IXIC) were all down around 1%. Much of the downward movement came in the final minutes of the trading day.

It's important not to throw around words like "crash" or "plunge" lightly, and moves this small don't deserve those terms. However, a drop of more than 300 points for the Dow in the span of 90 minutes and a 165-point decline in just the last 18 minutes of trading aren't necessarily everyday events. Below, we'll look at what was behind all the late-day volatility. 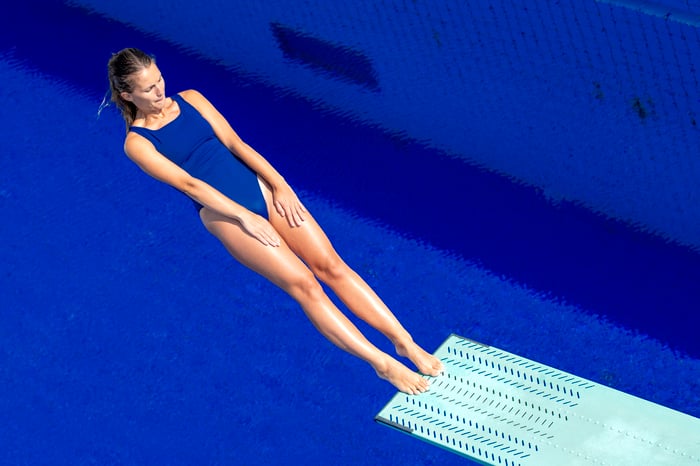 The latest from the Fed

Most of the movement in the stock market came after the Federal Reserve released the minutes from the July meeting of its Federal Open Market Committee (FOMC). This group makes decisions on monetary policy, most notably changes in targets for the federal funds rate and other key short-term interest rates.

The part of the minutes that drew the most attention was discussion of the Fed's quantitative easing asset purchase program. Committee members noted that employment levels have improved dramatically from their worst levels during the pandemic, and they tended to believe that rising levels of inflation that consumers have seen this year should prove to be transitory. However, significant movements in long-term Treasury bond yields led some committee members to conclude that market participants don't necessarily believe that price stability is a given.

Accordingly, most committee members seem to support the idea that the Fed should reduce its asset purchase activity sometime later this year. That's consistent with expectations in the market, with some seeing an announcement coming as early as September.

What does this have to do with stocks?

At first glance, interest rate decisions might seem to have little impact on stocks. However, many investors have looked to the bond market for guidance on the future direction of stock markets for quite a while.

The main concern policymakers and investors alike have is avoiding a repeat of the so-called "taper tantrum" of the early 2010s. At that time, when the Fed tried to unwind quantitative easing activity in the recovery from the financial crisis, it led to substantial volatility in the stock market. That's what's behind the Fed's much more gradual approach this time around, as it tries to provide plenty of advance warning to financial markets before moving forward with action.

Nevertheless, removing support from the bond market could still have an impact on stocks. Rising interest rates make bonds more attractive compared to stocks, and many investors who would have preferred fixed-income investments have instead chosen stocks because of the extremely low yields that bonds currently offer. At some point, yields will rise to high enough levels to prompt a shift in the other direction.

In addition, many companies have taken advantage of extremely low interest rates to borrow. If cheap financing comes to an end, it could have a disproportionate impact on stocks that have used leverage most effectively to date.

Be ready for whatever's next

The S&P 500 has effectively doubled since its March 2020 lows, and the Fed's assistance has played a key role in the recovery. It's only natural to expect some pullback as the central bank's accommodative programs start to ease up. That doesn't necessarily mean a correction or bear market is imminent, but it does provide some context in which to put the short-term movements of stocks.