Please ensure Javascript is enabled for purposes of website accessibility
Log In Help Join The Motley Fool
Free Article Join Over 1 Million Premium Members And Get More In-Depth Stock Guidance and Research
By Billy Duberstein – Aug 19, 2021 at 7:52AM

Trulieve CEO Kim Rivers had quite a week, but capped it off by buying more of her company's beaten-down shares.

Despite recording extremely strong growth in sales and profits this earnings season, U.S. cannabis stocks have still languished over the past six months or so. After a big run up in January and February, it appears "hot money" has grown impatient with the slow pace of federal deregulation, which has been expected since last November.

Leading U.S. cannabis multi-state operator Trulieve Cannabis (TCNNF -0.23%) was one of those U.S. pot stocks reporting strong Q2 earnings results. However, issues outside of the company regarding the husband of CEO Kim Rivers led to a bad sell-off, with some fearing the company could get caught up in scandal.

Yet amid the fear-driven sell-off, Rivers increased her own personal bet on the company, by picking up a significant number of Trulieve's discounted shares. 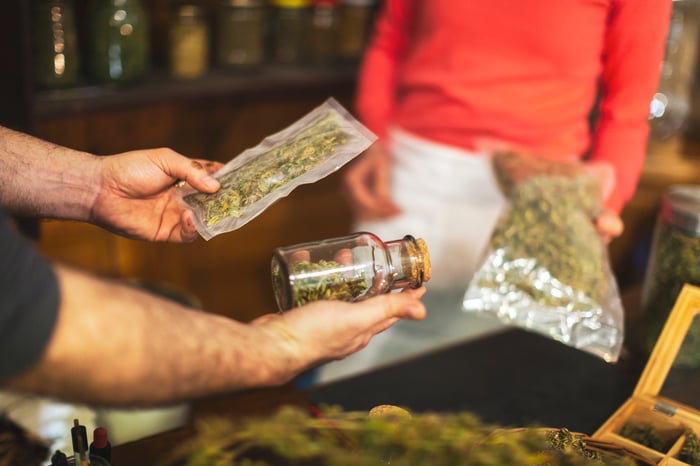 In the second quarter, Trulieve reported 78% revenue growth, beating analyst expectations, while recording net income of $40.9 million, more than double that of the year-ago quarter. Importantly, the company also secured a medical cannabis license in Georgia, the company's seventh state. Georgia is a populous state, and since it's directly adjacent to Trulieve's home state and biggest market of Florida, it could be easily serviceable with the company's current infrastructure. Therefore, Georgia could be another high-profit opportunity for the company, especially if the ban on interstate commerce comes down.

Yet while Trulieve delivered solid results, the stock took a tumble the next day for a whole different reason.

On Friday, Aug. 13, the day after Trulieve reported earnings, Rivers' husband, John Burnette, was convicted on multiple public corruption charges, which could result in up to 20 years in prison. Burnette is a leading businessman and real estate developer in Florida and is not directly connected with Trulieve. His conviction had to do with charges related to his real estate ventures; however, news of his conviction sent Trulieve shares tumbling shortly thereafter.

After the ruling, Trulieve's board of directors released a statement on Twitter:

We have consistently maintained that neither Trulieve nor our CEO are involved in the case. The Board continues its strong support of Kim Rivers, its Chairman, Chief Executive Officer, and President, and the strategic vision for the company that Kim has designed in concert with the board.

A personal thank you to everyone who has reached out to me over the last 24 hours. I have never been more confident in the future of Trulieve nor more proud of what we have built over the past 5 years. I look forward to the future and am grateful for your support. Onward!

Investors may have been concerned that although Trulieve wasn't on trial, testimony showed Burnette had boasted to undercover FBI agents that he worked with a state legislator to develop rules making it more difficult to issue cannabis permits to potential Trulieve rivals back in 2014. Trulieve received one of the first five permits in the state, and today dominates Florida with about 50% market share. Additionally, Trulieve has employed a construction company, of which Burnette is a minority shareholder, to build out its retail and grow facilities.

Although the verdict is concerning, it's difficult to see how the Burnette case could lead to an adverse outcome for Trulieve. It would be hard to penalize a company for having a related party discuss emerging state cannabis rules with a politician, especially so far in the past, when the Florida cannabis industry hadn't even really been formed yet. Trulieve now has 85 dispensaries in Florida and 91 nationwide, and employs thousands of people in Florida and elsewhere.

Nevertheless, there's probably a non-zero chance something could happen.

Against this negative backdrop and falling stock price, Rivers showed her confidence in the future of the company by purchasing another 3,509 shares on Tuesday, Aug. 17, amounting to about $100,000. That's not a tremendous amount for a CEO to buy, but it is not insignificant. For his part, CFO Alex D'Amico bought 660 shares for $17,820 that same day.

Rivers' buy increased her stake by about 4.5%. Interestingly, back on June 15, Rivers made a massive $1 million insider purchase, increasing her Trulieve stake by about 60%, at prices about 25% above where shares traded earlier this week. So it didn't appear Rivers was particularly worried about the outcome of the trial. Given that Trulieve was about 33% off all-time highs in June and nearly 48% below all-time highs today, it seems Rivers thinks shares are very, very cheap -- cheap enough to purchase a significant amount of stock over the past two months.

No U.S. cannabis stock is without risk, given the legal ambiguity under which they operate; however, all of the U.S. MSOs that have reported results this earnings season have continued the trend of strong growth displayed over the past two years. Research firm Cantor Fitzgerald recently announced it expects U.S. legal cannabis sales to double by 2023, and Jeffries recently called the U.S. cannabis space a generational wealth opportunity.

Given the potential upside and the recent sell-off in the shares, risk-tolerant investors may want to think about buying this dip in U.S. cannabis. You'll at least have the CEO of one of the country's largest MSOs on your side.

Can Trulieve Recover From the Harvest Deal?
351%