The decline for many cannabis stocks over the past three months has exposed a couple of bargain opportunities with good financial momentum.

In the past three months, cannabis stocks have swooned in general. The AdvisorShares Pure Cannabis ETF is down more than 6% in that time, and plenty of individual cannabis companies have lost a lot more.

Among those are Columbia Care (CCHWF 5.71%), Hydrofarm Holdings (HYFM 7.80%), and Scotts Miracle-Gro (SMG 0.94%), all of which are down 18% or more in the past three months despite what I see as positive financial trends that make them bargain stocks at the moment. 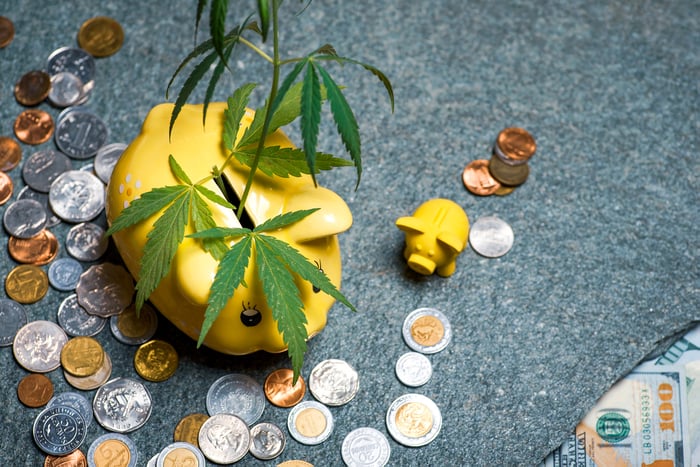 Columbia Care is an overlooked MSO

Columbia Care's shares are down more than 26% in the past three months. The company is one of the larger multi-state operators around; it has 96 dispensaries (both operating and in development) and licenses in 18 U.S. jurisdictions and the EU. It also has 31 cultivation and manufacturing facilities, all in the U.S., including five in Colorado.

The company is in the process of buying Denver-based Medicine Man Technologies, and the addition of that company's four retail outlets will make Columbia Care the largest cannabis operator in Colorado -- the state with the second highest U.S. total marijuana sales -- with 26 stores.

In its second-quarter report released last week, Columbia Care reported revenue of $109.7 million, up 232% year over year and 19% sequentially. It also saw record adjusted earnings before interest, taxes, depreciation, and amortization (EBITDA) of $16.4 million, an improvement of $21.1 million over the same period in 2020 and 58% sequentially.

The states in which Columbia Care is seeing the most revenue are California, Colorado, Massachusetts, Ohio, and Pennsylvania, though it also experienced a revenue jump of 48% in Florida, sequentially, thanks to increased flower production and new product launches.

Scotts Miracle-Gro's shares are down more than 31% over the past three months, even though it is coming off a strong third quarter.

Through its subsidiary, the Hawthorne Gardening Company, the company is a leading provider of lighting, supplements, nutrients, hydroponic equipment, and everything else needed to grow marijuana.

Hawthorne's growth has helped drive the company's overall revenue. In the third quarter, Scotts' sales were up a reported 8% year over year, led by Hawthorne's rise of 48%. The company also purchased HydroLogic Purification Systems -- which makes products, accessories, and systems for water filtration and purification -- for $65 million. It will be part of the Hawthorne segment and is expected to add $20 million in annual sales, the company said.

Really, the main concern at this point is that the rest of the company isn't keeping up with Hawthorne's growth. But that's to be expected, given the ever-increasing need for equipment to grow cannabis both commercially and at the home as more states relax marijuana laws. 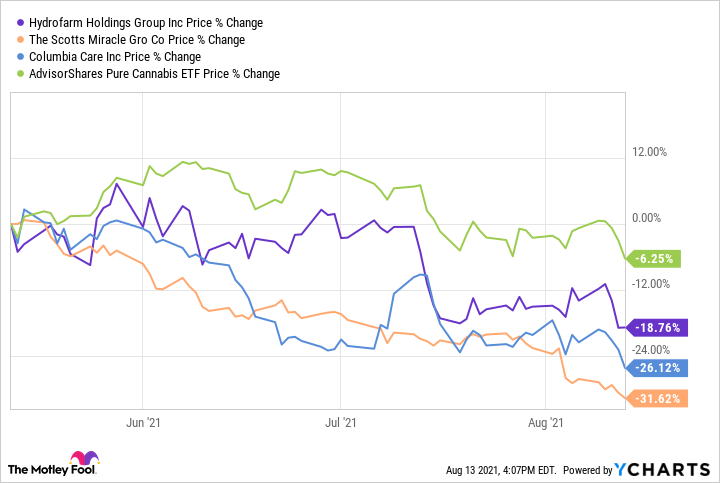 Hydrofarm's shares are down more than 18% over the past three months. The company specializes in controlled-environment agriculture equipment for all kinds of crops, but its products are particularly useful for growing cannabis. The company, founded in 1977, sells high-intensity grow lights, climate control solutions, and growing media, such as specialized soil or nutrients.  It went public in December and has had four consecutive quarters of 60% or more organic sales growth.

In its second-quarter report last week, the company said quarterly revenue reached a record of $133.8 million, up 47% year over year. Hydrofarm also listed net income of $2.3 million, up 21% over the same period in 2020. And it reported adjusted EBITDA of $16.2 million, up from $7.1 million year over year.

The company only sells wholesale, so it doesn't compete directly with Scotts in the retail sector. It has been aggressive in buying up competitors, spending $83 million earlier this month to buy plant-nutrient maker Greenstar Plant Products. Last month, it bought three companies from one Oregon-based hydroponics products manufacturer and supplier: Aurora Innovations, Aurora International, and Gotham Properties. It also purchased nutrient brands HEAVY 16, House & Garden, and Mad Farmer. With the additions, the company said it expects 2021 annual sales to reach 45% to 50% higher than 2020.

I don't think any of these choices is a bad one. To me, they're all basically underpriced due to overarching market sentiment regarding cannabis stocks, and they're all likely to go higher based on their financials.

I think Scotts is the best buy of the three based on its low forward price-to-earnings ratio of 16.91, the diversity of its business, and the phenomenal growth of Hawthorne. Most cannabis companies aren't profitable yet, but even the ones that are, such as Trulieve Cannabis or Innovative Industrial Properties, a real estate investment trust that caters to cannabis companies, have higher P/Es at roughly 45 or 19 times earnings, respectively.

I also like Columbia Care; it offers the most upside of the three, along with slightly more risk. The number of cannabis retailers keeps growing, but eventually there will be a shakeout, and the large multistate operators such as Columbia Care should be the beneficiaries when that happens.

Hydrofarms is another solid choice based on its growth, but because it's the smallest company of the three, I'd rather wait this one out to see the impact of its recent acquisitions.