Monday.com, Marqeta, and Global-e are riding a huge wave of digital change.

The effects of the pandemic continue to accelerate the expansion of the digital economy. Growth trends in sectors like cloud computing, e-commerce, and financial technology are showing no signs of slowing anytime soon and also happen to be transforming daily life. This transformation has created or contributed to establishing several massive new businesses over the last decade, but there are plenty of small new businesses with promising futures too.

Three such businesses to put on your radar, especially after seeing their second-quarter 2021 earnings results, are Monday.com (MNDY 1.18%), Marqeta (MQ 1.35%), and Global-e (GLBE -2.46%). Let's find out a bit more about these three under-the-radar tech stocks. 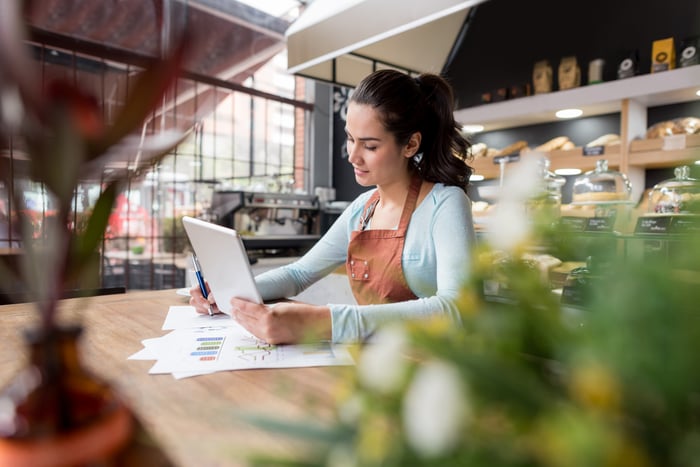 Monday.com can be classified as a cloud-based project and workflow management software offering, but it's so much more than that. Its subscription service -- billed as Work OS (operating system) -- is a low-code software development platform that makes it easy for those with little to no coding background to build their own applications.

The inherent flexibility of its offering to customize workplace tools for whatever an organization or business team needs is winning over lots of fans -- both large and small. Both Salesforce.com and Zoom Video Communications made sizable investments in the IPO in early June. Then during its Q2 earnings update, Monday.com said customers spending at least $50,000 per year increased to 470, compared to only 144 the year prior. And to build on its momentum, a new free-to-use tier with a two-user limit was added during the spring months to get smaller businesses to try out the platform.

As a result, Q2 revenue was up 94% year over year to $70.6 million, an acceleration from the 85% pace set during the first quarter. A full-year 2021 revenue outlook was provided too, with management calling for at least 74% growth over 2020 to $280 million to $282 million. Not bad at all for this workflow management software niche.

Share prices of Monday.com have exploded higher since the IPO on the news, nearly doubling since June and currently valuing the company at a market cap of $15.4 billion. Clearly, with Monday.com hauling in just a small fraction of that valuation in annual sales and just starting to turn the corner on positive free cash flow, shareholders are incredibly optimistic about this upstart's long-term prospects.

But with project management software leader Atlassian (market cap of over $84 billion) providing a preview of what could be in store in a few years down the road, and with Monday.com's $875 million in cash and equivalents creating a massive war chest to promote expansion, the optimism isn't misplaced.

2. Marqeta: The back-end tech behind lots of fintech services

For any shareholder with a substantial amount of investable net worth in fintech leaders like Square, Marqeta is an intriguing story. The cloud software company is the behind-the-scenes player that powers all sorts of virtual banking, online lending, and payments services. For example, when consumers open a buy now, pay later (BNPL) account (like at Afterpay, which is being acquired by Square), a virtual credit card is issued. Marqeta's technology is responsible for that type of modern credit issuance.

The company counts a number of fintech businesses as customers (including Square and BNPL peer Affirm) as well as banking industry incumbents like JPMorgan Chase. Even Alphabet's growing Google Pay will make use of Marqeta for its new virtual wallet payment options. A boom in e-commerce and digitized financial management in the last year and a half has been great for Marqeta. During Q2 2021, the company reported a 76% increase in net revenue to $122 million, led by the BNPL movement as younger consumers look for more modern credit solutions to complete their purchases.

Marqeta stock has not fared so well thus far since its June IPO. Shares are down 20% so far. One reason could be an implied sequential drop in results based on the company's Q3 2021 outlook for revenue to be $114 million to $119 million (or 38% year-over-year growth according to management on the earnings call). After all, even after its tumble out the gate, Marqeta carries a market cap of over $13 billion (about 28 times full-year sales using the annualized Q2 revenue run rate). That's a premium price to be sure, although Marqeta did generate positive free cash flow of $4.7 million through the first half of 2021 even though it's still a small industry player.

I wouldn't bet against Marqeta long-term, though. This technology company is enabling all sorts of new financial products and services, and disruption of the status quo in the banking and finance industries is only just getting underway. Plus, of the $1.78 billion in total assets Marqeta reported having as of the end of June, $1.68 billion of that was cash and equivalents -- most of it raised during its IPO. This is an incredibly efficient business model with tons of options before it. Make sure to keep tabs on Marqeta going forward.

E-commerce software outfit Global-e has been one of the hottest IPO stocks so far this year. Share prices of the tiny company are up more than 170% since they made their debut in May. A partnership and integration with digital commerce software giant Shopify -- which itself is helping Facebook build its social commerce platform -- helped send investor sentiment on Global-e into the stratosphere.

It's not hard to see what all the hype is about. Global-e's services cater to merchants wanting to sell in international markets. Capabilities include website translation into local language, tax calculators, local shipping service integration, and more. Cross-border commerce is big business worth tens of billions in spending every year. On track for gross merchandise value to be less than $1.4 billion this year, Global-e is a very small player in this large and expanding sandbox.

It's putting down roots in this arena at a rapid pace, though. According to its Q2 earnings report (Global-e's second as a public concern), revenue increased 92% from the year prior to $57.3 million. It turned free cash flow positive in the quarter as well, generating $6.8 million in profitability by that metric. That's pretty good for a company prioritizing growth with a high rate of sales and marketing expenses right at the moment.

The huge quarter prompted an upgrade in full-year revenue outlook, now expected to be in a range of $227 million to $231 million (some $18 million more than the previous guidance). If price tags are your primary concern, that's an issue. Global-e is valued at nearly 44 times expected sales this year after the massive run-up in stock price. Nevertheless, like the other up-and-comers on this list, an ample cash reserve of $469 million and no debt provides another reason for bullishness on this company's long-term prospects. At the very least, keep an eye on this under-the-radar but fast-moving e-commerce technologist.

Is This Little-Known Company the Next E-Commerce Powerhouse?

1 Monster Growth Stock that Could Soar 52%, According to Wall Street

Disney Brings the Magic to This High-Growth Stock

Missed Out on the FAANG Stocks? Buy the GHOST Stocks Instead
376%