A strong market helped Wall Street finish off the week on a happy note.

Stocks have been under pressure for much of the week, but Friday brought a silver lining to those who've had to endure declines over the past several days. Some encouraging earnings reports and a generally more upbeat view of the prospects for the U.S. economy in long run helped push the Dow Jones Industrial Average (^DJI 0.10%), S&P 500 (^GSPC -0.12%), and Nasdaq Composite (^IXIC -0.18%) to solid gains for the day.

Technology stocks have been instrumental in the bull market that followed the coronavirus bear market almost 18 months ago. Today, a couple of tech stocks stood out from the crowd, with Nvidia (NVDA -1.51%) posting big gains while Snowflake (SNOW -2.79%) fell. We'll give more details about what sent these companies' share prices in different directions.

Nvidia keeps on chipping away

Shares of Nvidia were up more than 5% on Friday, adding to gains from earlier in the week. As often happens, it took Wall Street analysts some time to jump in with their positive views after a strong earnings report.

Nvidia had initially risen after releasing impressive second-quarter financial results. Revenue was up 68% from year-earlier levels, with particularly strong 85% sales gains for its video gaming chip segment. The company also expressed high hopes for its future, with third-quarter sales gains projected at 44% year over year. 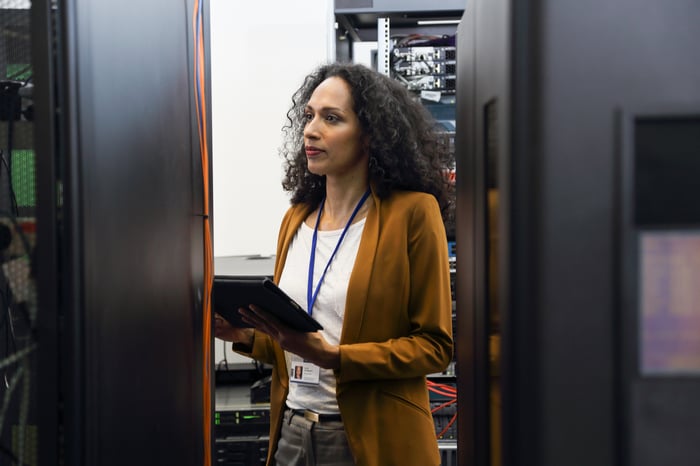 Friday's gains stemmed from positive comments from analysts at Benchmark Capital, who initiated coverage of the semiconductor with a buy rating. Benchmark also set a $230 per share price target, implying another 10% or so of upside potential even after today's latest gains for the stock. Analysts see Nvidia as being well-positioned to keep taking advantage of favorable trends like digital transformation.

That said, the future isn't entirely clear for Nvidia, as regulators in the U.K. raised more questions about its proposed acquisition of CPU designer Arm. Yet despite the potential for longer delays, Nvidia investors seem confident that a deal will eventually go through, and that could make a huge difference in Nvidia's long-term strategy.

On the other hand, Snowflake's shares were down nearly 5%. There was some discord in opinion about the cloud data specialist's prospects, and naysayers seemed to take the upper hand.

Negative comments about the company got attributed to Cleveland Research, with a report suggesting that competition from larger tech players might be eating into Snowflake's growth. Alphabet (GOOGL -0.55%) (GOOG -0.44%) was one potential culprit, and given the stock's high valuation, any slowdown in growth could have outsized impacts on the stock price.

Nevertheless, Snowflake got some support from another set of analysts. Piper Sandler retorted that even a growth slowdown wouldn't necessarily translate into troublingly slow growth rates, given Snowflake's excessively strong revenue gains over the past year. Plenty of high-growth companies go through uncertainties like this, and inevitable declines in percentage gains as total revenue grows don't always signal an end to the best times for a stock.

Snowflake has drawn controversy since it went public, gaining an extremely high valuation but having thus far put up the numbers to justify it. The budding tech giant could indeed face growing pains ahead, but others will see today's decline as a bargain opportunity for investors.