Please ensure Javascript is enabled for purposes of website accessibility
Log In Help Join The Motley Fool
Free Article Join Over 1 Million Premium Members And Get More In-Depth Stock Guidance and Research
By Prosper Junior Bakiny – Aug 21, 2021 at 10:00AM

Don't count this rising biotech out just yet.

Investors looking for exposure to the coronavirus vaccine market may naturally gravitate toward the two leaders in this segment, Moderna and Pfizer. However, many other companies are looking to grind out a piece of this vast market. One of those is biotech Novavax (NVAX 0.24%), a company whose shares are up by an impressive 5,630% since January 2020. Meanwhile, the S&P 500 is up a comparatively meager 38% over the same period.

Despite this amazing performance, Novavax has yet to market its potential COVID-19 vaccine, NVX-CoV2373. And as a clinical-stage biotech, it doesn't have any other products on the market. Some might feel that its perceived success in this space is already baked into its stock price. Is it? Let's look at where the company's coronavirus program stands and determine if the stock is still a good buy despite its high price. 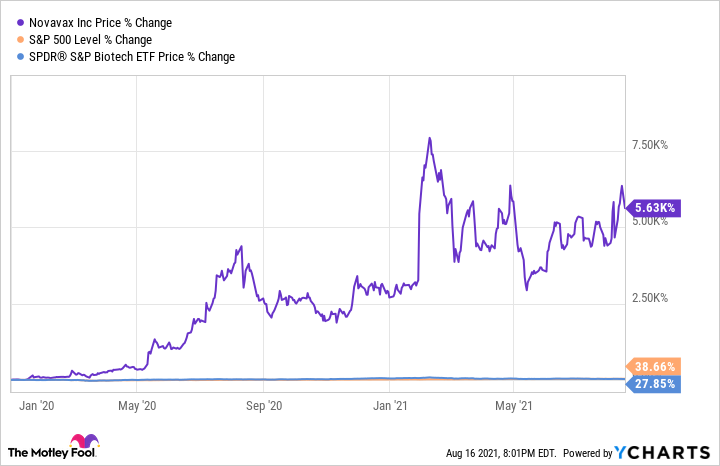 Novavax's COVID-19 shot in the pipeline seems highly effective at preventing the disease. Back in mid-June, the company announced the results of a phase 3 clinical trial conducted in the U.S. and Mexico that enrolled 29,960 participants aged 18 years or older. The vaccine showed 100% efficacy against moderate and severe cases of the disease, and its overall efficacy was 90.4%. The vaccine even proved potent against variants of concern, including the rapidly spreading delta type.

Novavax's vaccine -- which is administered in two doses given three weeks apart -- contains a harmless piece of the SARS-CoV-2 virus that causes COVID-19, namely the spike protein. Once a patient's immune system encounters it, it creates antibodies against the virus. This confers protection against future encounters with the virus.

However, the company has yet to submit its vaccine for regulatory review in the U.S. Should investors be worried? I think the answer is both yes and no. 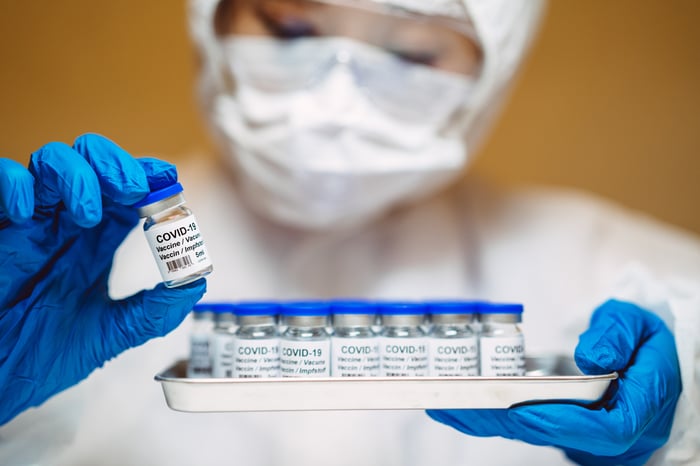 The most worrisome part of these developments is that Novavax's management keeps pushing back the timeline for a regulatory submission in the U.S. In the press release announcing its financial results for the first quarter ended March 30, the company said it would file for authorization in the U.S. and Europe in the third quarter. However, in its latest update for the quarter ended June 30, management now expects to file in the fourth quarter (between October and December).

Despite these delays, there may be light at the end of the tunnel. Novavax has already filed for authorization for the vaccine in the European Union, India, Indonesia, and the Philippines. Furthermore, the company has signed several advance purchase agreements (APAs) for its potential vaccine. These include a deal for 100 million doses with the European Medicines Agency -- and an option for an additional 100 million doses through 2023.

The company also has a deal for 1.1 billion doses with Gavi, the Vaccine Alliance, an organization whose goal is to increase access to immunization worldwide, particularly in less developed countries. Novavax also has agreements with the governments of Canada and the U.K. As of June 30, the biotech had $2.1 billion in cash and equivalents, due in large part to the $1.1 billion in payments for APAs it has already received.

This indicates the confidence that various third parties place in its potential vaccine, which is great news for Novavax and its shareholders.

Despite skyrocketing more than 5,000% since early last year, Novavax's market cap is still just $17 billion. By comparison, Moderna sports a market cap of $162 billion -- or more than nine times that of Novavax. Of course, Moderna expects to generate some $20 billion in sales from its COVID-19 vaccine this year, and the company has a pipeline full of promising mRNA-based vaccines for various infectious diseases. Still, the distance between these two vaccine makers is striking.

In my view, the market hasn't fully captured Novavax's potential in the coronavirus vaccine market. In other words, the company likely hasn't peaked. That's not considering its other opportunities, including NanoFlu, a potential vaccine for adults aged 65 and older. In a phase 3 clinical trial, NanoFlu compared favorably with Fluzone, a leading flu vaccine that is marketed by Sanofi. NanoFlu demonstrated a greater antibody response in the trial and showed a favorable safety profile as well.

Novavax first announced these results in March 2020, and the company has yet to file for regulatory approval for this candidate. However, the flu continues to take its toll, particularly among the elderly. Patients aged 65 and above make up most annual hospitalizations and deaths from the flu every year, according to the U.S. Centers for Disease Control and Prevention.

That's why the U.S. Food and Drug Administration granted NanoFlu the Fast Track designation, which helps speed up the review process for a vaccine (or drug) that addresses an unmet need. Novavax is also looking to develop a combo vaccine for the flu and COVID-19. Thanks to these opportunities, Novavax's overall prospects still seem to have significant upside left. And while it could be a bumpy ride for the biotech, I believe Novavax will handily beat the market over the next five years or so.