Sea Limited is growing like wildfire, and three secular trends are adding fuel to the inferno.

Since August of 2018, the S&P 500 has surged 55%, meaning investors have seen a windfall of roughly 15% per year. Even so, that performance pales in comparison to that of Sea Limited (SE 0.38%), an international holding company that operates in Southeast Asia. Over the same period, this stock has skyrocketed 2,250%, growing at a mind-boggling 186% per year.

After that massive run, it's natural to wonder how much higher Sea can rise. But I think this stock still has market-beating potential. Here's why. 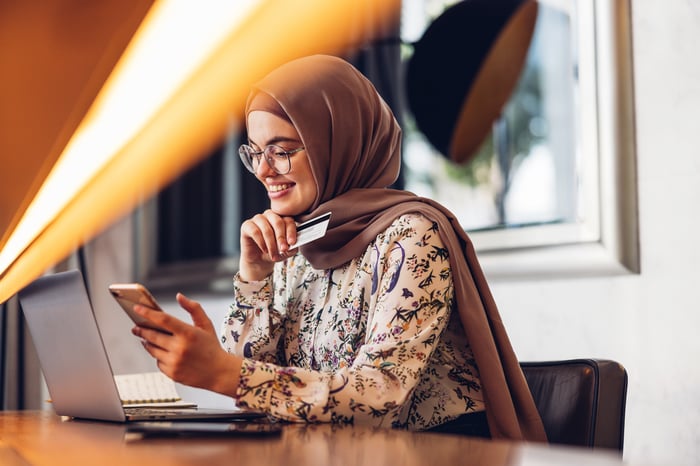 Sea Limited operates across seven countries in Southeast Asia and Taiwan, an area with one of the fastest-growing economies in the world. More specifically, Sea is a holding company that owns three distinct businesses, each of which hits on a major secular trend. Let's take a look at all three.

Shopee is the leading e-commerce platform in Southeast Asia, receiving twice as many monthly visits as the next closest competitor, Alibaba's Lazada. Last year the COVID-19 pandemic supercharged the adoption of online shopping, and that momentum has carried into 2021. During the most recent quarter, Shopee's gross merchandise value (GMV) surged 88% year over year to $15 billion.

SeaMoney is a fintech platform that offers payment processing, financing, and mobile wallet services. It was originally designed to supplement Shopee, but its use cases have expanded to other online and offline merchants, driving rapid growth in total payment volume (TPV). In fact, TPV skyrocketed nearly 150% to $4.1 billion during the most recent quarter.

Garena is a video game developer best known for Free Fire, a battle royale game for Android and iPhone. Notably, Free Fire is the highest-grossing mobile game in Southeast Asia, Latin America, and India. More importantly, while Sea's other businesses operate at a loss, Garena is profitable. In fact, its operating margin has expanded from 15% in 2018 to 58% in the most recent quarter.

In general, Sea Limited's top-line trajectory has benefited from the digitization of commerce and payments, as well as the rise of esports and mobile gaming. But Garena's profitability has also been a powerful growth driver.

Specifically, excess cash flow from Garena has allowed the company to invest aggressively in Shopee and SeaMoney. And those investments -- think hiring, marketing, tech development, and logistics services -- have supercharged the company's financial performance.

Looking forward, Sea Limited is well positioned to maintain that momentum. The population of Southeast Asia currently sits at 583 million, but only 69% of people have internet access. As that figure continues to climb, Sea Limited should see strong demand for its digital services.

In fact, according to research from Alphabet's Google, total GMV in Southeast Asia is expected to grow at 25% per year, reaching $300 billion by 2025. That should be a significant tailwind for Shopee and SeaMoney.

Here's the big picture: In Southeast Asia, Sea Limited is the clear leader in e-commerce, mobile gaming, and digital payments, three secular trends that comprise a market worth $116 billion, according to management. And as those trends continue to gain traction, Sea Limited should continue to grow like wildfire.

That's why I think this stock could triple over the next five years.