The networking and productivity platform for doctors is riding a wave of positive investor sentiment.

Shares of Doximity (DOCS 1.39%) traded higher on Monday, climbing as high as 14.8% on growing enthusiasm from investors, though the stock ended the trading session up 14%. The cloud-based service for doctors and other healthcare professionals climbed on no specific news, but has been riding a wave of positive sentiment that began with its first financial report as a public company. All told, the stock has gained more than 60% since its earnings release on Aug. 10. 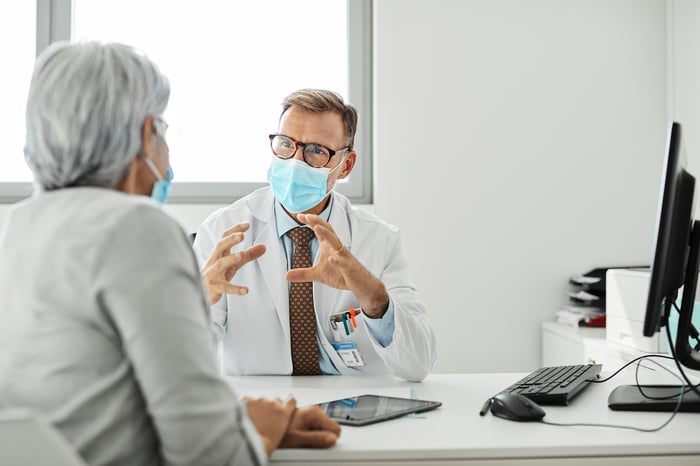 Doximity also got a boost as the result of positive comments made by CNBC's Jim Cramer. The television personality and former hedge fund manager said investors "definitely" should buy shares of Doximity, calling it "a star" and "the best of the best."

"Their EBITDA [earnings before interest, taxes, depreciation, and amortization] margin came in at 43%," Cramer added. "Analysts were only looking for 30%. That's extraordinary."

Investors are also celebrating Doximity's robust guidance for its fiscal Q2 and the full year. The company forecast revenue of $73.5 million at the midpoint of its guidance, sailing past analysts' consensus estimates of $71.8 million. Additionally, for the 2022 fiscal year, Doximity is guiding for revenue between $296.5 million and $299.5 million, ahead of analysts' expectations of $295.5 million.

The company's accelerating revenue, growing profits, and positive analyst commentary have investors psyched about its prospects.

Can Doximity Stock Keep On Climbing?
351%