Can it keep up the pace of growth?

At this point, everyone knows there are a lot of stocks trading at a premium valuation. And not all of them will be able to keep it up. It's why investors get nervous when they see the Nasdaq Composite Index trading for a price-to-sales (P/S) ratio double what it was when the market peaked in 2007.

But just because a stock is expensive doesn't mean it isn't justified. Take Snowflake (SNOW 0.81%), for instance. It trades at almost 100 times sales. The company's cloud-native data platform allows customers to consolidate their data into a single source, dumping the inefficiencies associated with traditional silos. And customers can't get enough. As it prepares to report its fiscal second-quarter earnings this week, here are three things I'm eager to find out. 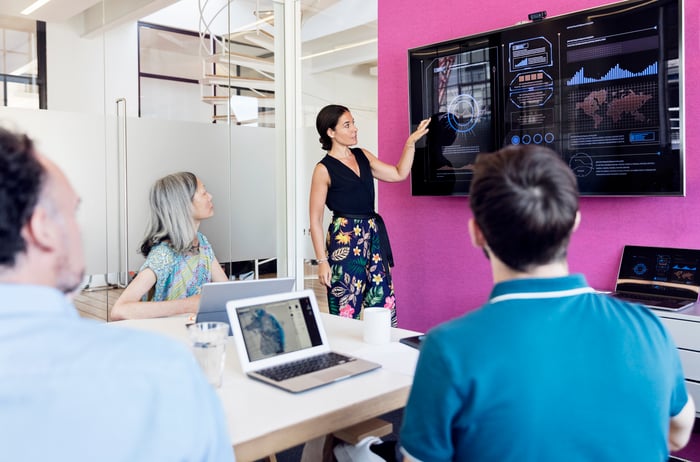 1. Can growth keep up with expectations?

CEO Frank Slootman is no stranger to success. He has previously taken two companies public. The first was Data Domain, where he served as CEO for six years before being bought by EMC. The second -- and more publicized -- was ServiceNow. He delivered 273% gains to those shareholders during his six-year tenure after it went public.

Snowflake was valued at $4 billion when he took over in April 2019 and currently sports a market cap of $82 billion. That's due to a combination of the stock market's love affair with fast-growing cloud companies and its own incredible performance.

Snowflake has the growth in spades. It put up better than 100% year-over-year growth in each of the three quarters it has reported. To top it off, remaining performance obligations -- the amount of contracted revenue yet to be recognized -- has increased faster. That means in addition to current revenue growing, the backlog of future revenue is expanding even more.

Management has guided for between 88% and 92% revenue growth for the upcoming quarter and 84% to 87% for the full year. Even at the high end, that implies year-over-year growth of 81% and 64% in the third and fourth quarter respectively. It's impressive growth, but Wall Street will be quick to factor in the deceleration.

Slootman likely needs to beat the high end of his guidance and adjust the full-year numbers to keep Wall Street sanguine. In the first quarter, he did just that, posting almost $214 million in revenue after guiding for between $195 million and $200 million.

For stocks like Snowflake, those phenomenal results quickly turn into expectations. I'm eager to see if the company can post a similar surprise this quarter. Especially after a research note last week cited increasing competition from Alphabet's (GOOG -2.56%) (GOOGL -2.51%) BigQuery cloud data warehouse.

2. Do the underlying metrics indicate more to come?

Similar to revenue and RPO, the metrics that foretell that top line growth have been astounding. Snowflake's ability to delight customers and derive more and more dollars from each of them, while adding new ones, has been something to behold. It's a growth engine with serious momentum.

Another way to see this is the number of customers that have spent more than $1 million in the past 12 months. Like all of Snowflake's other numbers, performance is awesome. These metrics show just how strong the overall momentum is in the business.

3. Can the company control spending?

Ultimately, all of that growth needs to translate into cash flow. A company with an unsound business model might still be able to pump enough money into sales and marketing to grow the top line. At least as long as investors are willing to keep buying newly issued shares. But eventually that willingness fades. Snowflake still needs to prove it can do this consistently. But it's getting there.

The company generated $21.9 million in operating cash flow last quarter. That was a good sign after its operations consumed cash in each of the prior three years. In fact, it consumed a slightly higher percentage of revenue in fiscal 2021 than it did in fiscal 2020. That was driven by exceptionally high sales and marketing expenses.

The spending makes sense as Snowflake tries to expand its offering to as large a customer base as possible. Once a customer signs up for its service, it's likely to maintain the relationship for years, if not decades. I'll still want to see if Slootman can get that spending under control as the company grows larger. If Snowflake keeps growing like it has been, it should take care of itself. In the meantime, it's really the only thing to worry about.