Please ensure Javascript is enabled for purposes of website accessibility
Log In Help Join The Motley Fool
Free Article Join Over 1 Million Premium Members And Get More In-Depth Stock Guidance and Research
By Rhian Hunt – Aug 24, 2021 at 7:15AM

The golf shoe and equipment company appears to be on the fairway to ongoing profits.

Avoiding the metaphorical sand traps of the COVID-19 lockdown economy, the golf sector has seen soaring consumer interest and equipment sales -- an opportunity Acushnet Holdings (GOLF -1.14%) has seized with both hands. The maker and seller of "performance-driven golf products" including shoes, clothing, clubs, golf balls, and other equipment recently posted its second-quarter results, outstripping not only last year but 2019, too. While it faces a few problems related to supply chains and other matters, there are at least four reasons it could continue to grow over the coming quarters.

The growth shown in Q2 2021 doesn't just surpass the pandemic-cratered results of Q2 2020 by 108.3%, but it also beats pre-pandemic Q2 2019 by 35.2%. This is a key point because it shows the growth is strong and long-term rather than just a rebound from last year's deep lows. Adjusted earnings before interest, taxes, depreciation, and amortization, or EBITDA, rose 68.8% from 2019 and 286.1% from 2020, while net income also grew solidly. All of this was achieved efficiently, with quarterly capital expenditure, or capex, rising from $10 million in 2020 to just $12 million this year. 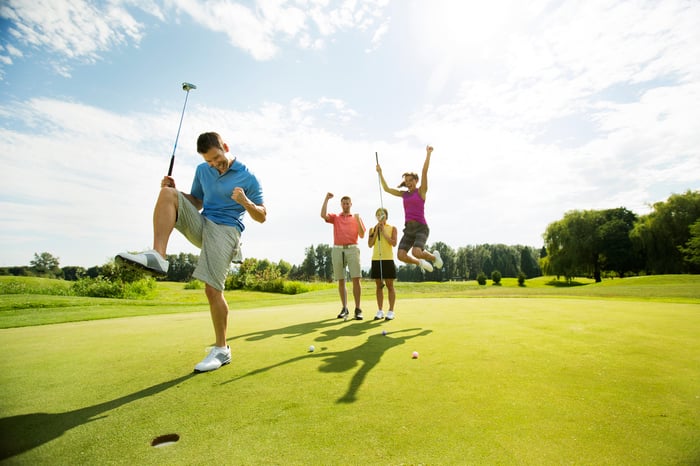 The golf equipment giant hasn't simply been sitting idle on its profits, but has directed them toward increasing its financial health. It deleveraged from a 2.3 leverage ratio in Q2 2020 to a lean 0.7 ratio by the end of Q2. It has pared its debt by $177 million since last year, with total debt now standing at $346 million.

Adding value for shareholders, Acushnet also continues to pay its quarterly dividend of $0.165, with the next dividend to be paid on Sept. 17. It is also repurchasing shares rather than diluting its stock with additional issues. While the $40 million in repurchases expected for all of 2021 is rather modest, it still shows intent, and direct action, to boost the quality of shareholders' investments.

While Acushnet's U.S. sales accounted for approximately 50.5% of the total in Q2, other areas of the world also saw significant growth. Year-over-year growth was 185.6% in Europe, 106.3% in Japan, 47.2% in Korea, and 112.8% in the rest of the world. Many of these regions have had periodic lockdowns and travel restrictions interfering with their golf tourism, making the growth even more notable.

According to an Allied Market Research press release, the worldwide market for golfing apparel is expanding at a 6% compound annual growth rate and is expected to continue that trend through 2030. The size of the market, an important one for Acushnet, has the potential to almost double by that year, increasing from $834.1 million last year to $1.55 billion in 2030.

Acushnet's strong presence in significant overseas golf markets gives it a broader base for revenue, and also might help it avoid the worst effects of any additional lockdowns governments might enforce. Its presence in multiple countries' markets means the growth in golf tourism will be to its benefit, and local disruptions of any kind are less likely to have a serious impact on its overall performance.

Acushnet has managed to produce vigorous growth and expects its successes to continue into 2021's second half, despite supply chain difficulties. Golf balls are a major part of its business, with the Titleist golf ball line alone accounting for around $200 million in revenue during Q2. Some of the company's golf ball factories in America have been closed occasionally. For example, bad weather in Texas led to temporary closures.

CEO David Maher said during the Q2 earnings conference call Acushnet has reduced overseas production as "glove and ball factories in Thailand are under pressure as the country confronts escalating cases and low vaccination rates." Raw material for golf balls and golf clothing is also in short supply, further constraining sales. Absent these pressures, the company could likely deliver even larger revenue and earnings growth than expected during 2021's second half.

The biggest impact of the supply chain issues is in U.K. inventories, which are down between 10% and 20%. Lead times have increased for equipment, gloves, and shoes, but the company is still managing to maximize sales given these constraints. It is even moving ahead with introducing new products, including its T series irons, new wedge and putter models, and precision manufactured Titleist Pro V1 golf balls, among others. This suggests the company is largely taking the raw material and supply problems in stride.

Golfing has made big gains in popularity over past year, apparently driven by the same desire for escape to the outdoors and alternative entertainment as the recreational vehicle surge. According to the National Golf Foundation, 2020 saw the largest rise in the number of American golfers in 17 years.

The foundation reports the number of rounds played in June, the most recent month available, rose 0.4% year over year. However, rounds surged 45% in March, 81% in April, and 18% in May. The slower rise in June corresponds to a huge spike in rounds played in June 2020. Some of the deceleration may also be due to heavy June rains, which caused rounds played to drop over 8% in the South and nearly 5% at the southern end of the East Coast.

Golf has seen major, persistent gains in popularity during 2020 and 2021, which helps drive both top- and bottom-line surges for Acushnet and other golf equipment sellers. The question now is how long the golf craze will last, and whether it can last into next year. Acushnet's guidance calls for revenue to rise between 16.8% and 20.6%, reaching $1.93 billion to $1.99 billion. For comparison, 2019's full-year revenue was $1.68 billion, indicating strong growth continuing relative to pre-pandemic results in Acushnet's expectations.

Looking to the future, Maher said during the earnings call that "new participants are increasingly younger" and these new golfers are "hooked on the game." Maher also noted golf lessons are still elevated, all of which suggest interest in the game is likely to continue into the medium to long term for many of the newcomers, driving further sales of equipment.

While the possibility of a post-pandemic decline in golf interest remains, and supply chain problems could potentially put a dent in profits if they worsen, Acushnet Holdings' situation makes it look like a bullish company among leisure stocks, buoyed both by efficient business performance and the world's newfound, and potentially lasting, enthusiasm for golf.

Can Tiger Woods' Comeback Score Big for This Golf Company?