Please ensure Javascript is enabled for purposes of website accessibility
Log In Help Join The Motley Fool
Free Article Join Over 1 Million Premium Members And Get More In-Depth Stock Guidance and Research
By Anthony Di Pizio – Updated Aug 24, 2021 at 10:22AM

Investors are shunning this stock because of slow overall growth, but they may need to look deeper.

Paysafe (PSFE -0.73%) announced its second-quarter earnings report on Aug. 16, and investors responded with stern negativity, sending the stock down 15%. But by all accounts, the company delivered strong results, including measurable progress in its U.S. online gambling ambitions.

Paysafe is the biggest payment processor in iGaming (online gambling), serving some of the world's leading bookmakers and virtual casinos including European-owned Betfair and Pokerstars. It's now breaking into the U.S. market through both new and existing partnerships, and the U.S. has quickly become the company's fastest-growing region.

With the stock down over 55% from its highs, it might be a big opportunity for you to buy a piece of the emerging American online gambling industry. 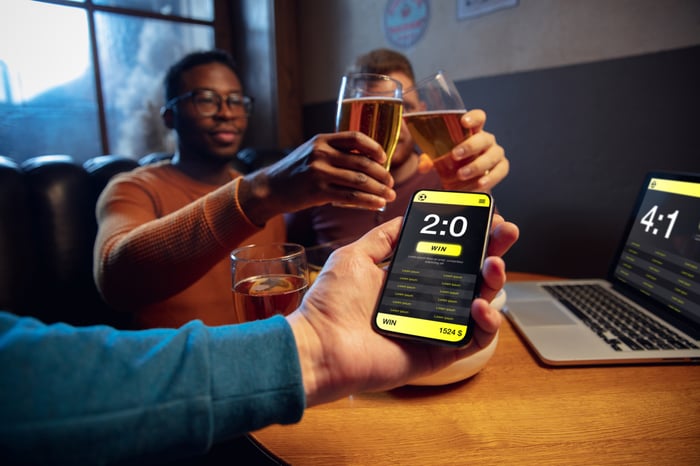 London-based Paysafe is new to the U.S. markets, listing publicly back in March through a deal with Foley Trasimene Acquisition II, a special purpose acquisition company. Investors have recently been concerned about slow overall growth, but peeking below the surface reveals fast-growing segments that are gradually becoming a larger part of the total revenue picture.

Online gambling is commonplace in many parts of the world, but the U.S. government has been slow to legalize it. The decision is now left to the individual states, and 17 of them have allowed the practice in various forms, with an another seven set to join that group in 2021 and 2022.

Paysafe owns key assets like Skrill, a digital wallet, and Neteller, which facilitates payments between consumers and merchants. The company has leveraged these brands to power payments for gambling companies in 15 U.S. states, but an inkling of its potential might be seen north of the border, where it processes 100% of the volume for regulated online poker, casinos, sports betting, and iLottery games in Canada.

The U.S. is a more fragmented market with differing rules from state to state, but Paysafe is hitching its wagon to established online-gambling powerhouses as they blaze a trail through the country.

It has an existing commercial relationship with Flutter Entertainment, a European gambling giant that's tearing through the U.S. with its new online sports betting subsidiary, Fox Bet. Paysafe has been a part of this growth every step of the way, and in June the two companies signed an expanded deal to partner in Fox Bet's newest venture in Michigan.

Paysafe adds certainty to its business by leveraging these global relationships to capture share in the U.S., an online gambling market that it expects could be worth up to $47 billion by 2025. Right now, the company has a connection to 75% of all U.S. operators, so the faster this industry grows, the bigger it becomes as a portion of Paysafe's total business.

Paysafe hit the high end of its second-quarter guidance in most financial metrics, including revenue, which grew by 13%. But investors were concerned about that growth rate combined with a lack of improved guidance for the rest of this year, especially considering the strong increase in total payment volume.

But there's a really bullish story below the surface in the eCash segment, which captures revenue derived from online gambling payments and purchases of digital goods in video games.

Paysafe has a global agreement with Microsoft to facilitate payments on the Xbox platform, where consumers purchase in-game digital products. The deal covers 22 countries and is a step up from the company's existing operations in this area with customers like Riot Games, the parent of popular online game League of Legends.

But most of Paysafe's focus appears to rest on the expansion of its partnerships with online gambling providers as the U.S. grows to be a world-leading market. Payment volume in the company's North American iGaming business grew by 72% year over year in the second quarter, and revenue was up 48%. It's only 1% of the company's total revenue right now, but represents a big opportunity for growth.

A great opportunity for investors

While Paysafe is the global leader in the iGaming payments industry, it offers investors other exciting reasons to buy it.

In March, the company signed a deal to use Coinbase Global's leading cryptocurrency exchange to add crypto to its Skrill digital wallet. Customers in most U.S. states can now buy and sell 37 different cryptocurrencies using Skrill, and can also set Bitcoin as a base currency to transact in.

Paysafe has proved to be nimble when it comes to new technologies, quickly pivoting to offer its customers access. Analysts expect the company to wring out a small profit this year of $0.03 per share, with further improvement in 2022. But with a $6 billion market capitalization and projected 2021 revenue of up to $1.55 billion, the stock trades at just 4 times sales at recent prices as investors remain wary of the company's overall growth trajectory.

But for patient long-term investors, there's no reason this stock can't ascend toward its all-time highs near $20 over the next couple of years as the higher-growth segments become a more impactful part of the business.