The stock prices of these out-of-favor debutantes could heat up in the next four months.

It isn't easy to go public these days. More than half of the companies that hit the market with IPOs in 2021 -- 168 out of 318 -- are trading for less than their IPO prices. Some of those popped sharply higher on their first day of trading, only to give it all back and then some.

It might not end badly for all of these companies, though. I feel that Vizio (VZIO 0.70%), Coupang (CPNG -1.31%), and Krispy Kreme (DNUT 5.82%) have the ingredients they'll require to bounce back before the end of the year. 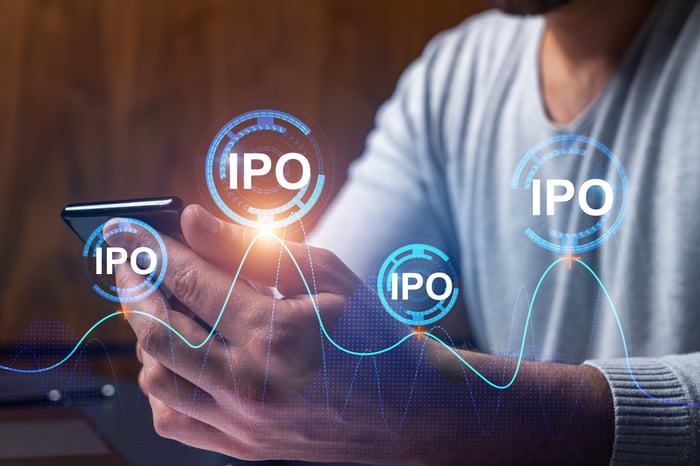 Could Vizio be the next Roku (ROKU 1.59%)? Right now, the maker of smart TVs just isn't connecting with investors. It hit the market at $21 in March, but closed more than 5% below that level on Tuesday.

Vizio is becoming a household name in smart TVs, but that's a cutthroat market characterized by manufacturers that push their flat-screen high-def televisions at perpetually dropping prices. It's clear that investors weren't wowed by the prospects of owning this one -- the stock was a dud out of the gate. Despite that $21 a share IPO price, Vizio stock opened its first day of trading at $17.50 and closed that session at $19.10.

The bullish case for Vizio begins with the fact that it's not losing money in its competitive market. It has been profitable in back-to-back years, and total its revenue climbed by 11% last year to top $2 billion.

Here is where the story gets better than Vizio's market-lagging share price would indicate, and it's a story that will sound somewhat familiar to Roku investors. Vizio's TV sales rose by just 7% last year to $1.9 billion. The real growth driver for the company is its SmartCast streaming platform. Just as Roku was misunderstood by many as a hardware play when it first went public, there's a faster-growing platform business in the mix here. Sales from Vizio's platform segment surged by 133% last year, and while it accounted for just 7% of revenue in 2020, it provided 38% of total gross profit. And it accounted for 16% of total revenue in 2021's second quarter -- in other words, the platform segment is rapidly becoming a bigger part of the overall business.

There were 14 million active SmartCast accounts as of the end of June, a 43% year-over-year increase. Average revenue per user (ARPU) has grown even faster -- it was up 90% to $16.76. That's roughly half of Roku's ARPU, but SmartCast is clearly the catalyst that could lift Vizio stock back above its $21 IPO price.

If you're looking for a little more growth, Coupang would seem to fit the bill. South Korea's leading online retailer has rattled off 15 consecutive quarters of more-than-50% top-line growth. It has a bigger moat than you would expect for an e-commerce company, largely because of its network of 100 fulfillment centers across South Korea -- there's one within seven miles of 70% of the country's residents. This allows Coupang to do things that other e-commerce providers in South Korea can't. Place a grocery order by midnight and it will be on your porch before the sun rises. If you need to return merchandise, you can leave it outside your door and an overnight delivery driver will pick it up while they're on their route.

Coupang is trading 9% below its $35 IPO price, and it's not for a lack of business growth. Revenue rose 71% year over year in its latest quarter, as a 26% increase in active customers was enhanced by a 36% surge in revenue per active shopper.

Let's end with a nod to investors who have a sweet tooth: Krispy Kreme went private five years ago, but the "hot doughnuts now" chain is back in the public market again after its IPO last month.

The IPO seemed as if it was going to be a world of hurt for investors. The initial per-share pricing range was $21 to $24. However, weak demand resulted in underwriters pricing the offering at $17.50, and the stock opened at $16.30 on its first day of trading. It did close at $21 that day -- the low end of its initial range -- but that was as good as it got for Krispy Kreme. It traded briefly below $13 in August, but as of Tuesday's close, it was just 3% below its $17.50 starting line.

The good news here is that Krispy Kreme is growing. Its annual sales have more than doubled since it last traded on the market in 2016. And yes, its market cap is also more than twice what it was five years ago.

Business has been holding up even through the pandemic. Revenue rose by 17% last year following a 21% jump in 2019. If Krispy Kreme managed double-digit percentage growth when many millions of us were working from home, one can imagine that things will get even better when more of us return to our workplaces and regain the opportunity to stop during our commutes to pick up some doughnuts to share with our colleagues.

We're already seeing momentum build. Krispy Kreme's revenue rose by 23% in the first quarter and accelerated to a 43% ascent in Q2. The biggest thing keeping the stock price in check right now is the red ink. The company has been losing money through at least the last three years. But growth doesn't come cheap. This is still a tasty turnaround story waiting to be digested by hungry investors.