The company's share count has increased nearly 20-fold in just one year.

When a company issues shares, it dilutes existing shareholders who end up owning less of the business. That can also lead to a falling share price because a flood of shares on the markets can instantly create an excess of supply. And it doesn't always have to be through an offering that more shares are issued. Warrants, for example, allow people to buy more shares at a specified price.

One company with a lot of warrants and incredibly high dilution is Sundial Growers (SNDL 1.65%). The cannabis producer reported its latest earnings in August, and the one number that stood out to me was not revenue or profit growth, but just how many more shares outstanding it has compared to a year ago. The company is a dilution machine, and even if it suddenly starts generating strong growth numbers, that may not be enough for investors to earn a good return given the possible dilution. 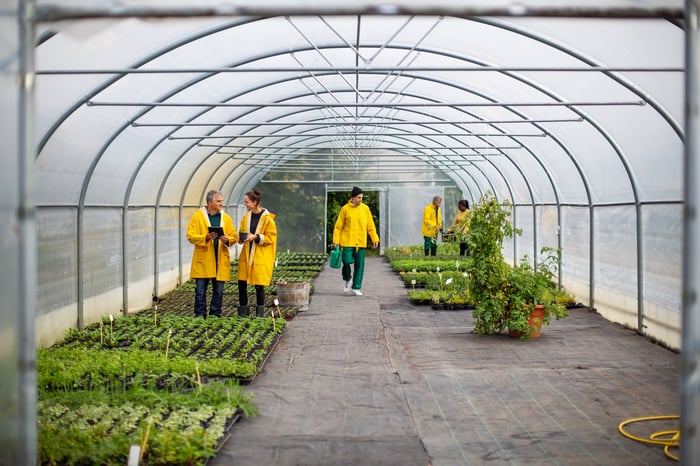 By the time the second quarter, which ended June 30, was over, Sundial's total shares outstanding was a little over 2 billion. That's nearly 20 times the 105 million shares it had outstanding a year earlier. If the company was generating that kind of revenue growth, it would be one of the hottest growth stocks out there. But increasing its share count by that number is alarming.

What's impressive is that overall, Sundial's stock is still up over 80% in the past 12 months, outperforming the Horizons Marijuana Life Sciences ETF, which has climbed just 28%. A big part of the reason is that Sundial has been a popular meme stock this year, benefiting from a lot of buying by speculative retail investors -- even though the business itself has been underwhelming. In Q2, the company's net revenue of 9 million Canadian dollars was down 55% year over year as Sundial has shifted its operations to focus more on branded retail sales (and away from wholesale).

While the company has weathered the storm thus far, that doesn't mean investors should expect that the stock will continue generating these types of returns over the next 12 months, especially as the company will likely issue more shares in the future.

Warrants are one way the company can issue more shares even without announcing a specific offering. An easy way to gauge how big of a problem warrants may be for a stock is to do a search for the term on the company's income statement, including its notes. In Sundial's most recent earnings report, there were 100 instances of the term "warrants," which is up from 77 a year earlier. Since the start of the year, the company has issued more than 152 million shares related to warrants, while regular share issues topped 957 million.

As of the end of Q2, the company had more than 99 million derivative warrants outstanding (it also has simple and performance warrants, which are not as significant), most of which are at an exercise price of $1.50. That's nearly double the 51 million derivative warrants that were outstanding a year earlier. However, the exercise price then was $1.20 or lower. Once the stock rises higher than the exercise price, eligible warrant holders have an incentive to exercise and buy shares at the lower price and sell for a profit.

But it isn't just warrants that investors need to worry about. Over the past three months, Sundial burned through more than CA$70 million in cash from its operating activities. It also spent another CA$192 million on investing activities. While its cash position may be OK -- its unrestricted cash balance as of Aug. 9 was CA$760 million -- the continual cash burn means that the stockpile will lessen if the company doesn't issue more shares. One area where it has been contributing a lot of money has been to SunStream, a joint venture it has with private equity firm SAF Group. As of July 7, Sundial had contributed CA$538 million to SunStream.

Sundial's business is perplexing because while the company is in a decent financial position given its strong cash balance, it isn't growing its top line and the business has been changing in light of its investing activities. On July 20, it closed on its acquisition of Inner Spirit, which has over 100 pot shops across Canada, instantly making Sundial a large retailer in the sector.

Amid all of these changes and new ventures, the need for cash is likely going to remain high. For investors, that means they need to be careful with the pot stock because another share issue may not be far away, especially if the company wants to acquire another business or put more money into SunStream. Although Sundial has benefited from the meme hype this year, that's not something investors can rely on in the long term. In the past six months, the stock has fallen more than 40% (the Horizons ETF is down 32%) and more dilution could result in greater losses down the road.