It's no surprise that analysts expect solar energy generating capacity to continue growing. In its renewable energy 2021 market update, the International Energy Agency said it believes solar energy generation growth will continue to break records with the annual additional capacity growing at a rate 50% higher than 2019 levels.

That view was reinforced by a recent U.S. Department of Energy report brief that said the push to expand renewable energy "could move solar from 3 percent of [U.S.] generation today to over 40 percent by 2035." That means investments in the sector could benefit greatly. These three names are ones investors should consider. 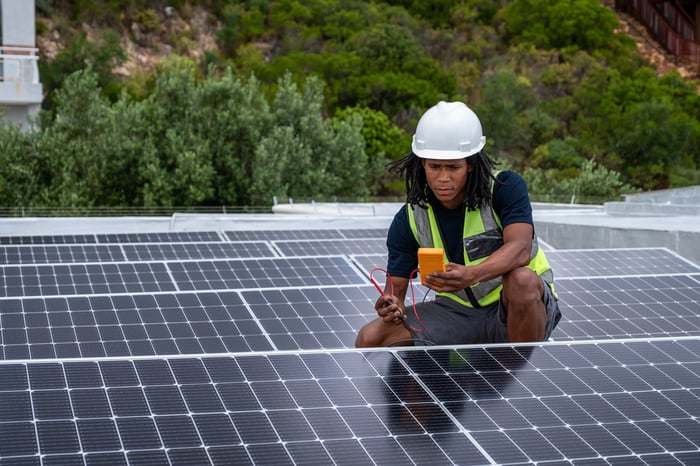 1. Brookfield Renewable: Siding with a pro

One way to get in on the trend is to invest with a professional that makes the big decisions. Brookfield Renewable (BEP 1.08%) (BEPC 0.80%) strategically allocates its capital to renewable energy projects. Brookfield Renewable isn't a pure-play on solar power. About 20% of its business is with utility-scale solar assets and distributed-solar generation. The balance is hydro and wind assets and battery storage facilities.

But the company has been active in growing its solar presence. It acquired the remaining interest in TerraForm Power it didn't already own in 2020 and privatized the company. Terraform owns a large-scale and diversified portfolio including contracted solar assets mostly in the United States.

Brookfield is global, however, with assets under management in North America, South America, Europe and Middle East, and the Asia Pacific region. Investors would do well to have that level of experience managing their money. Brookfield Renewable CEO Connor Teskey said it best when announcing the company's record 2020 results, stating, "Our size, scale across multiple technologies, and depth of operating and development expertise continues to be a meaningful differentiator in sourcing growth opportunities, and executing large, high value investments."

If the goals of the Biden Administration come to fruition, the reduction in the cost for solar generation should be a boon for leading residential solar panel and services company Sunrun (RUN 3.18%). Solar system costs have already dropped significantly in the last decade, and the administration has lofty goals for even further reduction by 2030.

The cost of solar generation dropped by 75% and 77% for residential and commercial use, respectively, from 2010 to 2020, according to the DOE report. And the administration wants to invest further to drive solar generated electricity costs even lower by 2030 as shown below.

Those would be attractive levels versus today's typical electric utility rates. And it could drive many home and business owners to make the investment knowing the returns over time would be attractive. The DOE says it sees reduced costs through technology and innovation, in addition to investment tax credits and loan guarantees.

Sunrun already reported record installations in its second-quarter period ended June 30. The company also increased its guidance for full-year installation growth to 30% in the report. That growth could just be the beginning should the administration's goals be realized.

There's something to be said for ease of use, and Enphase Energy (ENPH 7.01%) may be the leader in offering that to homes and businesses. It provides solar systems from the microinverters used to convert energy at the solar panels to battery storage and all the software in between.

Solar is already the fastest-growing source of new electricity generation in the nation. Solar capacity has grown by 40 times since 2010, but still only represents 3% of electrical supply in the U.S. As mentioned above, the DOE report said that level could move to 40% by 2035. For that to occur, the rate of solar adoption would have to accelerate by three to four times faster than its current rate by 2030.

Enphase has been growing along with solar deployment, and stands to gain further from accelerating solar generation. It has increased its revenue 250% on a trailing-12-month basis over the last three years. The company added its battery storage offering in June 2020, giving it a fully integrated solar system for residential or commercial use. Enphase recently expanded the storage product in its first market outside the U.S., beginning with a launch of the systems in Germany.

The stock's valuation is already building in continued growth with a current price-to-earnings ratio of about 130. But it is in a prime position to grow into that valuation for long-term investors looking to ride the wave of accelerating solar adoption over the next decade-plus.