Please ensure Javascript is enabled for purposes of website accessibility
Log In Help Join The Motley Fool
Free Article Join Over 1 Million Premium Members And Get More In-Depth Stock Guidance and Research
By Rhian Hunt – Aug 25, 2021 at 7:00AM

Though not directly connected, both companies tap into the same sector and its trends.

Foot Locker (FL 3.70%) put its best foot forward in the stock market on Friday, Aug. 20., after reporting its fiscal second-quarter results and stomping on Wall Street consensus expectations at both the top and bottom lines. The shoe and sportswear company's share price was up more than 7% when trading closed for the weekend and rose after hours, too. However, its win also triggered a surge in the share price of Dick's Sporting Goods (DKS 2.28%) and a flurry of analyst optimism ahead of the sporting goods retailer's Aug. 25 earnings report.

Here's why the outlook appears sunny for both companies:

How things are looking for Foot Locker

For the its Q2 period ended July 31, 2021, Foot Locker took a big step up over last year's performance. Its $2.3 billion in revenue jumped nearly 10% year over year, and earnings per share (EPS) rose nearly tenfold from $0.43 to $4.09. The strength of its gains caught major analysts unaware, with EPS coming in $3.10 higher than expected and revenue outpacing their expectations by $190 million. 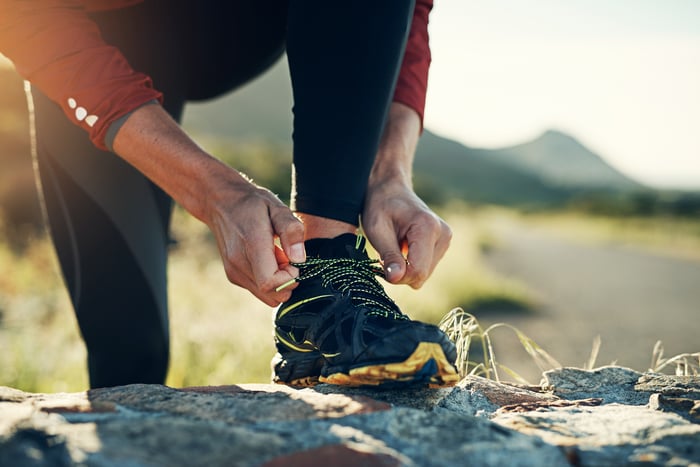 Importantly, this year's Q2 also significantly outdid Q2 2019's pre-pandemic results when it generated $1.8 billion in revenue and $0.55 of EPS.

Another positive: the company recently announced it is boosting its dividend 50% to $0.30 quarterly from $0.20.  So far this fiscal year, it has also repurchased $41 million in stock or about 745,000 shares. Earnings and comparable sales, or comps, are expected to rise in the third quarter based on "a strong back-to-school period," according to CFO Andrew Page during the company's recent Q2 earnings conference call. Page said that growth is coming from "strong demand, our focus on more full-price selling, combined with our disciplined expense management." CEO Richard Johnson added that clothing and accessories were very popular as were shoes for women and children.

Foot Locker's surge of success isn't limited just to sales of its existing product lines. The company also made a pair of acquisitions just this past month that its CEO expects to be accretive in the near future. One was its $360 million buyout of Japanese athletic clothing retailer Atmos, which Johnson says helps Foot Locker's "expansion initiative in the rapidly growing Asia-Pacific market, establishing a critical entry point in Japan." With more than 60% of revenue generated through digital orders, Atmos will also help to strengthen Foot Locker's e-commerce efforts.

The other acquisition, for $750 million, was West Coast inner city shoe and clothing retailer WSS, which saw revenue grow at a 15% CAGR (compound annual growth rate) for the three years through 2020. During the conference call, Johnson described both acquisitions as "high-growth businesses" and said he sees "a path to approximately $1 billion in sales in the next five years" for WSS. He expects the two subsidiaries together to add between $0.44 and $0.48 to EPS next year.

Why Dick's Sporting Goods jumped, too

The reason Dick's and several other sporting goods companies rose sharply immediately after Foot Locker published its Q2 results is that the mushrooming sales of athletic shoes and sportswear reaffirm strong demand for outdoor goods among Americans. In the wake of COVID-19 lockdowns and shuttering of usual entertainment venues (theme parks, restaurants, casinos, and cruise ships, among them), Americans have turned to traveling to picturesque locales in recreational vehicles or RVs, taken up golfing in record numbers, and generally driven growth in the outdoor entertainment and leisure sector.

The stock market seems to have taken Foot Locker's success as a sign that Dick's Sporting Goods will also benefit from strong, persistent growth in this sector. Data reported by Outside magazine backs up this idea. Visitors to Yellowstone National Park rose by 14% compared to 2019 during 2021's first five months, and May visitor numbers were 11% higher than in the pre-pandemice year. Other parks are seeing a similar surge, and car rentals near these vacation spots are strongly elevated.

With Dick's Q2 earnings report coming up, analysts are giving it bullish ratings and raising their price targets for its shares. Analysts at Cowen and Telsey Advisory Group have both raised their estimates on earnings, share price, and other metrics, citing the performance of Foot Locker and other peers as a harbinger for Dick's upcoming results. Dick's already had an outstanding Q1 with 115% same-store sales gains, revenue up 11% from 2020 and 22% from 2019, and a hearty guidance boost.

Overall, the upbeat sentiment about both companies looks justified. Both are benefiting from the surge in outdoor activity that has been going on for over a year now and shows no signs of weakening. In the case of Foot Locker, the company is clearly rolling its gains back into investment in future success with its dividend increases, deleveraging, share repurchases, and a bold acquisition strategy.

Dick's Sporting Goods is benefiting from the golf surge, continued opening of new stores, and a resurgence in team sports in the back-to-school season. These consumer discretionary stocks look like winners under current trends and are well worth considering as additions to your portfolio.

Like Bed Bath & Beyond? This Turnaround Stock Is Far More Promising
360%