Please ensure Javascript is enabled for purposes of website accessibility
Log In Help Join The Motley Fool
Free Article Join Over 1 Million Premium Members And Get More In-Depth Stock Guidance and Research
By Leo Sun – Aug 26, 2021 at 6:40AM

Facebook (META 1.78%) recently introduced Horizon Workrooms, a new virtual reality (VR) platform that enables up to 16 people to participate in meetings as their digital avatars. It also supports up to 50 people per room if they join via their webcams instead of digital avatars.

Horizon remains in beta testing, but Facebook is already offering the app as a free download for its Oculus Quest 2 users. Horizon can also access and share a user's files through the new Oculus Remote Desktop companion app. 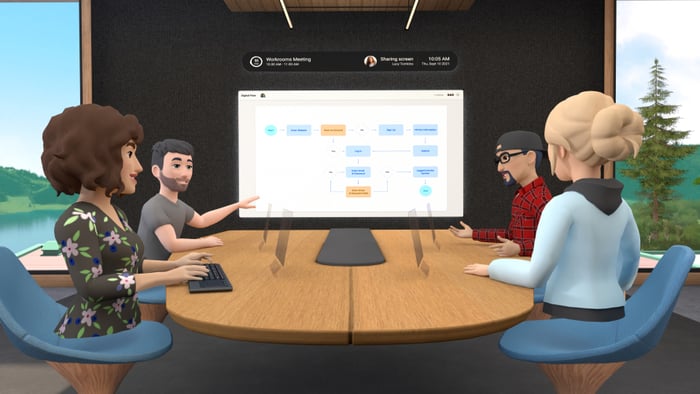 Horizon seems like a natural expansion of Facebook's virtual reality ecosystem, which already includes headsets and video games. It succeeds Facebook Spaces, the VR chat platform that was in use from 2017 to 2019, and complements Messenger Rooms, the video conferencing platform it launched last year.

Facebook's introduction of Horizon Workrooms also suggests it's getting serious about challenging Zoom Video Communications (ZM 0.09%) in the remote collaboration space. Should Zoom, which became a synonymous with video calls during the pandemic, worry about Facebook's newest VR platform?

Facebook gradually built a VR ecosystem after its acquisition of Oculus VR in 2014. It launched Oculus' first commercial VR headset in 2016, refined it into its first stand-alone Oculus Quest headset in 2019, then followed it up with the more powerful Quest 2 headset in 2020.

SuperData estimates Facebook will ship at least 3 million Quest 2 headsets this year. That's a small figure compared to annual smartphone, PC, and gaming console shipments, but it would still make the Quest 2 the undisputed leader of the stand-alone VR headset market.

Facebook is leveraging that early-mover advantage to build a VR ecosystem. Last May, it surpassed $100 million in VR content sales for the Quest within its first year. That figure hit $150 million last September. Facebook retains a 30% cut of all third-party VR app sales, but it's been acquiring more VR game studios to expand its library of first-party content.

Facebook still generated 98% of its revenue from ads last quarter, so the expansion of its VR universe won't move the needle for its core business anytime soon. However, Facebook believes its platforms will form the foundation of a "metaverse" in which the physical and digital worlds are combined.

That metaverse could expand Facebook's ecosystem beyond PCs and mobile devices, and reduce its overall dependence on targeted ads -- which has made it a popular target for critics and regulators in recent years. That's why Facebook emphasizes that Horizon won't monitor a user's work conversations and materials to craft targeted ads for its other platforms.

Should Zoom be worried about Horizon?

Zoom became a household name during the pandemic because its brand was catchy, it was easy to join meetings, and it provided a simpler interface than other enterprise-oriented video conferencing platforms.

Those strengths enabled Zoom to disrupt a saturated and mature market. They also prevented newcomers like Facebook's Messenger Rooms from gaining much ground.

When Facebook launched Messenger Rooms last April, many analysts and media outlets cited it as a threat to Zoom. However, Zoom's revenue still surged 326% to $2.65 billion in fiscal 2021, which ended this January, as it gained tens of millions of new users during the pandemic. 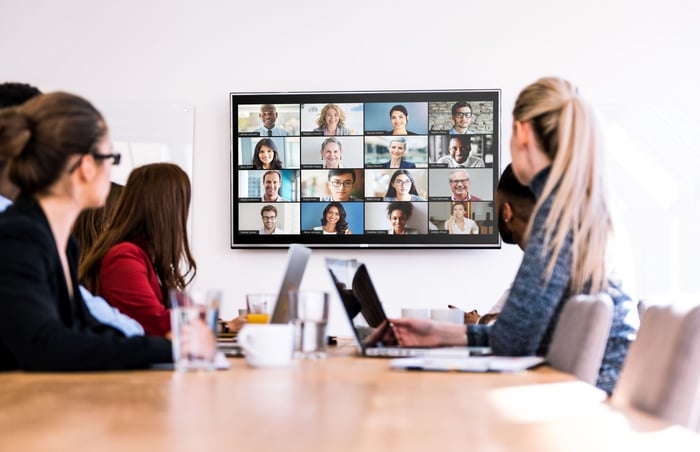 As for Facebook's Horizon Workrooms, they're the polar opposite of Zoom's streamlined meetings. Horizon's VR avatar users will need to own Quest 2 headsets to interact with their coworkers in a virtual space. It seems highly unlikely that many companies will purchase VR headsets for their employees simply so they can hold meetings in a digital room as cartoon characters -- especially when webcams and smartphones are already prevalent and easier to use.

Moreover, there are already several ways to conduct Zoom meetings in VR through third-party apps and 360-degree cameras. These solutions don't turn people into digital avatars, but enterprise customers that want to dabble in VR meetings might prefer these simpler solutions instead.

On the surface, Facebook's Horizon Workrooms seem like a next-gen threat to Zoom. But if we dig deeper, we'll notice the two platforms serve completely different markets.

Horizon targets tech-forward companies that want to experiment with new ways to collaborate in virtual reality. Zoom targets everyone else -- including most individuals, companies, and schools.

Therefore, I doubt Horizon Workrooms will affect Zoom any more than Messenger Rooms did last year. For now, investors should focus on Zoom's more direct competitors in the enterprise space, and whether or not it can maintain its long-term momentum after the pandemic ends.