This top gaming stock has tripled in value in the last five years.

Zynga (ZNGA) has been one of the best-performing video game stocks over the last five years. If you had bought shares when CEO Frank Gibeau took over in March 2016, you would have more than tripled your money.

The interactive entertainment industry is full of opportunity for leading studios. Zynga owns some of the most popular titles in the mobile market, including Words With Friends, Zynga Poker, and FarmVille. It has a massive global reach across 175 countries and regions, but with 2021 bookings expected to be $2.8 billion, Zynga is still a very small company in the $90 billion mobile game market.

The wide gap between annual bookings and the size of the market is exactly what growth investors want to see. It shows that Zynga can grow for a long time and deliver above-average returns, especially since mobile is the fastest-growing market in the video game industry.

It is not too late to invest in Zynga. Moreover, given the recent post-earnings sell-off, it might be a great time to consider buying shares. 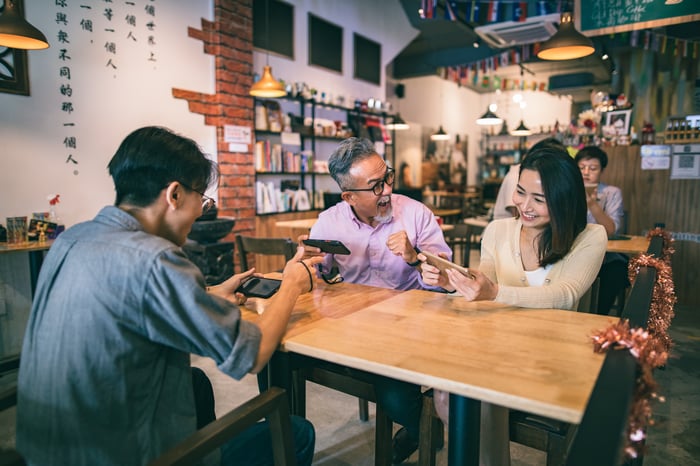 Zynga reported second-quarter bookings of $712 million, up 37% year over year. It also posted a surprise profit of $0.02 per share, but bookings came in below the consensus estimate of $716 million. The stock is down 10% since the Aug. 5 earnings release. It's wasn't so much the miss in bookings that caused the drop but the reason why the miss happened.

During the Q2 earnings call, management said the great reopening and Apple's privacy changes on mobile devices created "choppiness" in Zynga's business. As COVID-19 restrictions eased in recent months and people got out more, Zynga saw softness in bookings starting in late May. The weakness mainly impacted merge titles, such as Merge Dragons! and Merge Magic!.

Management also explained that Apple's new privacy changes starting with iOS 14.5, which require app developers to ask the user's permission to track them or access their device's advertising identifier, increased the cost to acquire new players. As a result, Zynga pulled back on user acquisition spending, since management only spends when it can hit internal return targets. But the lower spending meant the company couldn't bring in new players to offset the ones that had stopped playing. Monthly active users still nearly tripled year over year to 205 million, thanks to the acquisitions of Peak and Rollic during 2020.

These problems are short-term in nature and don't impact Zynga's long-term growth trajectory. The weakness in merge titles stemmed partly from higher competition in that popular genre of the mobile gaming market. Zynga experienced the same obstacle a few years ago with Zynga Poker. Management made some adjustments, and in the second quarter, Poker delivered the best Q2 bookings performance in nine years.

The reopening mainly impacted recent player acquisitions that started playing Zynga's games in 2021. Players that have been with Zynga going back before the pandemic, or right after the public health crisis started, are still engaged. Gibeau even mentioned that these older cohorts are "monetizing more," which suggests that they are deeply invested in the company's games and contributing to growth in bookings.

As for Apple's privacy changes, Gibeau said, "We are already seeing improvements in user acquisition yields." In fact, Zynga has already started acquiring new players who are spending in some of its franchises. Specifically, Gibeau said the company's social casino games performed "really well" recently.

Looking ahead, Zynga has several growth initiatives underway. Management expects upcoming game releases to drive "meaningful" organic growth in 2022. FarmVille 3 is now expected to release in the fourth quarter. Plus, Star Wars: Hunters will enter a soft launch by the end of the year.

Zynga also just completed the acquisition of Chartboost, which will fill out the company's advertising capabilities. Chartboost has a global audience of over 700 million monthly users on its advertising and monetization platform.

Finally, coming on top of the company's 36% year-over-year growth in international bookings last quarter, Zynga recently announced it was acquiring StarLark, the maker of the popular Golf Rival title, for $525 million. This acquisition will give Zynga a presence in the massive Chinese market, further extending its global reach.

The stock is a better value

Zynga is investing in the right areas: growing its game portfolio, extending its international reach, and building a more robust advertising platform to further monetize its 41 million daily active users.

The stock's price-to-sales ratio has dropped from 6 in 2020 to 3.9 at current price levels. That's a huge discount to top gaming stocks that trade between 5.7 to 7.3 times sales. At this level, Zynga offers a combination of value and growth, which makes it a great buy, in my opinion.