The pharmaceutical company saw its shares jump more than $26. 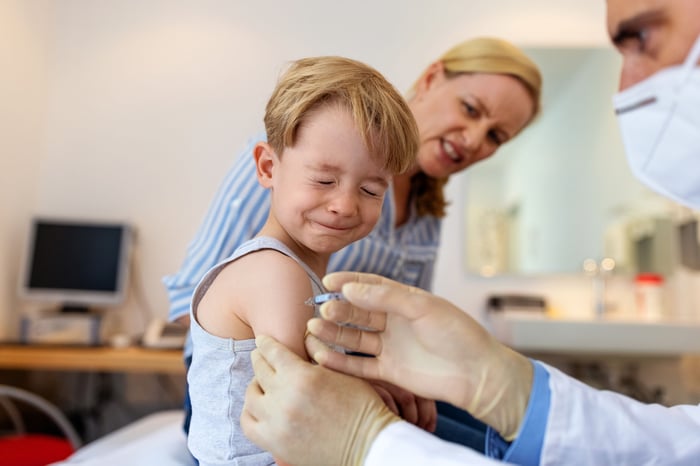 The company chose the same day of its second-quarter earnings report to announce that the FDA had given approval to Skytrofa, a once-weekly injection of the growth hormone somatropin, to treat children with growth hormone deficiency (GHD). The earnings weren't anything to write home about as the company reported revenue of $1.18 million, down from $1.65 million, year over year. The company lost $158 million, compared to $111.6 million in the same period in 2020.

However, the real news was about the company's future, not its current finances. The big deal with Skytrofa's approval is it is the first approved once-weekly growth hormone injection; and according to Ascendis' study, it showed superior results to Genotropin, a drug sold by Pfizer that is given once daily. According to the two-year phase 3 study of 161 children, those who received Skytrofa grew almost one centimeter more in a year than those who received daily shots. There were also no serious side effects or dropouts in the study. A once-weekly injection could be a big edge with consumers since that means patients will only need to be injected 52 times a year instead of 365 times.

Ascendis will move quickly to bring its first approved drug to market. While pediatric growth deficiency is a rare disease, the drug could easily bring the biotech company as much as $500 million a year in sales, as Pfizer made $427 million last year from Genotropin.

Ascendis, in an investor report, said that the global human growth hormone market is estimated at $5 billion, including $1.3 billion in the United States and a GHD global pediatric market of $700 million.

The company's next hurdle for the drug will be getting approval for its use in Europe. Skytrofa will help fund the rest of the company's pipeline of therapies for endocrinology and oncology, so the jump in the stock seems warranted.