Shares of the technical support providers have more than doubled this week.

Shares of Support.com (SPRT) surged higher on Thursday, climbing as much as 43.2% earlier in the session, ultimately ending the trading day up 41.1%. That's not all. The company, which provides technical support services and cloud-based software, has been on fire all week -- gaining more than 150% -- on the receiving end of an epic short squeeze and a benefit from a cryptocurrency connection.

While there was no specific news regarding Support.com today, there are a couple of tailwinds that have been driving the stock higher.

The company announced earlier this year that it plans a reverse merger with privately held Greenidge Generation Holdings, which bills itself as "the first 100% carbon-neutral Bitcoin (BTC -0.34%) transaction processor in the United States." With the ongoing adoption of digital currencies and the growing awareness of the negative environmental impact of cryptocurrency mining that relies on fossil fuels, Greenidge is positioning itself as a planet-friendly alternative. 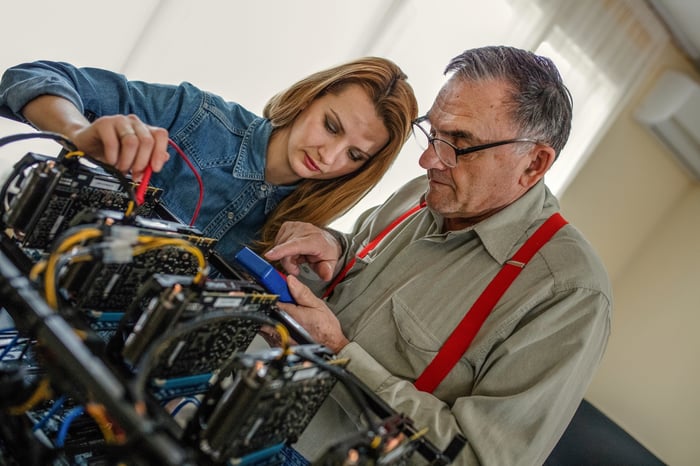 Additionally, Wall Street has been betting heavily against Support.com. More than 67% of its float was sold short as of Aug. 13, according to Yahoo! Finance. That amounts to more than 25% of the company's outstanding share count, making it the ideal candidate for a short squeeze. Further evidence that the bulls were in charge this week is that more than 95.7 million shares traded hands today, up nearly 11-fold compared to its average daily volume over the past three months.

The escalating share price and the resulting short covering become a self-fulfilling prophesy, driving shares ever higher. The combination of high short interest and the fervor surrounding cryptocurrency was enough to drive Support.com into the stratosphere today.