Bulls were impressed by Duolingo's robust growth in users and revenue, but bears balked at its decelerating growth, lack of profits, and frothy valuations. The bears have also expressed concerns about the app's recent ban in China, early sales of vested shares, and a post-pandemic slowdown.

Should investors chase Duolingo's post-IPO rally? Or should they wait to see a few more earnings reports before making a decision? 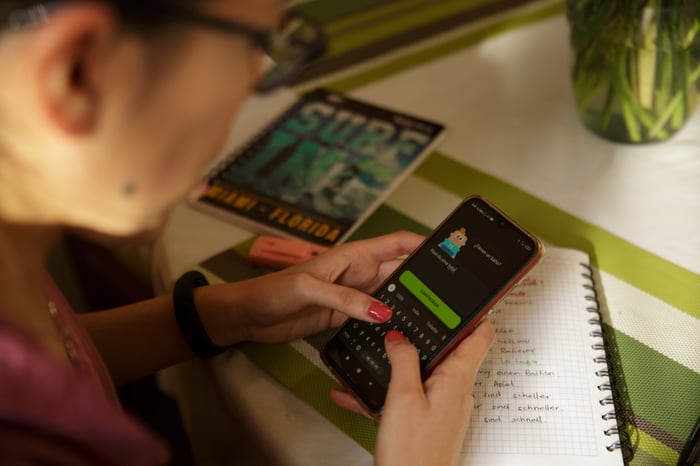 How does Duolingo make money?

Duolingo offers its online courses through its mobile app and website. It operates a freemium model: It monetizes free users with ads, while paid subscribers gain an ad-free experience with additional perks.

It offers one-month, six-month, and 12-month membership plans. The one-month plans are the priciest at $12.99 per month, while the 12-month ones are the cheapest with an annual price of $79.99 or less. It also offers the Duolingo English Test, a proficiency test for non-native speakers, as a separate paid product.

How fast is Duolingo growing?

Duolingo's sequential loss of MAUs and DAUs in the second quarter of 2021 hints at a post-pandemic slowdown, but it's still gaining more paid subscribers.

Between the end of 2019 and the second quarter of 2021, Duolingo's ratio of DAUs to MAUs rose from 19% to 24%. Its ratio of DAUs to paid subscribers also increased from 17% to 21%. Those rising percentages indicate that its gamified lessons are still locking in users and converting them to paid plans.

Duolingo's top-line growth looks impressive, but its bottom-line growth is wobbly. It remains unprofitable on a GAAP basis, but it generates a slim profit on an adjusted EBITDA (earnings before interest, taxes, depreciation, and amortization) basis.

Duolingo is struggling to turn profitable for two main reasons. First, it pays 30% of its revenue to app-store operators like Apple (AAPL -0.34%) and Alphabet's (GOOG -0.44%) (GOOGL -0.55%) Google during a member's first 12-month subscription, and a 15% cut in subsequent years. Duolingo believes it can reduce those costs by retaining its subscribers for longer than a year. However, gaining new users might offset that strategy, especially as the company expands into new markets.

Second, Duolingo is spending a lot of its revenue (33% in 2020 and 39% in the first half of 2021) on research and development. It expects that percentage to remain high as it develops new features and invests in higher-growth markets like China.

Looking ahead, Duolingo faces unpredictable headwinds. Its app was reportedly suspended in China in early August amid the country's ongoing crackdown on online education platforms, and it's unclear when (or if) it will return. The company also expects the growth of its English Test unit, which has been growing faster than its subscriptions and advertising units, to decelerate after the pandemic ends.

Duolingo's decision to allow its employees to sell a quarter of their vested shares within the first week -- instead of waiting for the 180-day lockup period to end -- also suggests it might be too early for retail investors to buy the stock.

Duolingo's stock currently trades at 20 times this year's sales. That high price-to-sales ratio might be justified if it can maintain a 40%-50% growth rate beyond 2021 -- but a lot of headwinds could throttle its growth. Therefore, I'd rather wait to see if Duolingo's business stabilizes before buying its stock.