Target (NYSE:TGT) and Macy's (NYSE:M) each reported solid earnings results in their most recent quarters this month. Management for both companies also announced changes that could bring additional foot traffic to their brick-and-mortar stores.

Macy's management said it would be adding Toys R Us stores inside its locations and on its website, and Target said it would be expanding its relationship with Walt Disney (NYSE:DIS) and adding more of its mini-shops within its stores. Let's look at each decision more closely and see if we can determine which will provide the bigger benefits to the retail host. 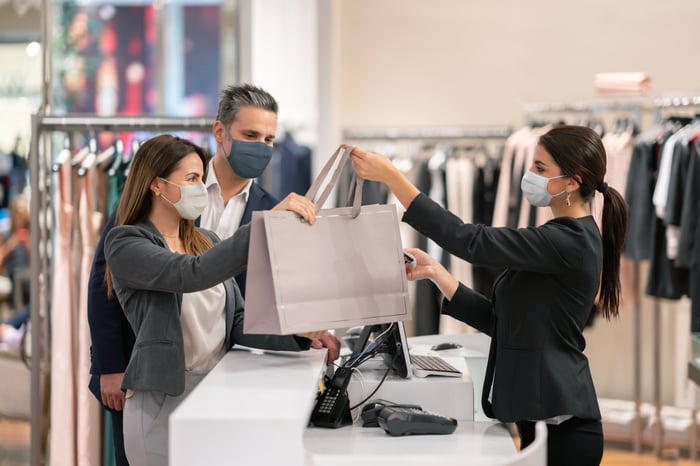 Toys R Us will have a presence in Macy's stores

On Aug. 19, Macy's announced a partnership with Toys R Us. U.S. customers will be able to shop for Toys R Us brands inside more than 400 Macy's locations beginning in 2022 (Macy's operated 572 stores in 2020) as well as on Macy's website immediately. Today, Toys R Us maintains a website accessible to U.S. toy shoppers as well as nearly 900 branded global stores outside of the U.S. Overall, the now-private company says it generates more than $2 billion in annual sales.

If the still-popular toy brand can bring a new cadre of customers inside Macy's stores, it would be a big help for the department store operator. Added foot traffic into Macy's stores as kids urge their parents to take them for a visit could lead to parents buying something from a different part of the store.

Macy's has been struggling somewhat in recent years to get people to come to its brick-and-mortar stores. In the fiscal year 2020, Macy's generated $25 billion in annual sales from its Macy's, Bloomingdale's, and Bluemercury stores. It's still unclear how much an added Toys R Us presence might affect overall earnings, but the retailer could use a revenue boost to help it manage the changes going on in the broader industry. 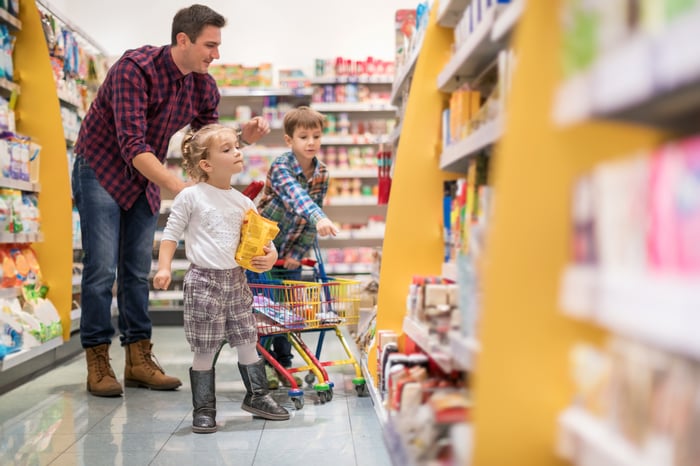 Target is expanding Disney shops to more than 160 locations by the end of the year. Image source: Getty Images.

More Disney shops coming to a Target near you

On Aug. 23, Target announced it would be boosting its total number of Disney shops inside Target stores to more than 160 locations by the end of this year (up from 53 shops currently). Disney products also have a highlighted presence on Target's website. The first 25 Disney shops in Target were opened in October 2019.

Interestingly, Target operates more than 1,900 stores, so the rollout of Disney shops appears to be proceeding somewhat cautiously. One reason for that could be Target's excellent sales performance during the pandemic. The company increased revenue by 19.8% in fiscal year 2020 to reach $93.6 billion.

Since Target is apparently not hurting for store foot traffic the way that Macy's is, it can afford to take a more cautious approach to expansion, testing for what works best, and looking for a further rollout if it likes what it sees.

Both moves are likely to have a positive effect on store foot traffic and revenue for their hosts. Toys R Us and Disney are popular brands for families with children. Adults might prefer the convenience of online shopping, whereas kids get excited about visiting a toy store, seeing, touching, and playing with products before they buy them.

That being said, the Toys R Us inclusion in Macy's stores has the potential for a larger impact, at least long-term. The first of the 400-plus locations won't open until 2022 and it's unclear how long the rollout will take. So short-term, Target should see some impact sooner as the 160 Disney shops will be up and running by the end of 2021.

In both cases, Target's and Macy's management can each be commended for these latest examples of apparently good decisions to help keep their businesses growing, including during a pandemic.