Please ensure Javascript is enabled for purposes of website accessibility
Log In Help Join The Motley Fool
Free Article Join Over 1 Million Premium Members And Get More In-Depth Stock Guidance and Research
By Jim Halley – Aug 27, 2021 at 11:37AM

Shares of the biotech that focuses on oncology drugs climbed more than 12% during the week.

The stock certainly wasn't buoyed by its fundamentals. It was coming off of disappointing second-quarter earnings. Clovis is a small-cap pharmaceutical company that focuses on oncology drugs, but sales of its only marketed drug, Rubraca, used to treat ovarian cancer, are down at the year's halfway point. 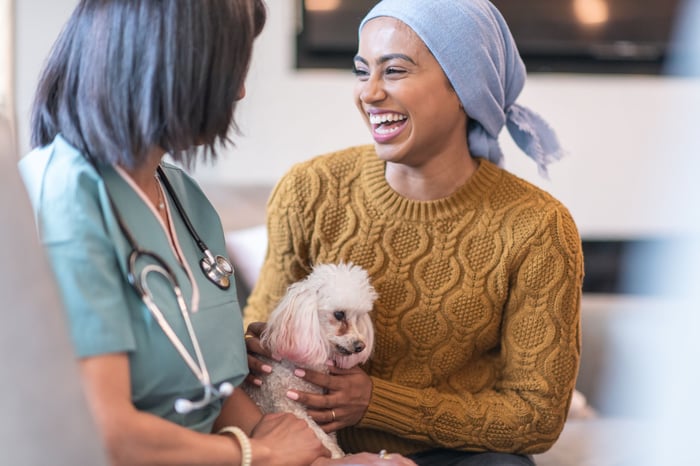 The company said that through six months, it had $74.8 million in revenue, down 9% year over year. The company has also lost $132.7 million in that time. That's down from the $191.5 million the company lost in the first six months of 2020, but that's because it has spent less on research and development.

So, why did the biotech stock rise? The stock has been heavily shorted and Reddit-influenced retail investors are buying the stock in hopes of a short squeeze. Basically, the plan is to boost the stock's price high enough that hedge funds and others shorting the stock will be forced to cover their positions, goosing the stock even higher. It makes sense -- rather than trying a short squeeze with a stock with a much larger market cap, Clovis' market cap of $537.58 million is easier to influence.

As anyone watching the market knows, short squeezes are not always effective. It's hard to get that excited about a stock with only one product that has had declining sales, but it's not all negative for Clovis.

First, the company has several trials underway to expand Rubraca's usage, possibly as a treatment for prostate cancer or for patients with solid tumors stemming from mutations in homologous recombination repair genes.

Second, the company's portfolio includes FAP-2286, which it is testing against solid tumors and it is working with Bristol Myers Squibb on a trial to test a combination of Clovis' lucitanib and Bristol's nivolumab in patients with advanced gynecological solid tumors.

Third, the company has blamed the COVID-19 pandemic for slowing sales, and if the pandemic ebbs, that would mean increased sales and optimism from investors for Clovis. In the long run, it's not a bad bet to see the stock going higher. Even with the recent run, it's a lot closer to its two-year low than its two-year high.

Why Clovis Oncology Stock Is Crushing It Today
356%