After it posted impressive growth this year, analysts see big upside for this streaming stock.

Roku (ROKU 1.63%) stock has been up and down this year. After soaring 148% in 2020, shares are currently up just 6% year to date, lagging the performance of the S&P 500. Valuation concerns seem to be weighing on the shares more than anything, because the business has had a great year.

Revenue grew 79% in the first quarter before accelerating slightly to 81% in the second quarter. Specifically, growth in average revenue per user (ARPU), a key monetization metric, is starting to come alive, accelerating from 20% growth in the third quarter of 2020 to 46% in the most recent period. 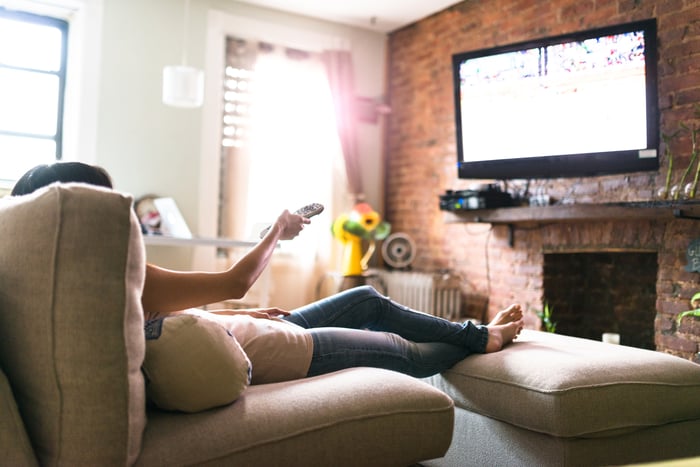 These impressive numbers show advertisers are starting to follow audiences over to streaming platforms, and Wall Street analysts are very bullish on the company's prospects. The average price target on the stock is currently $502 per share, representing about 40% upside from the current quote.

Here's why Roku is well positioned to see continued growth in advertising spending on its platform, which could be the catalyst that sends the stock toward those lofty price targets.

How Roku built an advertising magnet

Roku has made a couple of key moves over the last few years. The first came in late 2019 with the acquisition of Dataxu, a demand-side platform (DSP) that allows marketers to plan and buy video ad campaigns. In the second quarter of 2020, Roku integrated Dataxu's assets to form the OneView ad platform, which provides advertisers with data and tools to manage their ads across over-the-top (OTT) services, desktop, and mobile.

ARPU growth has accelerated in each quarter since Roku formed OneView. Smaller advertisers in particular are starting to invest in digital streaming platforms for the first time, which has contributed to Roku's recent growth.

While the second half of 2021 will present tougher year-over-year comparisons, it's apparent advertisers are starting to find real value in the company's content distribution, particularly through The Roku Channel, which has been growing faster than the rest of the platform.

Earlier this year, Roku acquired the global streaming rights to content from the now defunct Quibi. In March, it also acquired the popular home improvement program This Old House. This led to a record number of unique accounts watching The Roku Channel in the second quarter with streaming hours more than doubling year over year.

It's the combination of advertising capabilities, particularly in offering marketers high returns on their ad spending, combined with the compelling content offered through The Roku Channel that positions the company for more growth.

The recent round of ad buying from advertisers reveals Roku could see this part of its business explode over the next few years.

Connected-TV advertising is a massive opportunity

During the second-quarter earnings call, management reported it completed deals with all seven major agency holding companies. This is what's known as the upfront season when advertisers have a chance to sign deals at a discount ahead of the new season of content releases.

Roku said it closed these deals much earlier than it has in the past, and the spending commitments doubled year over year. Roku's senior vice president Scott Rosenberg said this is an "indication that streaming has arrived as a first-class citizen in the way brands think about allocating their annual budgets."

Connected-TV ad spending is estimated to grow from $6.4 billion in 2019 to $24.8 billion by 2024, according to eMarketer. Roku's platform revenue over the last four quarters is small by comparison at $1.7 billion.

The stars are aligning. Management said over 42% of the advertisers that bought ad time on Roku's platform were first-time upfront buyers, a sign the tsunami shift of advertising to digital platforms is accelerating. These advertisers are feeling urgency to follow viewers over to digital services, given the recent plunge in TV ratings for the 18 to 49-year-old demographic.

Advertising is still catching up

Despite the growth in the streaming market, advertising is still well behind the shift in viewers, who are increasingly moving over to digital services. Consider that 39% of TV viewing among the key demographic of 18 to 49-year-olds has already moved over to streaming, but the proportion of ad budgets moving to digital platforms is considerably less than that.

The investment case for Roku has centered around the expectation it will soak up the advertising that will inevitably shift over to digital platforms. Roku's latest earnings report shows that shift is well underway.

Given the powerful tailwind behind Roku's business, analysts are probably right. This is likely to be a $500 streaming stock within a few years.

Why Roku Stock Was Down This Week

Why Roku Stock Jumped on Friday

Is It Time to Buy the Worst-Performing Consumer Growth Stocks?
363%