Please ensure Javascript is enabled for purposes of website accessibility
Log In Help Join The Motley Fool
Free Article Join Over 1 Million Premium Members And Get More In-Depth Stock Guidance and Research
By Kody Kester – Aug 29, 2021 at 11:00AM

The pharmaceutical company's type 2 diabetes drug Jardiance was recently approved by the FDA for another indication.

Jardiance, a medication well-known for treatment of type 2 diabetes, now has another importance use. This past month, Eli Lilly (LLY 0.14%) and its German partner Boehringer Ingelheim announced that the U.S. Food and Drug Administration (FDA) had approved it for reducing the risk of hospitalization and death from systolic heart failure.

This could be good news for both patients and investors. Let's examine the data that led the FDA to reach this decision, what kind of revenue it could translate into for Jardiance, and what it means for Eli Lilly overall. 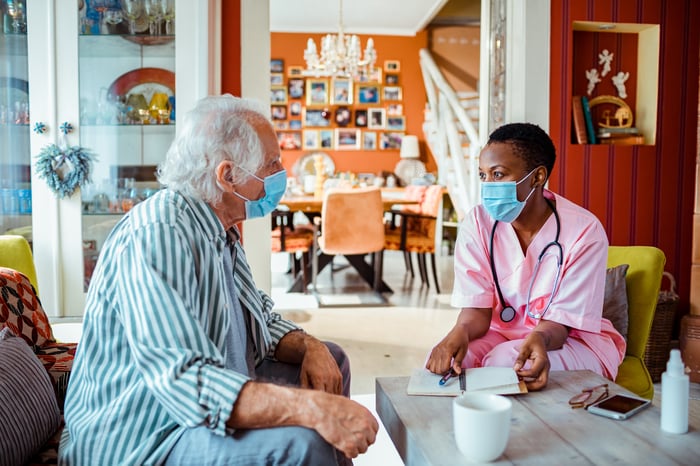 First, a few words about systolic heart failure, also known as heart failure with reduced ejection fraction (HFrEF). It is a condition where the left ventricle (the main pumping chamber of the heart) is unable to effectively push out enough blood to the rest of the body.

Now, let's look at the clinical trial that helped persuade the FDA. Of 3,730 systolic heart failure patients who enrolled, about half were randomly assigned to receive Jardiance while the remainder received a placebo. Over a 16-month period, Jardiance was found to have reduced the risk of cardiovascular death or heart failure hospitalization to 19.4% vs. 24.7% in those taking the placebo. This means that for every 19 patients treated with Jardiance, one extra patient was saved from cardiovascular death or heart failure hospitalization compared to the placebo.

By comparison, AstraZeneca's (AZN 0.06%) drug Farxiga needed to treat 21 patients for every one patient who was saved from cardiovascular death or heart failure hospitalization. Accounting for a slight difference in the trial periods, Jardiance and Farxiga were about equally effective.

With an estimated 5.7 million Americans suffering from heart failure, Jardiance and its efficacy in treating systolic heart failure could improve the quality of life for a great number of patients. So it's understandable why the FDA gave the go-ahead to Jardiance for its new indication.

Jardiance gets an infusion of growth

Jardiance has already been doing quite well as one of the top drugs in the massive and still-growing type 2 diabetes market. First-half 2021 revenue for the drug grew 26.3% year-over-year to $669 million. And now, it has received an extra boost with the FDA's approval for treatment of systolic heart failure.

Because Jardiance's efficacy is comparable to Farxiga's, I believe the drug will be able to capture market share with its new indication.

Americans living with heart failure account for nearly one-fourth of the world's 26 million people who are estimated to suffer from the condition -- and its dollar share of this market is likely even higher considering that the cost of treatment in the U.S. is the highest in the world.

Since this market is quite broad and includes implantable medical devices, artificial intelligence, wearable technologies, and drugs to improve heart failure outcomes, I believe Eli Lilly's Jardiance could carve out its own 2% share of that market.

This would equate to approximately $550 million in additional revenue for Eli Lilly's Jardiance in the U.S. market alone by 2027, which would be a huge boost to the drug given that its annualized sales for this year will be around $1.3 billion to $1.4 billion. It's noteworthy even compared to the roughly $27 billion in total revenue Eli Lilly is expecting this year.

Given that pharma stock Eli Lilly's drug portfolio is so much deeper than just Jardiance, I believe that analysts' estimates of 14.8% annual earnings growth over the next five years is realistic.

Consider that Eli Lilly's key oncology drug Verzenio posted 54% year-over-year revenue growth -- from $397 million in the first half of 2020 to $610 million in the first half of this year. Bernstein analyst Ronny Gal sees much more growth in Verzenio's future, potentially peaking at $4.6 billion in sales. This is due to both its steadily increasing market share in the metastatic breast cancer market and the possibility of FDA approval to treat early breast cancer.

At $260 a share, Eli Lilly trades at 33 times this year's average analyst earnings per share estimate of $7.90. Based on Eli Lilly's growth prospects, this valuation doesn't appear to be prohibitively expensive to justify nibbling on the stock and adding on any share price weakness in the future.