Please ensure Javascript is enabled for purposes of website accessibility
Log In Help Join The Motley Fool
Free Article Join Over 1 Million Premium Members And Get More In-Depth Stock Guidance and Research
By Kody Kester – Aug 17, 2021 at 7:22AM

The recent decision by the EMA to approve Forxiga for the treatment of chronic kidney disease is a huge boost for the pharmaceutical company.

Earlier this month, the European Medicines Agency (EMA) approved AstraZeneca's (AZN 0.70%) Forxiga for the treatment of patients in the EU with chronic kidney disease, or CKD. This is a label expansion for the drug, which was initially approved for diabetes back in 2012.

The approval comes just months after the U.S. Food and Drug Administration (FDA) approved Forxiga (known in the U.S. as Farxiga) for the same indication.

Let's dive into the results that prompted the EMA to approve Forxiga for CKD, both with and without type 2 diabetes -- and look at the potential revenue it could generate for large-cap pharma company AstraZeneca. 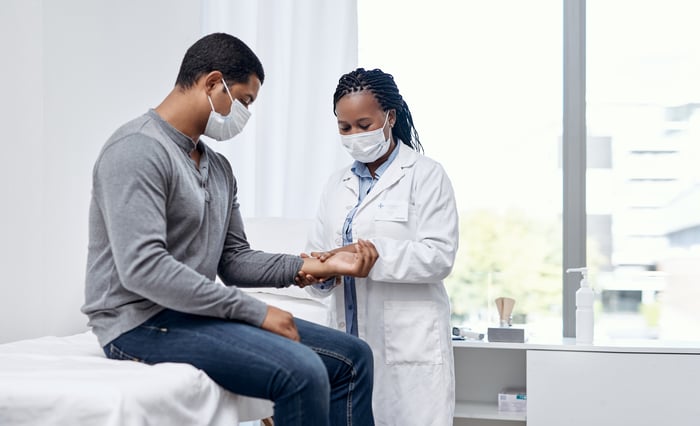 A breakthrough in the treatment of chronic kidney disease

Before discussing Forxiga's impact in treating CKD patients, it would be helpful to first define CKD and its levels of severity.

CKD affects the ability of the kidneys to filter waste and extra fluid out of the blood, which is an essential function of the body. Kidney function is often measured by the estimated glomerular filtration rate (eGFR). The higher the amounts of creatinine, urea, and other waste products in someone's blood, the lower their score on the eGFR. While a higher score is indicative of well-functioning kidneys, a lower score suggests ineffective and/or overworked kidneys.

According to Healthline, stage 1 CKD is characterized by an eGFR of at least 90%, and is often asymptomatic. Stage 2 consists of 60% to 89% kidney function and typically is accompanied by nonspecific symptoms, such as fatigue, itching, and loss of appetite. Stage 3 is 45% to 59% kidney functioning and sometimes comes with symptoms of back pain, swelling of the hands and feet, and weakness. Stage 4 is moderate to severe kidney damage, indicated by an eGFR of 15% to 29%; it can sometimes include the symptoms of stage 3 CKD, as well as nausea and vomiting. Stage 5 is referred to as end-stage CKD, is marked by an eGFR of less than 15%, and significantly increases the risk of heart disease and stroke.

The standard-of-care treatment has been an angiotensin-converting enzyme (ACE) inhibitor, which helps to lower blood pressure to reduce the chances of deteriorating kidney function. A phase 3 trial of Forxiga among CKD patients demonstrated that combining it with an ACE inhibitor led to a 39% reduction in the risk of worsening renal function, the onset of end-stage kidney disease, and renal death. This is a striking reduction, given that placebo reduced the risk of those outcomes by just 5.3%. What's more, Forxiga reduced the relative risk of death in CKD patients by 31% compared to placebo.

Now that we know the effectiveness of Forxiga in stopping or delaying the progress of CKD, we'll turn our attention to the potential market for the drug.

Even before the EMA's recent approval, the drug already had huge operating momentum. Forxiga managed to grow its first-half sales from $848 million in 2020 to $1.36 billion in 2021, an expansion of 60.3%. AstraZeneca noted in its recent press release that Forxiga benefited from growth in its drug class, as well as regulatory approvals in the U.S. (May 2020) and China (February 2021) for the treatment of a form of heart failure.

With an estimated 47 million people affected by CKD in the EU -- and given that 90% of those individuals are unaware that they have it -- the EMA's approval of Forxiga for this label expansion opens up a multibillion-dollar market. Assuming that Forxiga can capture 10% of the nearly 5 million diagnosed with CKD, this would be 500,000 new patients.

Patients in EU countries such as France, Germany, and Italy pay less than half on average for drugs than those in the U.S. (where Farxiga has an annual list price of about $6,000). Even if we consider an average net price of $2,000 annually per patient, Forxiga has a path to $1 billion in annual revenue in the next few years as it gains acceptance among doctors and patients in the EU -- a meaningful boost to the company's expected revenue base of $38 billion for next year.

In addition to Forxiga, AstraZeneca's three blockbuster oncology medicines -- Tagrisso, Imfinzi (which was recently approved for another indication in China), and Lynparza -- are continuing to show their growth potential. Total first-half sales from the drugs grew 25.3% year over year, from $3.79 billion in 2020 to $4.75 billion in 2021.

Analysts anticipate that AstraZeneca's oncology portfolio and enhanced orphan-drug portfolio after the completed acquisition of Alexion Pharmaceuticals will lead to 19% annual earnings growth over the next five years. Trading at just 17 times this year's earnings forecast of $3.33 per share and offering a 1.5% dividend yield that's a bit higher than the S&P 500's average, AstraZeneca offers a nice blend of value and growth.