There is a lot of smoke. Is there fire?

Occam's razor is a philosophical school of thinking that can be simplified as 'the most obvious explanation is most often the truth.' When a stock becomes the battleground of opinion between bulls and bears, the principle can come in handy. After all, the future is unknowable and you need a decision-making framework for when two groups of investors are each convinced something different will happen.

But when the facts themselves are in question, it's often a good idea simply to stay away, at least if you lack deep expertise in the subject matter. That's the case right now with Cassava Sciences (SAVA -1.09%). Here are a few reasons I think the obvious thing to do is avoid this controversial biotech. 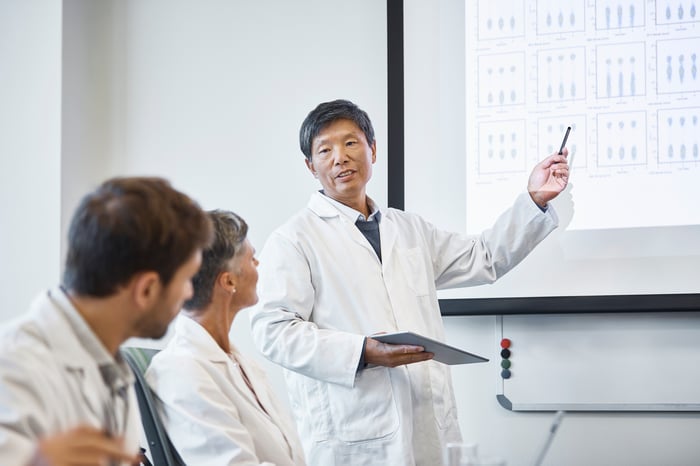 What's all the commotion about?

There's a lot of ground to cover with Cassava. The company has a potential drug called simufilam to treat Alzheimer's disease. Instead of taking the traditional route of treating the amyloid plaques in the brain, it is designed to restore the normal shape and function of a protein called filamin A. The hypothesis is that misshapen versions of this protein are a necessary condition for the plaques to form. Early results had Wall Street very excited, but it has been a roller-coaster ride.

The stock is up 1,770% over the past year, but controversy has driven it down 57% from the all-time high. In February, the company released results showing a 10% improvement in a test for cognition along with a 29% improvement in dementia-related behaviors. There were no safety concerns. In July, it released more data that the company claimed was positive. It sounds like great news, but it's an open-label study in which patients and doctors are aware of who is receiving treatment. Without a blind control arm, the Food and Drug Administration (FDA) considers these types of studies less reliable. That's because of the potential for a placebo effect -- a beneficial result attributed to patients' expectations rather than the drug itself. It's a well-known and long-accepted phenomenon.

That was the setup for late August when the FDA posted a whistleblower petition questioning the integrity of the clinical trials.  And it's turned the stock into a battleground. Now here's the caveat: The citizen petition was filed by law firm Labaton Sucharow, which said in an Aug. 26 press release that it represented clients who have short positions in Cassava Sciences.

There's a lot of smoke

The dust-up got the attention of Elisabeth Bik, a world-renowned microbiologist whose specialty is identifying falsified images in scientific papers. That can take the form of using images from other studies, copying parts of past images, rotating them, flipping them, and even digitally altering them. Her work has flagged publications in 49 countries and led to the correction of at least 300 papers and the retraction of more than 170. She's had a field day with Cassava's research.

She investigated three simufilam papers on the company's website and identified significant concerns with them. She also found issues with five other papers indirectly connected to the company, including some funded by the company's senior vice president of neuroscience. Bik meticulously lays out her work on her website.

Hoau-Yan Wang, a member of Cassava's scientific advisory board and an associate professor at the City University of New York, published the company's three primary papers. Overall, the questions cover research spanning 15 years.

As you would expect, management strongly denied the claims. To show its results were independent, it highlighted research Quanterix presented at a recent conference. But Quanterix issued a statement clarifying its role: It only performed testing on blinded samples and was not involved in interpreting the results or preparing data and charts for the conference. It wasn't a good look for the company.

The fact that Bik is questioning the validity of the images doesn't mean the researchers committed fraud. That's why Bik doesn't make accusations. She only points out what she finds. Images can accidentally be uploaded multiple times, or old equipment can leave the same residual markings every time it's used. Bik co-wrote a 2016 study of more than 20,000 biomedical papers showing that about 4% of them contained troublesome images.

She is also not the whistleblower who filed the complaint. Management has called the petition to the FDA a "well-coordinated sneak attack." Regardless, Cassava is slated to begin a six-month phase 3 trial in the second half of this year. The CEO has also reiterated that no holds have been placed on studies and he isn't aware of any investigations. Bulls can point to that as the key in settling the issue once and for all.

But independent Alzheimer's researchers have inspected the data and gone so far as to call the company's claims "overblown." Adding to the skepticism is that some of the benefits were lower at nine months than at six months. That bolsters the idea that the placebo effect might be the reason for previously observed improvements.

As for the claim of manipulation, the company issued a lengthy response in a fact-vs.-fiction format. However, the very first "fact" pointed out that Quanterix generated the data presented at the recent conference. Strike one. Then management cites that it wouldn't make sense to manipulate control data since it doesn't change the end data. I'm not an expert in Alzheimer's research, but the statement appears to contradict the basic scientific method. Results are meaningful only by comparing them to control data. And if control data was manipulated -- and I'm not claiming it was -- then any end data is virtually meaningless. Details aside, it's a strange claim for the company to make to defend itself.

As an investor who adheres to Occam's razor, I'm steering clear. The FDA hasn't hinted at the merits of the whistleblower complaint. How the questions are ultimately answered is anyone's guess. I know what makes the most sense to me. That's why I don't think Cassava's stock is worth the risk.