Even with more records for market benchmarks, not every stock participated in the rally.

The stock market generally continued to move higher on Monday, buoyed by strong sentiment that the higher-growth area of the economy would continue to thrive. That helps explain why the Dow Jones Industrial Average (^DJI -0.90%) missed out, with financial stocks weighing on the average, but the the S&P 500 (^GSPC -0.73%) and Nasdaq Composite (^IXIC -0.70%) reached new record highs.

Yet some big names made large moves lower in after-hours trading, as earnings season continued to deal out some surprises. Zoom Video Communications (ZM -0.28%) and StoneCo (STNE -4.09%) have fallen substantially from their highest levels of the past year, and even their latest financial results weren't able to generate much hope for an imminent rebound for the stocks.

Zoom Video Communications saw its stock drop nearly 11% after the end of regular trading on Monday. The video platform has continued to grow, but not at the pace that overly optimistic shareholders had anticipated this time last year.

By most standards, Zoom's business continued to do well. Second-quarter revenue rose 54% year over year, topping $1 billion for the first time. Adjusted net income came in 48% higher from the year-ago quarter, at $1.36 per share. Free cash flow was up 22% to $455 million. 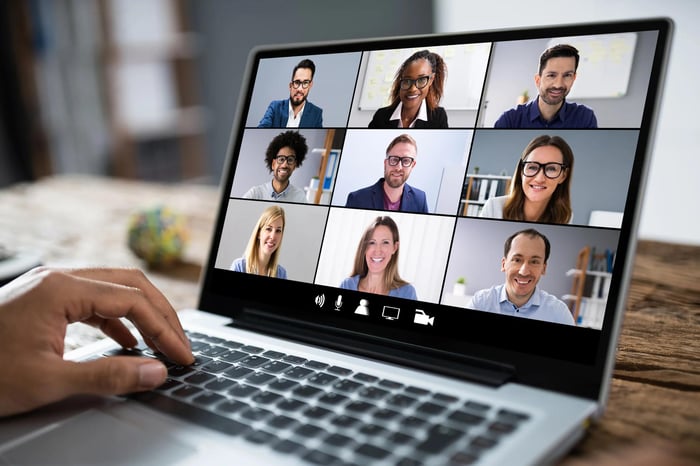 Moreover, Zoom's business metrics looked solid. The company had 2,278 customers contributing $100,000 or more to its annual revenue, well over double its big-client count from a year ago. Customers with more than 10 employees vaulted over the half-million mark, up 36% year over year. Net dollar expansion rates remained above 130% on a trailing-12-month basis.

But investors weren't pleased to see Zoom calling for roughly flat revenue for the third quarter compared to the second quarter. Moreover, management predicted its adjusted earnings could actually fall on a quarter-over-quarter basis.

Zoom has traded at a premium valuation for a long time, and investors have expected even sharper growth than this. That explains the after-hours drop for the stock even in the wake of a healthy business report.

Shares of StoneCo were down less sharply, falling about 3% in after-hours trading after a 4% decline in the regular session. The Brazilian fintech company's second-quarter financial results similarly failed to impress investors despite a solid showing.

The business looked strong. The number of small and midsize businesses using StoneCo's platform climbed above the 1 million mark, and total payment volume more than doubled year over year. The company's TON product has also attracted a lot of business, as the micro-merchant service added 140,000 new clients in just the past three months. All told, those figures helped StoneCo boost revenue by 68% from this time last year.

But it did run into some execution mistakes, and that led to the company making a temporary halt to extending credit and boosting its loss reserves. Moreover, StoneCo thinks it could take three to six months before it can resume operations as normal.

Even with the setback, the company is optimistic about its acquisition of software company Linx. The purchase should bolster StoneCo's overall value proposition and brings access to data that the company hopes to use to cross-sell joint customers. Nevertheless, challenges might keep the stock price down until the company can prove it's moving back in the right direction again.