Neither of them needs to sell marijuana to consumers to succeed.

As different as they may seem, there's some overlap between the cannabis industry and biotech that's worth understanding as an investor. Cultivators can use biotechnology to manipulate the genes of marijuana plants to increase their yield, and biotechs can use the bioactive chemicals contained in cannabis as jumping-off points for drug development efforts.

Both of the companies I'll analyze today conduct their business within these overlapping regions. And, if their efforts continue to pan out as planned, they'll be valuable stocks to own, especially as the biotech sector becomes more sophisticated and as the cannabis industry scales to match global demand. 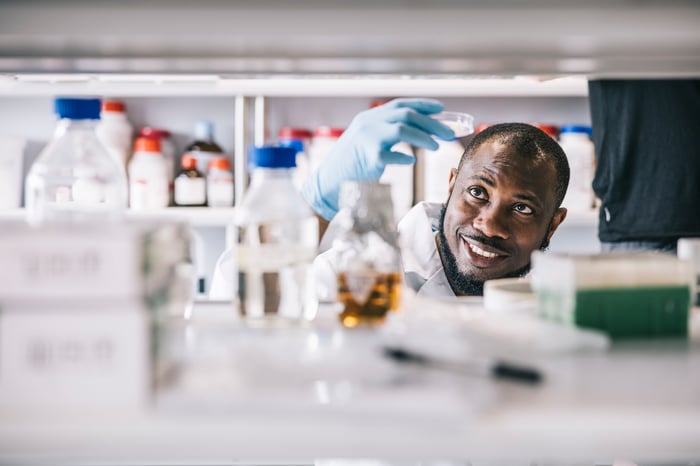 Jazz Pharmaceuticals (JAZZ 0.81%) is pushing forward with cannabis-derived medicines for rare diseases, and it's gaining momentum rapidly. On Aug. 10, its epilepsy drug, Epidiolex, received an expanded indication in the U.K. for seizures stemming from a rare disease called tuberous sclerosis complex, which followed a similar approval in the U.S. The new indication is the fourth for Epidiolex, which is a prescription-only formulation of the chemical cannabidiol (CBD), a non-psychoactive component of cannabis.

Epidiolex revenue is ramping up sharply; sales rose by 32% year over year in Q2 to reach $155.9 million. The company is already angling for a fifth indication, with a phase 3 study examining the drug's merit for myoclonic-atonic seizures (a rare form of epilepsy) set for the first half of 2022.

But there's more to Jazz's cannabinoid pipeline than cannabidiol. Aside from its undisclosed programs, it has several other clinical-stage projects investigating the cannabinoid mixture called nabiximols for conditions like multiple sclerosis (MS) spasticity, schizophrenia, and post-traumatic stress disorder (PTSD). One common trend among these disorders is that they're hard to treat, and the currently existing medicines aren't that effective.

So, if Jazz's candidates can succeed where other therapies have failed, it'll be able to claim a market-leading position relatively easily, and that's exciting. And even if Jazz's programs aren't knockouts, they could still capture some market share by being used as adjunct treatments on top of the existing solutions.

Of course, Jazz is a relative newcomer to the cannabis therapeutics space. Before its acquisition of GW Pharmaceuticals, where most of its cannabinoid pipeline originated, the company developed a handful of drugs for applications in oncology and neurology. In fact, its oncology portfolio alone is slated to make Jazz as much as $835 million in revenue during 2021, destroying 2020's record of $554 million. So, there's a lot more to this stock than its lucrative cannabinoid medicines, and that's one more reason why it's worth a purchase.

Helping other businesses make more money is an effective and time-tested strategy, and that's exactly what 22nd Century Group (XXII 3.51%) does with its cannabis genetics platform. By modifying the genes of marijuana plants, the company increases their yield of valuable cannabinoid chemicals.

That's a hotly desired capability among cannabis growers, as it helps them to get more out of their limited cultivation space without increasing the required labor or cultivation footprint. And if the growers want to increase their plants' production of specific cannabinoids and suppress others, 22nd Century can do that too, thereby opening the door for a smattering of new product differentiation opportunities.

First, marijuana pure-play companies tend to struggle with profitability. This is caused in part by fluctuations in the fair-market value of marijuana and the associated cannabinoid chemicals, which require processing to extract. Increasing cannabinoid yields could be a major part of the solution to that problem, as less plant matter would be needed to generate the same quantity of cannabinoids.

Second, global demand for marijuana is increasing alongside progress with legalization. Serving that demand at scale is a challenge that competitors are going to need to address by increasing their output. But overbuilding of output capacity relative to demand is another one of the industry's ongoing issues. Companies won't need to spin up as much new cultivation space to keep up with demand if they can count on higher yields.

In sum, 22nd Century's services will be in demand from large and small marijuana cultivators alike. If everything goes according to plan, the company will also start to register an increasing amount of revenue from licensing its genetics technologies throughout 2021 and beyond, putting it on the path to profitability. Furthermore, it could experience rising demand for the relatively small amounts of cannabis biomass and cannabinoid distillates that it produces in-house.  While it's true that cannabis companies don't need its help to succeed, they can score a major edge if they do, and that's what makes this stock worth buying.

This Exciting Growth Sector Is Predicted to Keep Doubling Until 2028