Investors have been selling off the stock since the company released its earnings report earlier this month.

Jazz Pharmaceuticals (JAZZ 0.45%) is a cross between a pharmaceutical stock and a cannabis stock. In its earlier life, it was a pharmaceutical company that was chugging along and posting some good numbers. But after it acquired GW Pharmaceuticals earlier this year, that changed. Now that it owns the only cannabis-based drug (Epidiolex) that the U.S. Food and Drug Administration has approved, it has become an even more attractive growth stock with tremendous upside.

While investors weren't pleased with the company's recent earnings report, which sent shares off a cliff, there's plenty of reason to remain bullish on the stock. And given that shares of Jazz are trading at the lowest price they've fetched all year, now may be a great time to consider buying it. 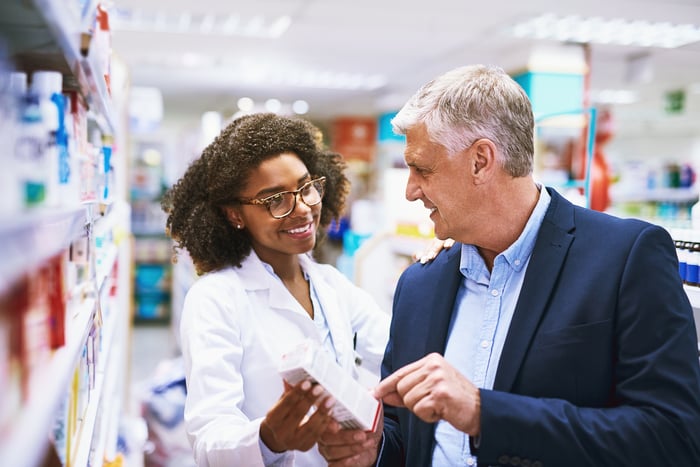 The company's earnings report was marred by acquisition-related expenses

At first glance, Jazz's second-quarter earnings report didn't look terribly good. For the period ending June 30, the company's net loss of $6.11 per share was awful, especially when compared with the per-share diluted profit of $2.07 that it reported in the prior-year quarter. However, a closer look at the earnings release found some significant items that contributed to the abysmal bottom line:

Although I'm not a fan of adjusted earnings numbers, in this situation -- given the amount of noise in the company's financials -- they appear justified. And in Q2, Jazz reported adjusted earnings per share of $3.90 -- higher than the $3.71-per-share adjusted profit it reported a year ago.

This suggests the numbers really were atypical and may not be recurring. And there were definitely some positives for investors to take away from the earnings report.

New drugs are contributing, and more growth opportunities could be on the way

Revenue of $751.8 million for the quarter was up 34% from the same period last year as the company got a boost from its cancer-fighting drug Zepzelca, which launched in July 2020. It contributed $55.9 million to the top line this past quarter (versus nothing a year ago). The FDA gave the drug the green light last year under an accelerated approval, and Jazz is planning multiple trials including a confirmatory trial for small-cell lung cancer.

The company also benefited from $109.5 million in revenue from Epidiolex (and that didn't even encompass a full quarter of revenue, as the transaction to acquire GW Pharma closed on May 5). On a pro forma basis, Jazz estimates Epidiolex's sales grew 32% year over year. Epidiolex is approved by the FDA to treat multiple indications related to seizures, including Lennox-Gastaut syndrome, Dravet syndrome, and tuberous sclerosis complex. However, Jazz is also planning to start phase 3 trials for a new indication (epilepsy with myclonic-atonic seizures) next year.

Is the stock a bargain?

It is currently trading at a forward price-to-earnings ratio of 10. That's not a terribly high multiple to pay given that many cannabis and pharmaceutical stocks aren't profitable. And compared with some of the bigger names in the pharma industry, the stock definitely falls on the cheaper side: 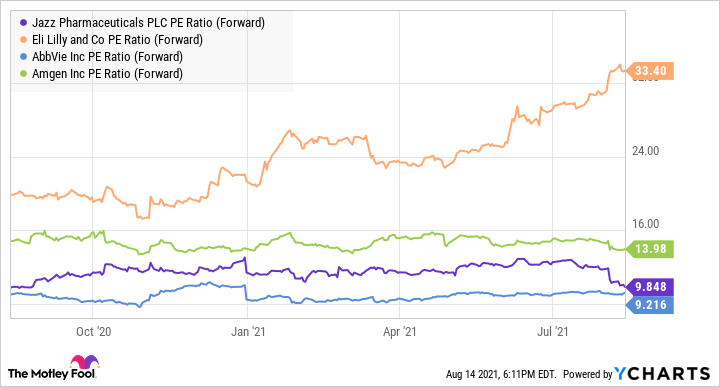 As a healthcare investment with significant upside in the cannabis sector, Jazz could be a great buy. Multiple analysts have set price targets of more than $200 for the stock, which would suggest an upside of at least 40% if you were to buy it at $140 or lower.

Should you buy Jazz Pharmaceuticals stock?

The global cannabis pharmaceuticals segment could be one of the most promising investment opportunities available today, with Grand View Research predicting that the space will grow at a staggering compound annual growth rate of 76.8% between now and 2027, reaching a value of $5.8 billion. It's a segment that could see lots more growth once federal marijuana reform in the U.S. takes place, which may not be too far away.

Jazz is a good stock with strong fundamentals. Although it is coming off a bad quarter, it has typically been a safe bet to post a profit in the past. And tapping into the cannabis market could unlock even more potential for the business in the long term. Whether you're a cannabis investor or looking for a promising growth opportunity, Jazz could be your ticket to some great long-term returns -- without having to take on too much risk.

This Exciting Growth Sector Is Predicted to Keep Doubling Until 2028