There are no sleepy summers in the world of Walt Disney (NYSE:DIS). The media giant is always on the move, and the month ahead won't be any different.

A new Marvel movie, the return of annual passes to Disney World, and more will keep the House of Mouse on its toes. Let's go over three of the dates that will matter for the industry bellwether in September. 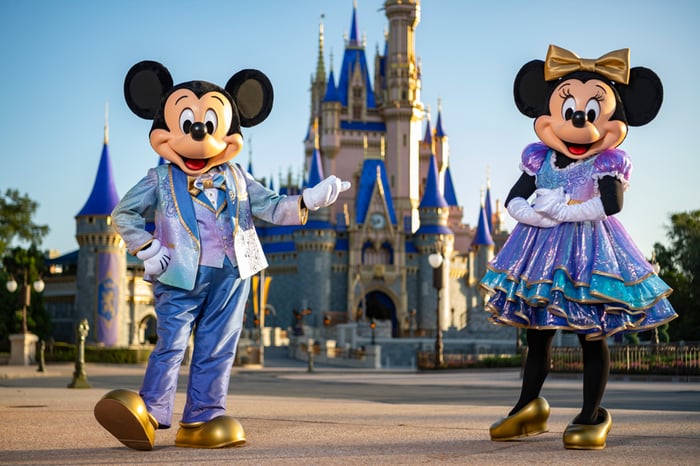 Disney already has this year's top U.S. box-office draw with Black Widow. This weekend it hits theaters with its next Marvel release. Shang Chi and the Legend of the Ten Rings isn't a slam dunk like the more popular Black Widow franchise, but things could get interesting.

It should dominate the Labor Day holiday weekend. However, there's more to watch here: Unlike the Scarlett Johansson flick that was available as a premium rental through Premier Access on Disney+, Shang Chi will play exclusively at a multiplex near you for the first 45 days.

This wasn't Disney's call. Shang Chi and the Legend of the Ten Rings joins recent theatrical release Free Guy as movies that Disney inherited when it acquired key Twenty-First Century Fox assets, and both are tied to terms dictating release windows. If these films wind up doing better than some of the more high-profile releases with day-and-date streaming access, they could force studios to rethink their distribution strategy.

Disney stopped selling new annual passes in the wake of the pandemic last year, but passes are coming back next week. Theme-park enthusiasts have mixed feelings about the makeover: Annual passes are more expensive now that a lot of previously included perks have become premium add-on options.

The timing of the passes' return is a bit surprising. Disney World is about to celebrate 50 years of existence, in a massive celebration that starts in October and runs all the way through the springtime of 2023. One might think that Disney wouldn't need annual passes when Disney World is going to be a huge tourist draw. However, with global travel restrictions in place -- and new passes that are heavy on blockout dates during peak travel periods -- the move should work.

The cadence of new content popping onto Disney+ is picking up these days. One of the more interesting properties coming to the fast-growing streaming platform this month is Star Wars: Visions.

This won't be a live-action tweak of the Star Wars franchise like the wildly popular The Mandalorian. Disney turned to leading Japanese anime studios to create a series of nine animated shorts inspired by the iconic Lucasfilm property, and all of those episodes will hit Disney+ on Sept. 22. That may seem like a low-stakes play, but given the wide Star Wars fan base, it wouldn't be a surprise if one or two of these anime shorts wind up inspiring more content within those realms.

With the Disney+ audience growing and so many properties at disposal of the world's top entertainment stock, you can expect content to keep coming. Disney+ increased its rates earlier this year, and being able to divide programming costs across a widening revenue base can do big things to a content catalog.