The delta variant has people rushing to get in line, and not just for a third wave of shots.

At the beginning of summer, businesses were reopening and mask-wearing restrictions were being reduced. Then along came the delta variant of the coronavirus, and with it new medical knowledge supporting the idea of making booster shots available to further strengthen immunity against COVID-19.

The emergence and spread of the delta variant has led many to return to wearing masks. Logistics are being worked out to make sure boosters will be available by Sept. 20, a date set by the federal government, and resources including personal care providers and local pharmacies are lining up to administer the shots. The availability of boosters is leading people to book appointments, and may lead to much more than that for CVS Health (CVS -0.80%) and Walgreens Boots Alliance (WBA -1.50%). 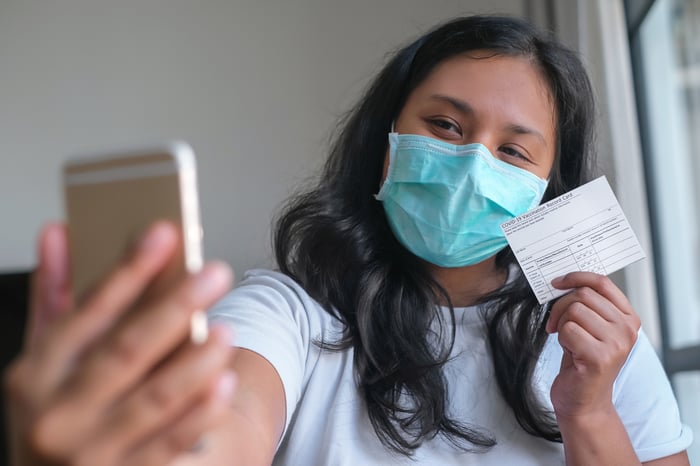 In the U.S., 173 million people have been fully vaccinated to date for COVID-19. People who have already received their first two doses (or their single dose in the case of the Johnson & Johnson vaccine) are now being advised to schedule a booster approximately eight months after the second dose was administered.

The available vaccines have been shown to be effective at preventing severe illness and hospitalization among those who have received the shots, but the CDC does note that over time, vaccinated persons could experience a reduction in the effectiveness, making them vulnerable to the delta variant.

On Aug. 18, President Joe Biden announced that COVID-19 booster shots from Pfizer and Moderna would be made available, though not mandatory, beginning Sept. 20. Both CVS and Walgreens immediately began taking appointments for shots. In some cases involving immunocompromised people, booster shots are already being provided.

But with the growing demand for booster appointments, there is also an uptick in demand for initial vaccinations. Walgreens has seen a 30% rise in demand for first-time vaccinations over the past few weeks, with the overall U.S. average picking up by 20% during the same time frame. For Walgreens, the increase was mostly driven by closures of government-run mass vaccination sites because of what had been a decrease in demand.

Some businesses have now started to make vaccinations mandatory, including not just 130 health systems such as Kaiser Permanente but also entertainment venues such as Walt Disney World. There, "cast members" are getting mandatory vaccinations in anticipation of the resort's 50th anniversary celebrations this October -- one way to help make sure it continues to be the "happiest place on earth."

Other large corporations, including Microsoft and Alphabet's Google, are also implementing vaccination requirements.

The impact on pharmacies

Under the American Rescue Plan Act, effective March 11, vaccine administration is fully funded by the federal government. Providers, including CVS and Walgreens, will be reimbursed for the cost of administering the shots. This means the providers are prohibited from charging patients for them; instead, they may bill Medicare, Medicaid, and private insurers for the cost of administering COVID-19 vaccines.

In March, the Centers for Medicare & Medicaid Services increased reimbursement rates for providers. The new rates jumped from $28 to $40 per dose, and from $45 to $80 when vaccination requires two doses, which should lead to more revenue for providers on a per-dose basis.

The increase in demand for vaccinations and testing, along with appointments for pending booster shots, has additional positive benefits for pharmacies. Not only do the pharmacies get walk-in customers, they also get access to consumer data used for keeping accurate records and making sure only qualified people are getting the shots. Pharmacies can then use that data in marketing outreach campaigns, which can ultimately lead to greater revenue from new and repeat business, including prescriptions and retail sales.

According to The Wall Street Journal, CVS executives say that 8 million people who have come in to its pharmacies for coronavirus tests had not received a prescription from the business in the past year, which provides the company with a large set of potential new customers.

In the second quarter of this year, CVS showed strong prescription revenue growth of 14%, driven by new customers. Twelve percent of those new customers came by way of COVID-19 testing, and subsequently chose to fill prescriptions at CVS. COVID-19 vaccine administration acted as a catalyst for increased pharmacy services revenue, resulting in 25% of the total pharmacy claims for the quarter.

Those numbers helped lead to an increase in revenue of $3 billion year over year for CVS, with one-third of that a result of administering 17 million COVID-19 vaccines and 6 million tests. During the second-quarter earnings call, management provided increased overall guidance but noted that it expected the pandemic to be a modest negative for 2021 due to a reduction in vaccine numbers. That call took place two weeks before President Biden suggested booster shots for already vaccinated people, which should give investors some hope that the modest negative could turn into a positive for the company before the year is out.

Meanwhile, management at Walgreens said that for their recent fiscal 2021 third quarter, ended May 31, comparable-pharmacy sales in the U.S. grew by 8.4% over the same period last year. This was led by a 9.8% increase in prescriptions, and the company administered a total of 17 million vaccinations, the same total as CVS.

The company raised its full-year guidance for earnings to 10% growth. This is up from a previous 7% to 9% range, and the new projection also takes into account higher selling, general, and administrative expenses related to overhead for administering vaccinations as well as one-time items including bonus payouts. Without these offsetting expenses, the company said the earnings would equate to somewhere in the neighborhood of 27% growth.

CVS and Walgreens both have the potential for a boost in revenue with the availability of COVID-19 booster shots and the noted uptick in first-time vaccinations. Businesses making vaccinations mandatory for employees adds to that potential. The first signs of this revenue growth should come in late September with any news of the number of people getting booster shots.

The average analyst rating on CVS stock is a buy with a potential 18% price target premium to the current share price, while Walgreens' average rating is a hold, but still has a target 12% above the current price. With news on the horizon that could provide added revenue, the question for some investors might be, should I buy now or wait?

For an answer, it might be best to take a long-term approach, in which case both companies have excellent potential. For the more conservative investor, CVS raised its guidance during the last earnings call and is approaching a 52-week high, with analysts targeting more gains over the next 12 months than for Walgreens, which make it more of a "now" pick. Meanwhile, those interested in Walgreens might want to wait on the next earnings call to see whether its recent rebound can continue. Especially if the company is able to achieve its raised full-year guidance of 10% growth after a five-year downward tend in stock price, Walgreens offers a more opportunistic investor the chance to buy a Dividend Aristocrat on the dip.