Please ensure Javascript is enabled for purposes of website accessibility
Log In Help Join The Motley Fool
Free Article Join Over 1 Million Premium Members And Get More In-Depth Stock Guidance and Research
By Alex Carchidi – Sep 2, 2021 at 6:18AM

There's more good news on the way for these two coronavirus vaccine developers.

To say that Moderna (MRNA -0.23%) and BioNTech (BNTX -0.88%) investors have had a great year would be an understatement. The two stocks have gained around 265% and 340%, respectively, year to date. Demand for the companies' coronavirus vaccines has led investors to bid the shares up.

It's no surprise that the two COVID-19 vaccine victors are drinking deeply from a firehose of revenue, but you might be interested to hear that their fortunes will probably improve even further thanks to a few new developments in the public health response to the pandemic. Let's examine why Moderna and BioNTech are on track to be even more lucrative stocks to own at the end of this year than they were at the start. 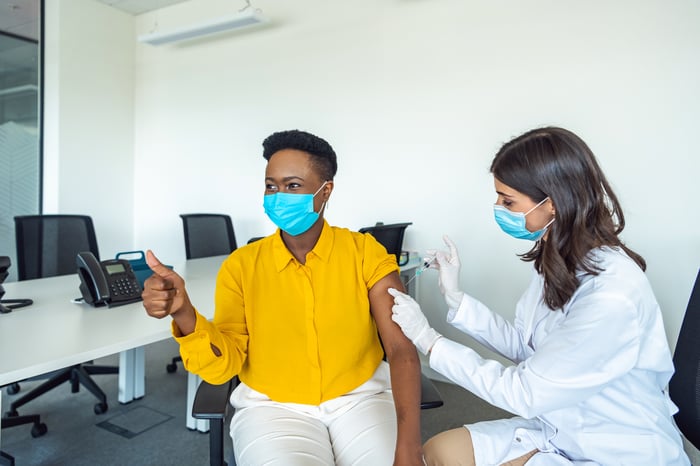 With booster shots becoming part of the standard vaccination regimen for SARS-CoV-2, there are a few key implications for shareholders in the two vaccine specialists.

First, assuming that each dose is sold for the same price and that every person needs three doses within a year, the vaccine makers can now expect around 33% more revenue per vaccinated person. As vaccine distribution reaches more and more corners of the globe, that'll result in significantly higher sales than previously estimated. Plus, the possibility of mixing and matching doses from different manufacturers means that there's an opportunity for BioNTech and Moderna to steal market share from competitors with less effective vaccines, like Johnson & Johnson.

Second, the door is now wide open for additional booster jabs beyond the third dose. If a booster dose becomes a yearly feature for people to maintain their immunity against the latest variants, it'll be a major boon for shareholders. But there's a lot of scientific and clinical research that will need to happen before manufacturers can establish that additional shots will be needed in the future (not to mention even more regulatory hurdles).

Finally, when federal public health authorities at the U.S. Food and Drug Administration and the Centers for Disease Control and Prevention agreed to administering booster vaccines in principle, it was an important about-face that repudiated their previous advisories. That's actually a good thing, because it means that they were willing to change their minds when they saw new evidence that contradicted their point of view.

So, it's looking slightly more hopeful that regulators will be open to accelerating the approval process for fresh versions of approved vaccines that are intended to counter emerging viral variants (fingers crossed). A faster process for variant-specific booster shots could trim some of the costs associated with regulatory filings, as well. 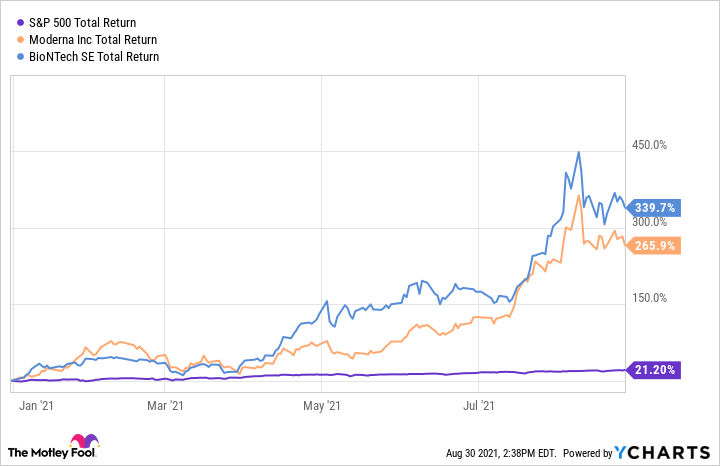 Vaccines for kids are up next

As though the additional revenue from booster shots isn't positive enough, before the end of the year, regulators are expected to approve jabs for children under 12. The growing public and medical consensus is that the coronavirus is dangerous for children, too, so it's important to vaccinate them.

It's likely that the approval for the population under age 12 will occur in phases as evidence is collected from younger and younger groups, with the approvals for age 5 and under taking a bit longer.

Still, questions remain about how vaccination for younger age groups will be dosed and priced. If doses are smaller in volume but sold for the same price, they would be higher-margin products than the shots for adults. Nonetheless, the new revenue will be substantial, and at the moment it looks like Pfizer and BioNTech are positioned to be the first to get regulatory approval.

The story isn't over yet

If the discussions about booster shots and expanding the vaccine to younger age groups didn't make it clear enough, I regret to inform you that we may still have a ways to go before the coronavirus is less threatening. As a result, we'll be relying on vaccine makers to do their best for at least a couple more years. And if things keep going roughly as they have so far, there will be another wrench like the delta variant mucking up the works between now and then.

In other words, it isn't too late to buy these three stocks!

In my view, there are no concrete threats that might cause their value to collapse anytime soon. Even if valuations start to become stretched -- and Moderna's definitely is -- these companies have in-demand products that they are constantly innovating on. And as the crisis continues to evolve, so will their potential to make future revenue by addressing the public's need for a vaccine.