Though there's no robot yet, the "unveiling" may still serve a practical purpose.

During the AI Day event of electric automaker Tesla (TSLA 7.67%), the company's maverick CEO Elon Musk revealed a new product concept, the "Tesla Bot." A humanoid robot or android, the robot was represented by a Tesla employee wearing a tight full-body jumpsuit who cavorted and pranced about onstage to the accompaniment of a rhythmic techno soundtrack, followed by remarks from Musk. Though the display appeared strange, it served at least some purpose for Tesla that you may not have considered.

The meaning of the Tesla Bot

After using the company AI Day to discuss the artificial intelligence used in the Tesla vehicle Autopilot, and the Dojo supercomputer intended to "educate" the Autopilot in successfully identifying the hazards of metropolitan streets, Musk presented the Bot and said it will operate using the same systems. The Bot was presented as "What's Next for AI Beyond Our Vehicle Fleet."

Musk said, regarding the neural net navigation system the company is designing, "it kind of makes sense to put that onto a humanoid form." He added, "We think we'll probably have a prototype sometime next year, that basically looks like this, and it's intended to be friendly, of course, and navigate through a world built for humans, and eliminate dangerous, repetitive, and boring tasks." 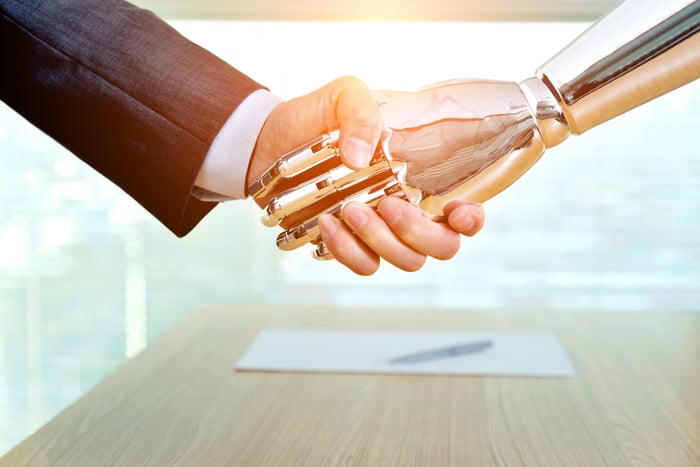 Tesla's producing a humanoid robot capable of taking over most labor tasks, shopping for groceries, and acting as a servant is years away from happening at best, but it is another in a long series of similar pronouncements by Elon Musk. These have included "predictions" of satellite internet availability over the whole planetary surface, implantable health-related microchips, and "millions" of robotic taxis on America's roads. The dates of Musk's "predictions" have come and gone without the innovations' actually materializing.

Wedbush Securities weighed in on the Tesla Bot "reveal," with its analyst Dan Ives writing, "We view this Tesla Bot as an absolute head scratcher that will further agitate investors at a time...[of] rising EV competition and safety issues for Tesla."

Musk's Tesla Bot digression may not be as puzzling as it first looks, though. Publicity stunts such as the Tesla Bot announcement or flirting with cryptocurrency Dogecoin (DOGE -2.47%) are perhaps Elon Musk's primary method of advertising, keeping Tesla in the news, and generating conversation in the media and online. If this is indeed the purpose of these announcements, the strategy appears successful, given that Tesla still has many more orders than it can actually fill with its existing manufacturing capacity, while Musk's outlandish predictions -- which often seem at least half tongue-in-cheek -- continue to provide free advertising by stirring up a buzz in the press.

Elon Musk's Tesla Bot announcement is "a riddle, wrapped in a mystery, inside an enigma" at this point. It could be a serious declaration of intent to produce a humanoid robot. It could be cover for some other project or product improvement Musk has in mind. It could be a project Tesla will attempt, but regardless of outcome, it still also helps to create a stir in the news and focus attention on the company, making the announcement a mix of serious planning (though with an uncertain outcome) and showmanship. Or it might be simply a tongue-in-cheek display to catch people's interest.

Regardless of Musk's intentions, one thing that can't be doubted is the Tesla Bot "unveiling" drew attention and generated chatter in the news about this star performer among electric car stocks. Some investors may find this and similar performances off-putting, but the event arguably shows Elon Musk still has the power to perplex and intrigue the media, investors, and the fans of his vehicles without any advertising budget -- the winning strategy that has kept Tesla at the front of the pack for years despite countless naysayers predicting its imminent doom along the way.