Please ensure Javascript is enabled for purposes of website accessibility
Log In Help Join The Motley Fool
Free Article Join Over 1 Million Premium Members And Get More In-Depth Stock Guidance and Research
By Daniel Sparks – Updated Sep 3, 2021 at 9:49AM

Management says there are good reasons behind some fiscal fourth-quarter metrics that may have spooked investors.

Following its fiscal fourth-quarter earnings report late last month, Peloton Interactive (PTON 0.30%) shares have been slammed. Shares of the connected fitness company are down more than 12% since it reported earnings. Investors are wondering if price cuts, higher churn, and slower growth are red flags for the growth stock or rather developments with straightforward and reasonable explanations.

While management is obviously biased, it's still useful to check on what they are saying in case investors are missing key elements to the company's growth story. Here are three must-see excerpts from the company's fiscal fourth-quarter earnings call to help investors better understand the company's current situation. 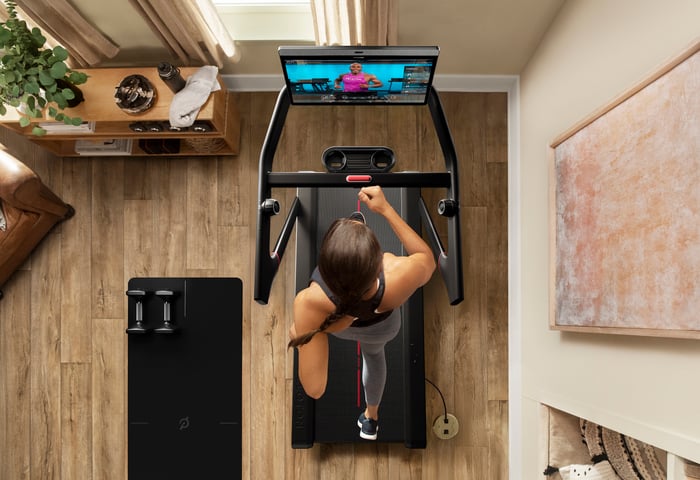 1. Churn was actually better than expected

One potential key metric that spooked some investors during the call was a churn rate that more than doubled compared to the prior quarter. The company's average net monthly connected fitness churn, a measure of connected fitness subscription cancellations (net of reactivations) as a percentage of users each month, was 0.73% in fiscal Q4. This compares to 0.31% just three months earlier.

This metric, which does not include data related to its members who use its content library with their own devices and thus measures the churn of subscribers using the company's connected Peloton products, helps investors gauge how successful the company is at engaging its users. While it was double what it was three months earlier, it was notably still impressive: less than 1% churn on a fitness bike! Additionally, management noted that the figure was actually better than it expected.

"Despite typical seasonality and increased consumer mobility, average net monthly connected fitness churn was ... better than anticipated," said Peloton CFO Jill Woodworth during the earnings call. Improved weather and a reopening economy simply had people out and about.

I'm giving management's explanation an A+ on this one. We probably all have anecdotal evidence of people getting out and about more than they were during the beginning of the year to take advantage of warmer weather and a reopening economy.

2. What about that big price cut?

When asked about the newly rolled out 20% price cut to its more affordable Peloton Bike, management said this was an offensive move -- not a defensive one.

Investments in its supply chain are bearing fruit in higher-volume manufacturing, enabling the company to try to reach a wider audience in higher quantities. Of course, it will also help the company bring its lucrative subscription to more customers and potentially benefit from greater lifetime gross profit.

"[W]e think it's the right thing for our business, obviously, solving for net new sub adds," explained Peloton co-founder and CEO John Foley, "which was kind of our True North of getting more people into the tent and thinking about the [lifetime value] of those users."

While this explanation certainly sounds reasonable, investors will need more time to see if the strategy makes sense. For that reason, management gets a B (for now) for this explanation. 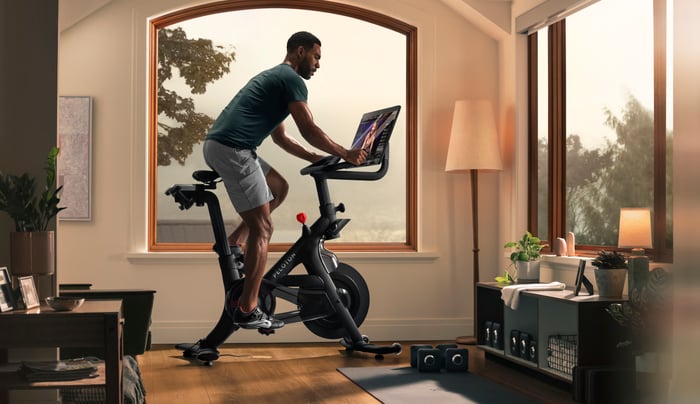 3. Zoom out before you point fingers at Peloton's slowing growth

Finally, there's the company's can't-miss slowdown in top-line growth. Management guided for just 6% year-over-year revenue growth in the fiscal first quarter -- down from 54% this quarter and 141% last quarter. But as management points out, the company is now lapping "a very unusual year in which both supply and demand shocks impacted our performance."

For this reason, investors should zoom out and look at the company's growth trajectory on a two-year basis. Management's guidance for fiscal first-quarter revenue of about $800 million impressively represents an 80% compound average annual growth rate compared to revenue in the same period two years ago. Revenue during the first quarter of fiscal 2020 (a three-month period that ended on Sept. 30, 2019) was just $228 million.

Management gets a B+ for its explanation of slowing growth. While there's a straightforward excuse for the deceleration, investors should still keep an eye on growth rates, hoping for a reacceleration as the company starts lapping more normalized comparisons toward the end of fiscal 2022.

Overall, it's safe to say that Wall Street could be overreacting to metrics that drive negative headlines and pessimistic takeaways on the surface but actually have some reasonable explanations. The future could be challenging for Peloton -- and maybe the company's growth story will wane -- but we'll need more time to judge whether this is the case. There's also a chance these are still very early days for Peloton.