Should a cyclical industrial stock get a premium valuation in today's market? Investors seem to think so.

Shares of Caterpillar (CAT 0.32%) are down 14.3% from their all-time high earlier this year, despite impressive growth numbers coming out of the depths of the pandemic. Second-quarter revenue jumped 29% versus a year ago, and the company reported a profit of $2.56 per share, despite raw material and transportation headwinds.

Results seem impressive on the surface, but investors didn't like what they saw. Is this a new buying opportunity for long-term shareholders, or is the best behind this giant industrial stock? 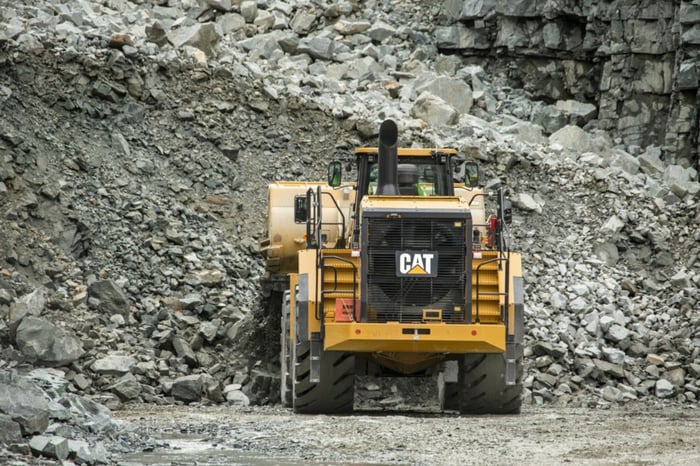 I think it's important to start with a long-term view of Caterpillar's business. Below, you can see that Caterpillar's operating history is choppy, to say the least. Revenue ebbs and flows with demand from construction, mining, and energy markets. When raw material prices are high, as they are now, and the economy is growing, the company does well. But demand can also fall off in recessions and weaker commodity environments. 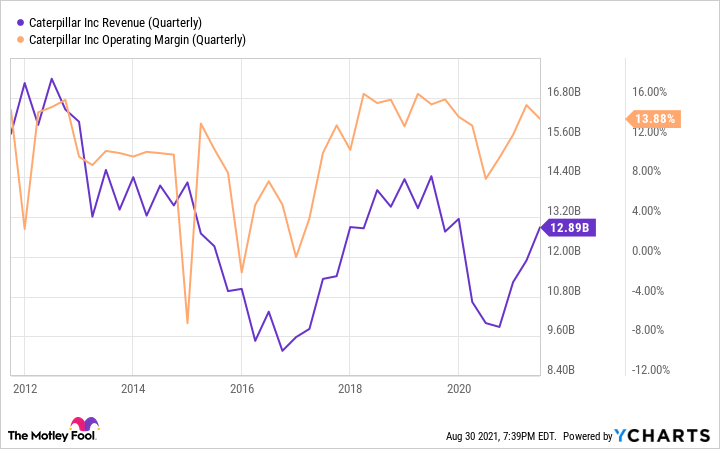 What investors should focus on is the long-term trends, which show revenue being fairly stagnant, so this isn't exactly a growth stock. The company can have spikes in demand, as it did a decade ago with the Chinese commodity boom, or as it is now with the rush of activity coming out of the pandemic, but the company isn't growing long-term.

So why is Caterpillar's stock up 140% over the last decade, and have shares run too far?

You can see in the chart below that Caterpillar's stock is up almost exactly in line with its price-to-sales-multiple expansion. Over the last decade, the stock is up 140%, and the price-to-sales ratio is up 122%. 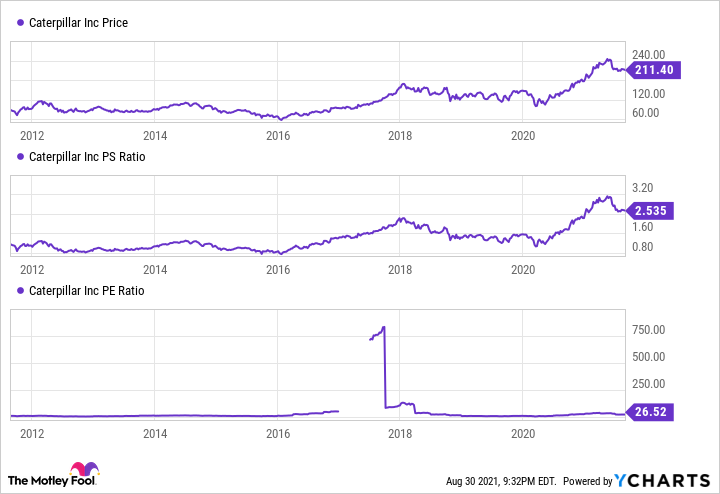 Over the same time, the price-to-earnings multiple is up 82%, showing that there has been more earnings growth than revenue growth.

I will also note that management has bought back about 17% of Caterpillar's outstanding shares over the last decade, which can help drive stock appreciation.

When you add it up, Caterpillar's stock performance over the last decade was largely driven by buybacks and multiple expansion, not growth. That could be a red flag for me in today's market. Paying up for growth stocks is one thing, but paying a premium for companies that aren't growing and that are dependent on commodities can be extremely risky.

Caterpillar is what's known as a cyclical stock, and you can see that its business continues to operate in cycles. According to Bloomberg's commodity spot index, raw material prices are at a 10-year high and near their all-time peak. Historically, that has led to a downturn in prices and ultimately equipment purchases. We don't know if the cycle is peaking now or if it will be next year or the year after, but historical trends suggest that mining and energy markets are likely to hit the peak of their respective cycles in the next few years.

Caterpillar's stock also runs in cycles, and right now it's near its all-time high. What I worry about is the fact that the expansion of the price-to-sales multiple and the price-to-earnings multiple has driven all of the stock's rise. Multiples may be expanding across the market, but betting on further expansion in multiples for a company that isn't growing long-term is speculative at best.

I don't think Caterpillar's stock is a buy today because it could have two factors working against it. Operations could suffer if there's a recession or if commodity prices fall. But the market could also rethink the multiples Caterpillar's stock deserves, sending shares even further from their all-time highs.

Earn Passive Income for Years With This Dividend Aristocrat
349%