Please ensure Javascript is enabled for purposes of website accessibility
Log In Help Join The Motley Fool
Free Article Join Over 1 Million Premium Members And Get More In-Depth Stock Guidance and Research
By Billy Duberstein – Sep 5, 2021 at 9:00AM

Despite already being fined earlier this year, Alibaba fell even more last month on continued concerns over the regulation of China's tech sector.

Shares of Chinese tech giant Alibaba Group Holding (BABA -3.82%) fell 14.4% in August, according to data from S&P Global Market Intelligence. Although Alibaba was the first large China tech company to be slapped with fines and regulations beginning late last year, the punishment continued in July, when it fell 13.9%, and into August, as the stock fell another 14.4%.

The culprits behind Alibaba's continued August malaise were an earnings report that missed expectations on the top line, as well as the continued, intensifying regulatory assault on China's internet giants. 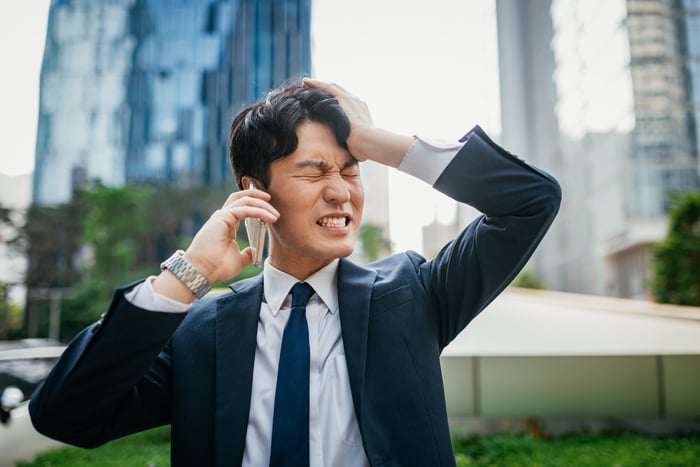 Early in the month, Alibaba reported quarterly earnings that beat profit expectations, but missed on top-line revenue. With sentiment so low, mixed results were likely enough to worry investors that regulations are beginning to bite into the company's financials.

Alibaba had previously used its first-mover advantage to box out rivals, often forcing brands into exclusivity contracts in order to access its market-leading e-commerce platform. But it was fined $2.8 billion in April for violating anti-monopoly rules and was ordered to stop that practice. The ending of forced exclusivity could strengthen ascendant challengers in the e-commerce space, so seeing Alibaba's revenue come in a bit lighter than expected was not a great sign.

As the month progressed, things didn't get any easier. In mid-August, the State Administration for Market Regulation issued a comprehensive list of rules that forbid tech giants from illegally capturing and using customer data, or using technology to bar access to competitors' products. As one of the larger and more powerful "legacy" tech platforms in China, Alibaba probably has more to lose on these fronts than competitors, as the rules are meant to level the playing field. The Ministry of Transportation also began work on rules to ensure the welfare of delivery drivers, which could affect food delivery costs for Alibaba subsidiaries Ele.me and Freshippo.

The slew of new regulations will no doubt hurt Alibaba's financials. But it's not like the company is going away anytime soon. After all, revenue did grow 34% last quarter, though it was only 22% when stripping out the effect of Alibaba's consolidating Sun Art retail.

After this brutal rout, the stock sure looks cheap, trading around 17.9 times this year's earnings estimates -- and this is including a significant net cash position and tens of billions of minority investments in other companies. Alibaba's stock had already attracted famous value investors Charlie Munger and Bill Miller earlier in the year, and its stock is much cheaper now. Therefore, for those comfortable with the risk of holding Chinese stocks, it's well worth a look.

Why Shares of Alibaba, JD.Com, and Li Auto Are Rising Today
356%