The stock rebounded from a 41% fall after its earnings report.

Shares of ATI Physical Therapy (ATIP -9.99%) climbed 26.1% in August, according to S&P Global Market Intelligence data. The company, which just went public in June with an initial public offering (IPO) via a special purpose acquisition company (SPAC), opened at $3.36 a share on Aug. 2, the first trading day of the month, and closed at $4.30 a share on Aug. 31. The big jump for ATI's stock came early in the month. On Aug. 3, it opened at $3.74 and closed at $4.50. 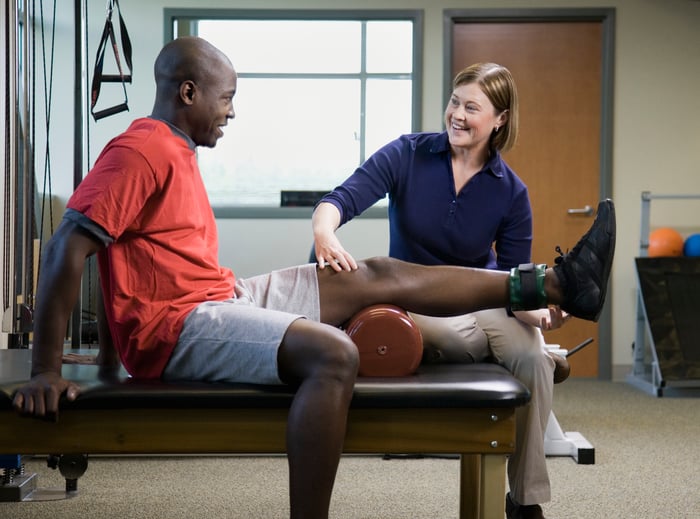 The stock's improvement in August had a lot to do with a reaction to an overreaction. Investors were overly concerned when ATI downgraded its forecast in its second-quarter earnings report on July 26, saying it expected yearly revenue to be between $640 million and $670 million, compared to earlier predictions of $731 million. It also said it expected adjusted EBITDA (earnings before interest, taxes, depreciation, and amortization) to be $60 million to $70 million, when it had earlier said it was expected to be $119 million. On top of that, the company said it was having difficulty with a labor shortage, which would slow its rate of opening new clinics.

The reaction to the report was swift, with the stock falling 41% in a day, and shortly after shareholder lawsuits were announced.

There are several reasons for the bounce back.

The company announced on Aug. 9 that its CEO, Labeed Diab, was stepping down; and it announced plans to search for a new CEO, with board member Jack Larsen being named executive chairman.

A clearer look at the company's financials may have also given investors reasons to be bullish on the stock. While people are less likely to go to a physical therapist during a pandemic, the company did report six-month revenue of $313 million, up from $290.5 million in the same period in 2020. The SPAC also allowed the company to pay its debt down to $561.2 million.

ATI Physical Therapy is a healthcare company that specializes in outpatient rehabilitation and healthcare services. As of June 30, it had 889 clinics listed in 24 states. The clinics handle everything from rehabbing injuries from a car accident to sports medicine to rehabilitation from worker's compensation injuries. There's plenty of growth forecasted in the industry, thanks to aging, but still active, millennials and baby boomers. According to a report by Coherent Market Insight, the global physical therapy rehabilitation solutions market was estimated to be valued at $23.1 billion in 2020 and is expected to have a compound annual growth rate of 7.7% through 2027.

There's plenty of good news here for long-term investors. The pandemic has continued to do a number on outpatient medical services, including physical therapy, but just as elective surgeries are expected to bounce back once the pandemic ebbs, the need for rehabilitation is expected to as well.