Retail investors are taking an interest in this gaming hardware stock, and trading volume recently surged.

High-performance gaming and streaming equipment company Corsair Gaming (CRSR 5.31%) saw interest in its stock spike early in the week of Aug. 30 as the retail investors on Reddit's WallStreetBets forum apparently called attention to its existence. Trading volume took off as mentions of the company on social media soared, and the stock climbed as much as 12% following the increased buzz.

The stock has a decent amount of short interest, so comparisons to famous meme stock GameStop are inevitable, but Corsair appears to have a more positive outlook overall, potentially making it a better investment -- even without a possible retail investor frenzy. 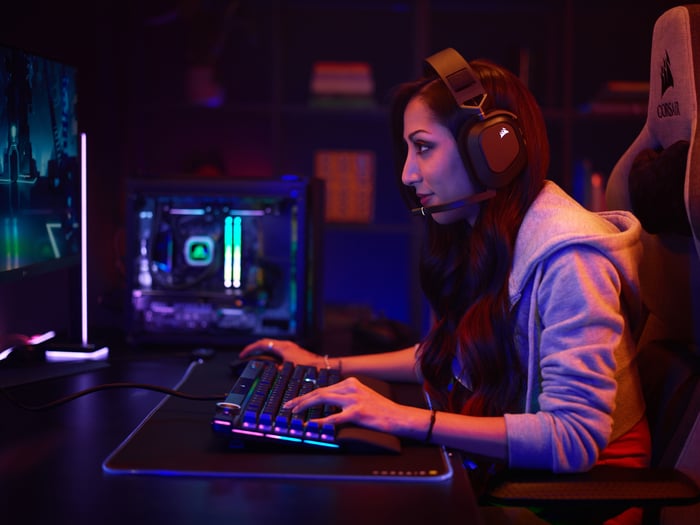 Alternative data researcher Quiver Quantitative reported a nearly 50-fold jump in references to Corsair on Reddit during a 24-hour period encompassing parts of Aug. 30 and 31.

Corsair Gaming doesn't have enough short interest for a similar squeeze, but Redditors may believe it does. This could potentially persuade them to buy into the stock as well. Anecdotally, many believe public short interest figures are the "tip of the iceberg," theorizing about countless millions of "synthetic shorts" being traded in "dark pools" behind the scenes. Current shorting could catalyze retail investing on this basis.

Corsair Gaming is a thriving company

Though the stock market reacted negatively to a slight earnings miss, Corsair turned in an outstanding second-quarter earnings report in early August. Highlights included 24% revenue growth and a rising gross margin. The company has a wide range of products, providing cutting-edge hardware for streamers, PC gamers, and console gamers alike.

In the earnings report, Corsair CEO Andy Paul stated, "The mid-point of our full-year outlook calls for run-rate revenue of $2 billion compared to our pre-IPO revenue of $1.1 billion in 2019 which shows our strong improvement since then." He added that the company is "investing in R&D, marketing and infrastructure" to further expand its product offerings in new directions, including premium web cameras.

It's also using its positive free cash flow to improve balance sheet health through deleveraging. During the second-quarter earnings call, CFO Michael Potter highlighted how the company "already paid down $53 million of our debt and expect to pay down approximately an additional $47 million for a total of $100 million of debt reduction in 2021." He added, "We're also looking to reduce the carrying cost of our existing debt significantly."

Video gaming trends also favor Corsair. According to research from the NPD Group, $4.6 billion in July video game sales were up 10% year over year. That month's 98% jump in gaming hardware sales is a bright spot for Corsair. In fact, NPD analyst Mat Piscatella singled out this growth: "Hardware is the biggest story from July, continuing what we've been seeing since the launch of the PS5 and Xbox Series consoles." He also said sellers "just cannot get enough units of the new consoles, and it's unclear when that might change."

While GameStop may also benefit from this trend if it plays its cards right, Corsair looks much better positioned to seize this growth opportunity.

Corsair stock might benefit from a retail investor boost if WallStreetBets investors do rally around the name, and the company achieves some measure of meme stock status. However, what's important is the fact this stock isn't dependent on retail investors or Redditors for its long-term success. Corsair is market-leading company in a fast-growing sector. Reddit retail investor interest could accelerate the rise of its shares, but Corsair has a bullish future in any case, making it well worth a look by anyone interested in video game stocks.

Buy This Undervalued Stock Before Everyone Else Does
349%