Please ensure Javascript is enabled for purposes of website accessibility
Log In Help Join The Motley Fool
Free Article Join Over 1 Million Premium Members And Get More In-Depth Stock Guidance and Research
By Jason Hawthorne – Updated Sep 7, 2021 at 10:00AM

In the stock market, what goes up doesn't have to come down.

Momentum can be a powerful force in the market. Stocks that are going up tend to keep doing so as more investors take notice. It can last for a long time, especially when the company keeps delivering awesome results.

Of the stocks entering the fall on a tear, three look primed to keep it going. MongoDB (MDB -2.00%), DocuSign (DOCU -0.69%), and Regeneron Pharmaceuticals (REGN 0.12%) are each at all-time highs. Digging into the details reveals why they show no signs of slowing down anytime soon. 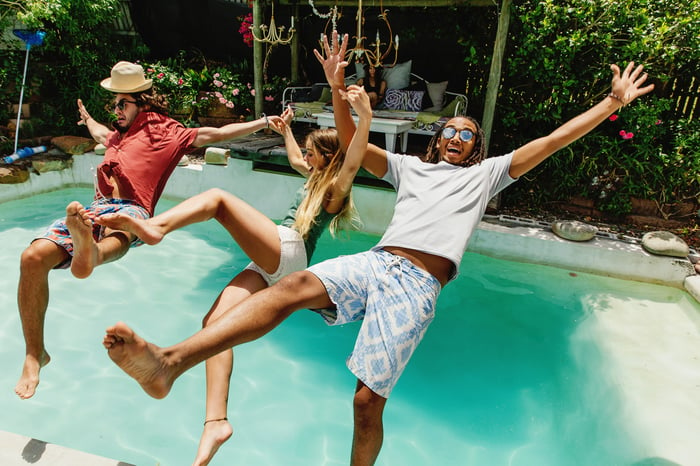 Traditional databases haven't changed much since they were first developed nearly a half-century ago. But what they are used for has changed a lot. The applications built to house tables of rows and columns, using structured query language (or SQL), simply can't keep up with the modern world.

Every day, humans create 2.5 quintillion bytes of data. As an example, it is estimated that 300 hours of video are uploaded to YouTube every minute. That's why MongoDB developed its Atlas cloud database service. It's based on the more flexible NoSQL ("not only SQL") and offers performance at scale. It can support large amounts of both structured and unstructured data, as well as objects like images and videos. And adoption is growing like crazy.

In the company's most recent quarter, Atlas revenue grew 83% year over year. That was an acceleration from the 73% growth it posted in the previous quarter and the 67% in the fiscal year ending with January. Atlas has overtaken the company's other subscription services to represent more than 58% of product revenue.

Wall Street is excited about the prospects. The stock is up 35% in the past month and 136% in the past year. The growth could just be getting started. According to IDC, the worldwide software market was estimated at $68 billion in 2020, growing to $106 billion by 2024. MongoDB's trailing-12-month revenue is a little over $700 million. That leaves a lot of room for this leader to keep disrupting legacy players.

As the name implies, the company facilitates electronic signatures for agreements of all kinds. Historically, getting and signing them has been a slow and error-prone process. DocuSign is helping everyone from sole proprietors to multinational corporations digitize those workflows. The stock is up 54% since June as every quarter makes it clearer that the business is firing on all cylinders.

In its recently reported results for its second quarter of fiscal 2022, there was an acceleration on several fronts. DocuSign posted $512 million in revenue for the three months ending with July. That was 6% better than the midpoint of its forecast. It beat its first-quarter guidance by 4%. Another area of expansion was cash flow. Cash flow from operations as a percent of revenue rose to 35%. That means that for every dollar of revenue, about $0.35 drops through for the company to spend on whatever it prioritizes. That number in the three quarters leading up to the report had been 15%, 14%, and 29%.

The company is quickly becoming a must-have application for businesses around the globe. International growth came in at 71% year over year in the second quarter. It's succeeding by integrating with other large software applications. Management lists Oracle, Microsoft, Alphabet's Google, Salesforce, and Workday to name a few.

It might not be obvious at first glance just how many agreements there are in life. With applications for a myriad of use cases including mortgages, federal documents, and notaries, DocuSign estimates its total addressable market at $50 billion. That could mean the stock has a lot of room to run despite the recent gains.

Regeneron might be best known for its monoclonal antibody treatment for COVID-19. Treating a president during a global pandemic will do that. But the company has a history of growth and innovation. It also has a bright future. The stock is up 47% since March. Looking at recent results, it's obvious why.

Its second-quarter revenue climbed 163% year over year to $5.14 billion. That was boosted by its COVID treatment, Regen-Cov. Even without it, sales grew 22%. Eylea, its drug for age-related macular degeneration (the leading cause of irreversible blindness and a disease that affects 11 million Americans), brought in $1.4 billion in the quarter and $2.8 billion for the first six months of the year. That was up 28% for the quarter and 21% compared to the first half of 2020.

That's nothing new for Regeneron. Heading into the pandemic, the company had averaged more than 35% annual growth over the past decade. It has plenty in the pipeline to keep that up. Sales of its allergy drug Dupixent, developed with partner Sanofi, increased 59% in the latest quarter. The drug is primarily used to treat asthma and eczema but has shown benefits in five diseases. There could be more. The companies are well into clinical trials in several other indications.

Another partnership is responsible for the most exciting drug in the company's pipeline. Along with Intellia Therapeutics (NTLA -0.42%), Regeneron reported the first-ever successful treatment by editing genes inside the human body. In the phase 1 trial, the therapy served as a functional cure for a rare liver disease.

With the monoclonal antibody market estimated at $143 billion and poised to grow more than 14% per year, Regeneron would have a bright future even without the Intellia partnership. Add in the potential for gene-editing and you get a $72 billion company that could grow to rival the largest pharmaceutical companies in the world over the next decade.