Again, Moderna is one step behind big rival Pfizer.

The U.S. is ready to launch its coronavirus vaccine booster program as of Sept. 20. Vaccine leaders Pfizer (PFE -0.33%) and Moderna (MRNA 0.48%) have been preparing for this moment for months. Both launched booster programs earlier this year with the emergence of various coronavirus strains. And both recently submitted booster data to the Food and Drug Administration for review.

But Dr. Anthony Fauci, the White House chief medical advisor, says a regulatory decision on the Moderna booster candidate might not meet the government's booster program rollout date. The FDA is likely to issue a decision on the Pfizer booster, however. The agency has already set an advisory committee meeting to review it on Sept. 17. Initially, this might seem like bad news for Moderna. But Fauci also said something that should ease any worries. 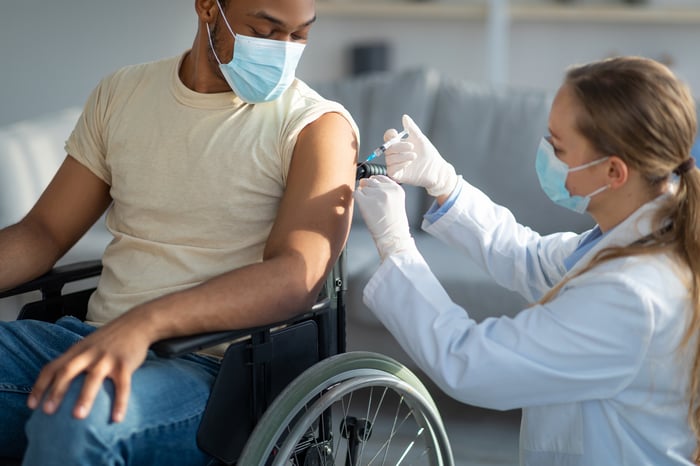 In an interview with CNN, which was also picked up by CNBC, Fauci said that for people who have received two doses of the Moderna vaccine, "it's better to wait" for the Moderna booster than to take the Pfizer one. Fauci also said on CNN that the rollout of the Pfizer and Moderna vaccines might be "sequential by a week or two." Until hearing Fauci's words, we could have had two concerns about any delay in Moderna's booster program.

First, there's the possibility that people who've received the Moderna vaccine might go for the first booster available. And that's probably going to be the Pfizer one. But as we see above, Fauci advises against mixing and matching. In fact, health authorities have regularly said it's best to stick with the same vaccine. There has been some research on mixing and matching vaccines. And it's possible authorities may eventually recommend it. But I don't expect that to happen immediately. The U.S. is trying to rapidly launch a well-organized booster program. And the way to do that is to direct individuals to stick with their original vaccine maker.

On to the second concern: Some worry that a delay in reviewing the Moderna booster candidate would add several weeks or even months to the timeline. By that point, individuals who've been fully vaccinated by Moderna might lose patience. As a result, they may try to get the Pfizer booster whether it's recommended for them or not. Or they may be more likely to opt for Pfizer or another vaccine maker further down the road. But Fauci's words reassure me about the timeline. Most people aren't going to mind waiting a week or two to get a booster.

And we've seen that Moderna hasn't suffered from being one step behind Pfizer from a timeline perspective. Pfizer's coronavirus vaccine also hit the market before Moderna's. But Moderna still shares leadership in the U.S. market with the pharmaceutical giant. Sure, Pfizer has vaccinated a greater number of Americans -- 95 million versus 66 million for Moderna. But Moderna still expects $20 billion in vaccine revenue this year. And the vaccine is bringing in billions of dollars in profit for Moderna: $2.8 billion in the most recent quarter.

So, what's likely to happen in the coming weeks? No one can say for sure whether the FDA will authorize the Pfizer and Moderna booster candidates. But the data both companies have released so far have been promising. There's reason to be optimistic. It's very likely the booster rollout will mimic the rollout of the vaccine last December. Pfizer probably will launch first. Then Moderna could follow shortly thereafter.

People probably will opt for the booster that matches their original vaccine series. The U.S. already has ordered these doses from the companies. So all of this doesn't equal more revenue right on the spot. But down the road, it does. A booster means countries must order three vaccine doses per person instead of two.

Getting back to my original point: A short delay in the review of Moderna's booster won't hurt demand for the shot or vaccine revenue. So it shouldn't hurt your view of Moderna, either.