PepsiCo does better when people eat and drink at home.

According to the National Bureau of Economic Research (NBER), a recession is the period between a peak of economic activity and its subsequent trough, or lowest point. In other words, it's a time of decreasing spending, decreasing employment, and decreasing consumer confidence.

Again, according to NBER, the most recent recession in the U.S. was between February and April of 2020. That's understandable. The time coincided with the initial COVID-19 outbreak and ensuing stay-at-home orders, which kept people away from stores, restaurants, and shopping centers.

Interestingly, some companies are better prepared to deal with recessions. Their businesses match the way consumer behavior changes in times of economic pressure. Let's look at how PepsiCo (PEP -0.11%) is likely to keep more of its revenue during a recession. 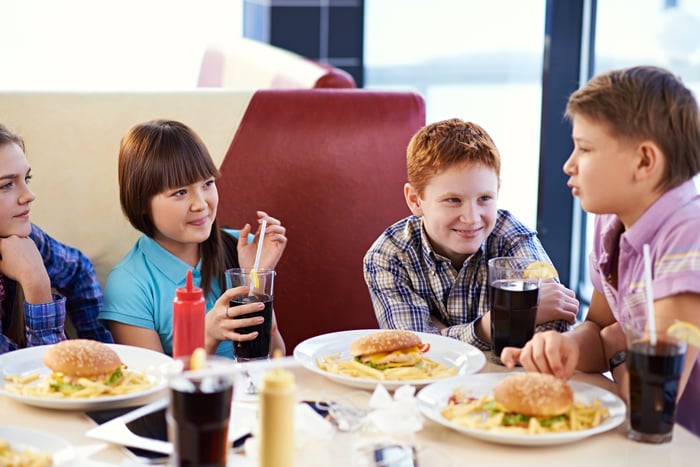 Coca-Cola (COKE 1.51%) has a higher market share in away-from-home channels like restaurants, theme parks, and movie theaters. The company has spent years cultivating relationships and reaching exclusive agreements with vendors in those channels. This works in its favor in times of economic expansion but hurts it during recessions. When people's incomes fall, they are more likely to eat meals and entertain themselves at home. Even the fortunate households whose income is not falling tend to increase their savings in times of economic contraction, out of fear they may be next to lose their job or get a pay cut.

Since PepsiCo has less exposure to the more expensive channels, it is less affected during recessions. 2020 showcased this difference when sales for Coca-Cola decreased by 11.4%, while PepsiCo's increased by 4.8%. The outperformance was helped by PepsiCo's snack segment, which benefited as people stayed home and ate at home more often.

Although the next economic recession may not be as pronounced, PepsiCo is likely to do better in it compared with Coca-Cola. The companies have not structurally changed all that much, so the same dynamics are likely to play out again. Of course, no other recession will be quite like the one caused by the coronavirus pandemic. However, you can expect a similar consumer response during every recession: a tightening of the financial belt.

This means that investors deciding between PepsiCo and Coca-Cola can consider the added slight degree of portfolio protection of owning PepsiCo. If you are so brave as to try to time the market, a feat I would not recommend, then you can choose Coca-Cola at the beginning of expansions and PepsiCo when you feel economic growth is reaching a tipping point.

So rather than trying to time the market, it would be prudent to add both of these excellent businesses to your portfolio and let them quench your thirst for returns.