Sticking with well-known names can be a smart move.

The fall months have historically been tough ones for the stock market, and by now, it seems like the prospects for declines in markets during September and October are just as likely to be a self-fulfilling prophecy as anything. Regardless of the reason, investors were downbeat on the market on Wednesday, and that led to declines for the all three major market benchmarks. The Nasdaq Composite (^IXIC -0.18%) suffered slightly larger declines on a percentage basis, losing its dominance over the S&P 500 (^GSPC -0.12%) and Dow Jones Industrial Average (^DJI 0.10%).

However, some stocks managed to buck the downtrend. In particular, the consumer staples arena performed fairly well, and major players General Mills (GIS 1.29%) and Kraft Heinz (KHC 0.86%) posted solid gains. Below, we'll go into more detail about what had shareholders in these food companies feeling better about their prospects Wednesday. 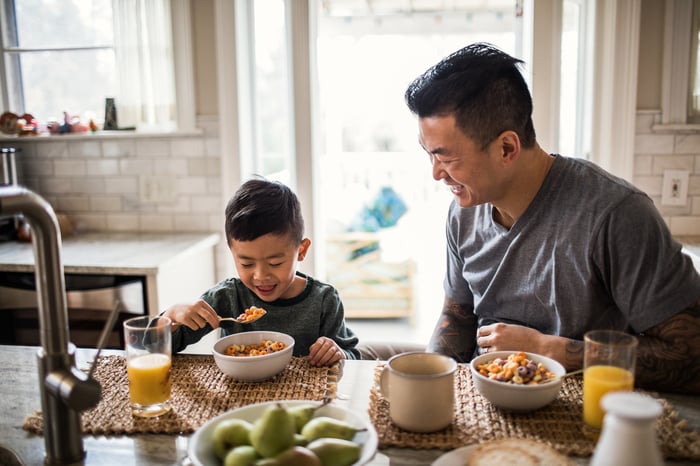 General Mills is looking up

Shares of General Mills finished the day up almost 5%. The maker of cereal and other foods provided a review of its business and financial outlook in connection with a global consumer staples conference, and what it had to say made investors more upbeat about its long-term prospects.

General Mills identified several priorities it has for its future growth. First, it expects to boost its competitiveness through strategic execution. It's also aiming to control costs by taking direct action to fight inflation and other headwinds, including work to boost margins and pass through cost increases by using its pricing power. And finally, the company wants to make reorganizational moves like acquisitions and divestitures effectively without disturbing its core business.

General Mills also gave favorable guidance for the remainder of its current fiscal 2022 year. It now sees organic net sales falling less sharply, near the higher end of its previous range of down 1% to 3%. General Mills also sees the potential to come in flat in adjusted earnings per share compared to year-earlier levels.

The food business is a tough one, and all the more so when cost pressures are affecting the industry. Nevertheless, General Mills is pulling out all the stops to bolster its growth in the years to come.

Meanwhile, shares of Kraft Heinz closed higher by nearly 4%. The company also presented at the same conference and made its case for its own competitive advantages.

Kraft Heinz went through all the actions it has taken as part of its transformation plan over the past 18 months. CEO Miguel Patricio emphasized that the combination of using Kraft's massive scale while still retaining the agility to jump on interesting opportunities as they arise is a cornerstone of his vision for the company's future. Other executives chimed in with how Kraft is meeting modern consumer needs, and it's looking at new ways to manage cost increases while still delivering products that will result in repeat purchases from customers.

Specifically, Kraft Heinz has boosted prices in about two-thirds of the products in its U.S. brand portfolio. If input costs keep rising, the company will pass those higher expenses to consumers through additional price hikes.

Kraft sees 2022 demand remaining solidly above pre-pandemic levels, and it hopes to use its pricing power to sustain margins and maximize profits. That's been a winning recipe for years, and Kraft expects it will remain attractive for those looking to invest in the stock.