Don't be fooled by their miniature market caps -- these small stocks could deliver big returns in the long run.

Small-cap stocks -- tickers valued between $300 million and $2 billion -- have generally performed about as we as their larger brethren over the last decade. However, that long-term trend snapped in 2018. Large-cap tickers continued to track right alongside the S&P 500 over the last three years while small-cap stocks started to lag behind. The coronavirus pandemic only amplified this shifting market tenor. Many economists expected the pandemic to trigger a huge spike in bankruptcies and much lower corporate profits, but we actually saw the opposite of that scenario playing out: 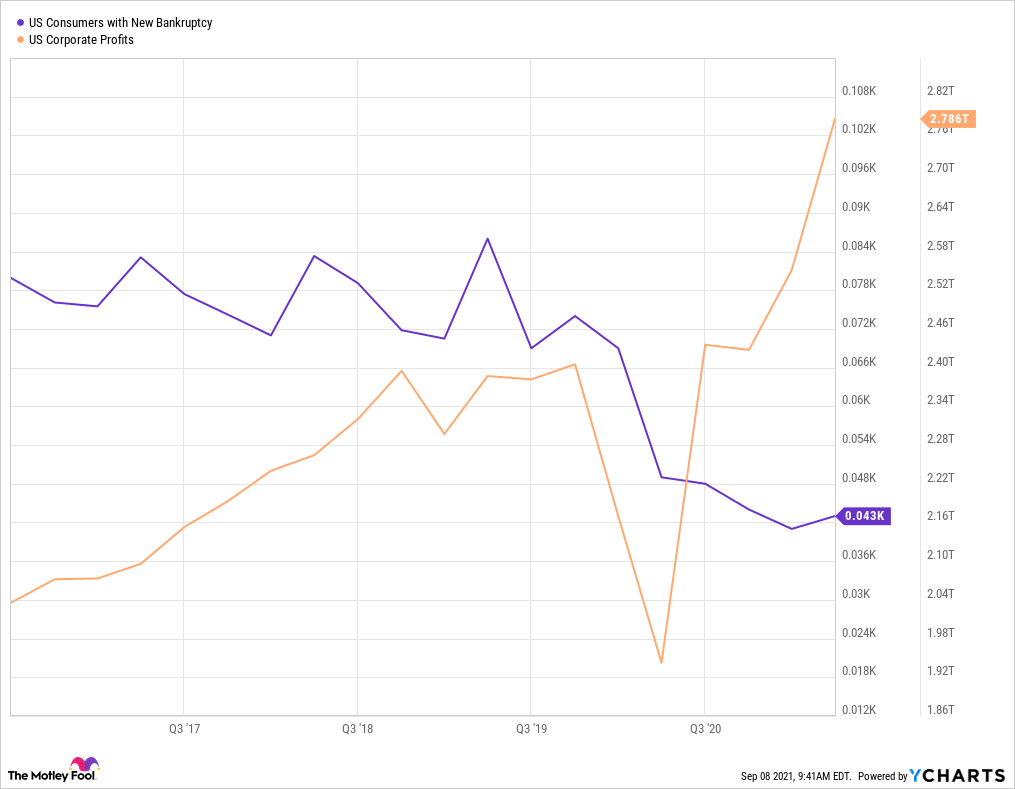 US Consumers with New Bankruptcy data by YCharts

Smaller companies played a large part in this positive development. At the same time, market makers shifted their holdings away from investments such as small caps and extreme growth stocks to focus on larger and safer stock ideas instead.

As a result, more than a few small-cap stocks have taken serious haircuts recently, even though their business prospects are as bright as ever. On that note, here are two small-cap stocks whose stocks seem spring-loaded for lucrative comebacks as their share prices have dipped at least 30% lower in 2021.

Digital video technologist Brightcove (BCOV -0.89%) has seen its share prices fall 35% year to date, but the stock is also up by a respectable 45% over the last three years.

Investors were thrilled by Brightcove's business prospects in the early days of the COVID-19 lockdowns, as streaming video entered the mainstream of American culture in a big way. Unfortunately, they were also quick to lose patience with the stock as the pandemic didn't immediately result in torrential growth for Brightcove.

The company more than pulled its weight, though. Brightcove exceeded Wall Street's estimates across the board in each of the last five earnings reports. For example, July's second-quarter update saw an earnings jump year over year from $0.07 to $0.11 per share while revenue rose 7% to $51.5 million. Your average analyst would have settled for earnings near $0.03 per share on sales in the neighborhood of $50.1 million. Yet, investors were unimpressed and Brightcove's stock fell more than 18% the next day.

Management set up modest sales targets for the next quarter, reiterating its long-term focus. As Brightcove plans to boost its long-term revenue growth through sharply higher sales and marketing budgets, earnings will slow down over the next few quarters. That's catnip for investors with a long-term time horizon but more of a repellent for impatient day traders.

Brightcove is setting the stage for an impressive growth spurt over the next few years. Sales are growing and the company is profitable. At the same time, the stock chart would make more sense if Brightcove was preparing for bankruptcy. Mismatches like this can be a gold mine for risk-tolerant investors in the long run. 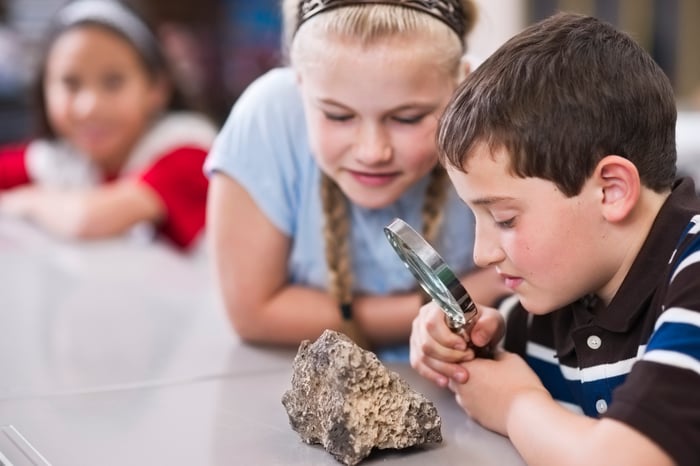 Did you find any gold yet? Image source: Getty Images.

Financial technology specialist Katapult Holdings (KPLT 2.36%) is down 48% this year, technically speaking. However, that year-to-date return goes back to a time when Katapult hadn't closed its special purpose acquisition company deal. The stock was known as FinServ Acquisition Corp at the start of 2021, trading under the ticker FSRV. Measuring from the first day of post-SPAC trading as Katapult on June 10, the stock is trading 53% lower.

If you thought the first-quarter report's market reaction was harsh, let me tell you about the second-quarter report on Aug. 10. Top-line growth slowed down to 27.6%, and the company posted an adjusted net loss of $8.1 million. As a result, share prices plunged 56% lower that day.

Katapult mended some of the damage last week when Affirm Holdings integrated its installment-style payment service into the Amazon e-commerce experience. Affirm is a close partner with Katapult. Many investors see Amazon's adoption of installment payment plans as a first step toward using Katapult's lease-to-own plans for higher-priced items.

Both Katapult and Affirm appear to be poised for bright futures in the consumer-facing fintech world. But the two stocks could hardly be more different. Here's how they have moved since Katapult completed its SPAC merger: 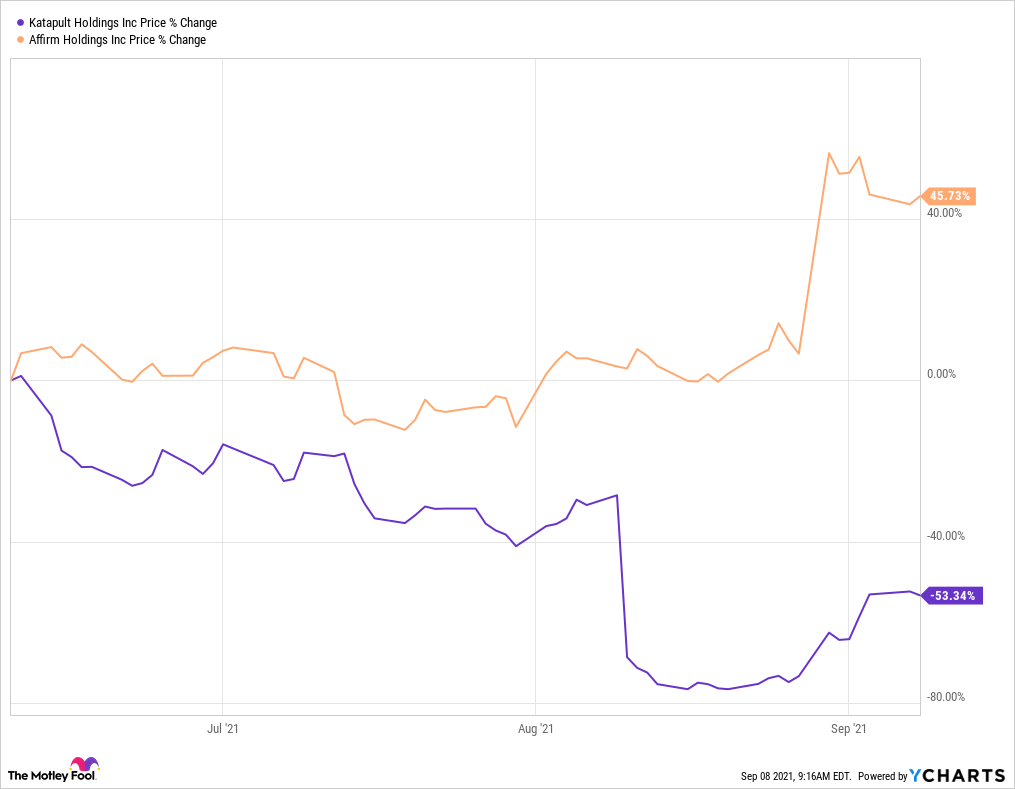 Affirm is already a large-cap ticker with a $25.8 billion market value, trading at nearly 37 times trailing sales. Katapult, on the other hand, is a low-priced minnow. You can pick up shares at just 3.5 times trailing sales. The negative market reactions to Katapult's first couple of earnings reports have opened a fantastic buying window for this promising financial technology stock.