The other is taking a sizable hit.

It's amazing just how much the Nasdaq Composite (^IXIC -0.18%) has been able to outperform the broader market lately. It seems as though nearly every day, the Nasdaq either rises more than other benchmarks, loses less, or manages to post a gain when other indexes are falling. That was the case again in premarket trading on Wednesday, as Nasdaq futures were down less than those of other indexes.

Nevertheless, cross-currents affect the Nasdaq just as much as other stock markets. On Wednesday morning, there were a couple of big-moving stocks, with Coupa Software (COUP 0.37%) making a big move higher even as Bumble (BMBL 1.14%) moved lower. Below, we'll look at why Coupa scored a coup while Bumble saw its stock price stumble. 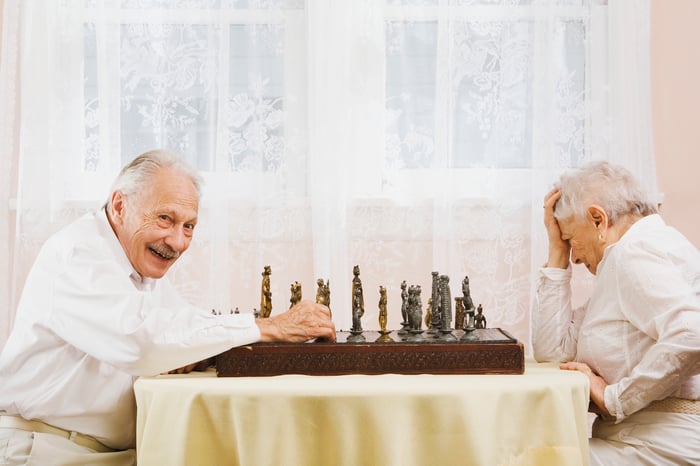 Coupa saw revenue rise 42% year over year, with subscription revenue climbing 40% to $156 million. New customer additions were a big part of that increase, as Coupa welcomed big names like the global soccer governing body FIFA, South African energy giant Sasol, and the real estate company Walker & Dunlop. Moreover, net income rose on an adjusted basis, with earnings of $0.26 per share up a nickel from year-ago levels.

Guidance for the third quarter and full year were also encouraging. Coupa projected revenue of $177 million to $178 million for the period, of which all but about $19 million will be subscription-based sales. Adjusted earnings should come in around $0.01 to $0.03 per share. For the full year, Coupa's total sales are likely to be between $706 million and $708 million, with adjusted earnings of $0.27 to $0.29 per share.

Coupa has frustrated some investors with its sluggish stock price amid the Nasdaq's big gains. However, those investors are hopeful that this could finally break the ice and get Coupa moving substantially higher.

A bad date for Bumble?

Meanwhile, Bumble saw its stock drop about 4% in pre-market trading. Even though the reason for the move had nothing to do with the company itself, investors weren't happy to see some of their comrades decide to sell out.

Late on Tuesday afternoon, Bumble announced that certain shareholders affiliated with Blackstone (BX 0.14%) had registered a secondary offering of 15 million shares of Bumble's stock. The offering won't raise any new capital for Bumble, but it will give Blackstone the opportunity to sell out at a reasonably good price.

The move came as Bumble had jumped more than 20% in the past month. After a long period of poor performance, investors were starting to think that the dating website operator had finally turned the corner amid favorable fundamentals in the industry.

As is, though, shareholders weren't happy to hear the vote of no confidence from Blackstone. It's not as though the move had taken Bumble to all-time highs, and some buyers soon after Bumble's IPO in February are still sitting on losses. Unfortunately, some will draw the conclusion that Blackstone doesn't think Bumble is a long-term winner, and that could prove problematic for those shareholders who are still along for the ride.

Markets Fall Again, But These 2 Stocks Are Heading Higher
376%